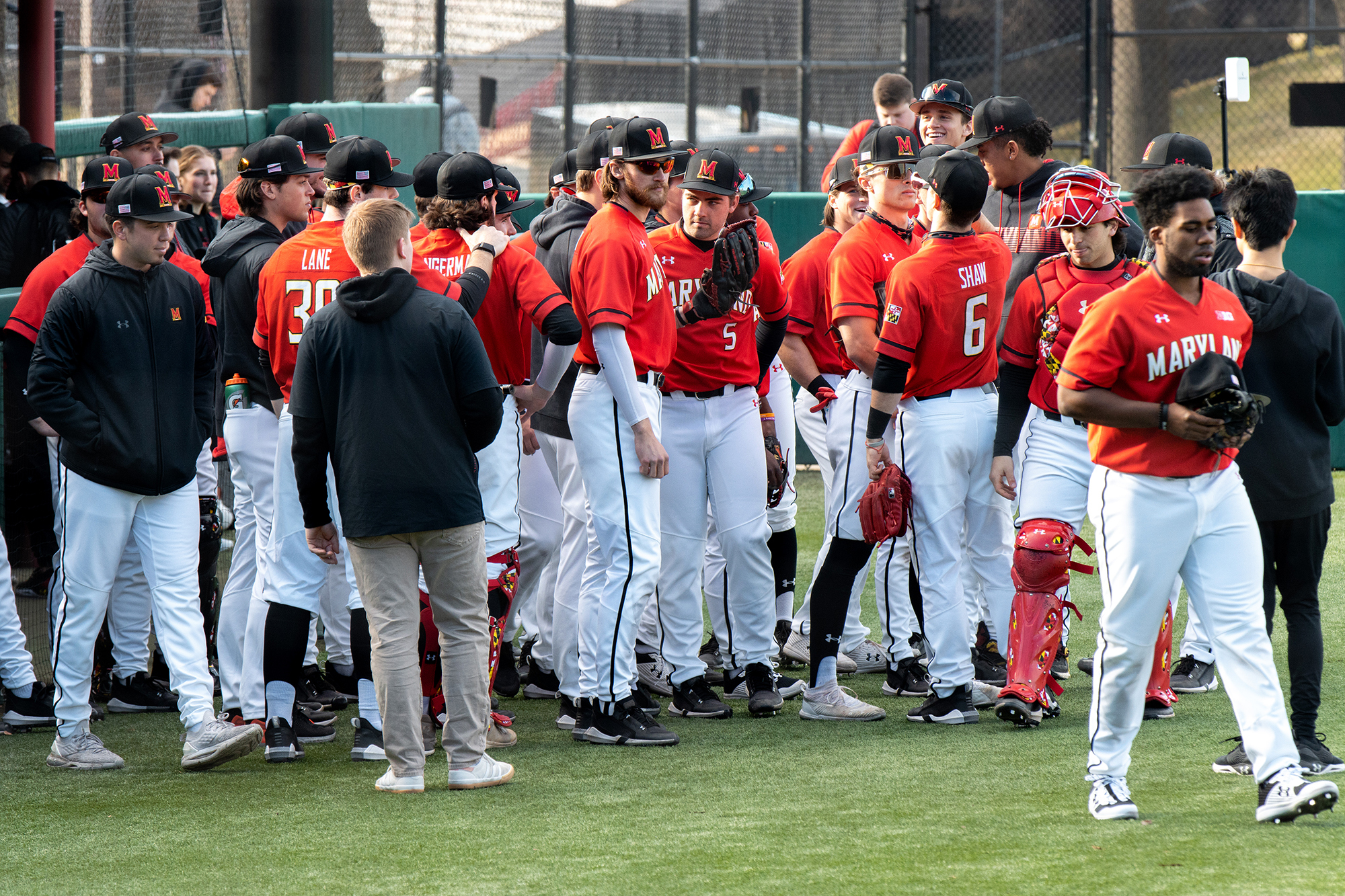 Maryland baseball assembles before the beginning of its game against Delaware at the University of Maryland on March 1, 2022 (Kurt Leinemann/The Diamondback).

But facing skillful pitching, the Terps couldn’t find their way onto home plate. And once again, Maryland faced heartbreak against the Pirates in North Carolina.

Unable to recover from an early scoring spurt from the Pirates, Maryland fell to East Carolina, 6-3.

Not too long ago, Maryland baseball laid its eyes on Clark-LeClair Stadium with visions of trophies and accolades against East Carolina in the Greenville Regional Final. Sunday, they did so searching for their tenth win against the same opponent.

And despite an early Terps lead, the Pirates did nothing short of raiding their opponent from the outset. With the wind aiding them, East Carolina took off in the third inning with a gigantic assist from a two-RBI bomb to right-field slugged by Bryson Worrell.

With Jason Savacool cracking further on the mound, the Pirates added an RBI-double and a RBI sacrifice fly to pile on to make it 5-1 East Carolina. The latter run came from a double-play, which assisted Maryland in shortly finishing out the inning afterward.

Devoid of momentum on the mound, the Terps still had Max Costes in the batter’s box.

Slamming a long ball to center, Costes watched the Pirates’ outfielders run to the wall in vain as the ball flew over in quick fashion. While only a single run, the homer helped snap the Pirates’ momentum and keep the score close at 5-2.

That was shown best as Savacool went back to work, managing a clean inning that ended in a double play to send East Carolina back to the dugout.

The sophomore settled down the next few innings to give the Terps a chance to tie it up with the Pirates. But two crucial missed opportunities for Maryland looked to define its offense in the game.

Luke Shliger and Troy Schreffler both found themselves with the bases loaded and two outs in the sixth and seventh, respectively.

Both fell short. Shliger and Schreffler stranded six runners combined as their hits both couldn’t travel the requisite distance away from the Pirates.

As a result, the Terps seemed desperate for runs in the eighth. Maryland was presented one more opportunity with a runner on second and Chris Alleyne at the plate.

[Maryland baseball drops first game of the season to Michigan, 7-4]

With two strikes on his count, Alleyne rocked his bat up and down in anticipation of the pitch.

He swung and missed.

Alleyne punched out to relegate the Terps to one final chance to tie East Carolina and force a bottom of the ninth.

With Matt Shaw, Nick Lorusso, and Bobby Zmarzlak collectively coming up short in the final frame, Maryland fell to 1-2 on the weekend series and 9-2 overall with the 6-3 defeat.