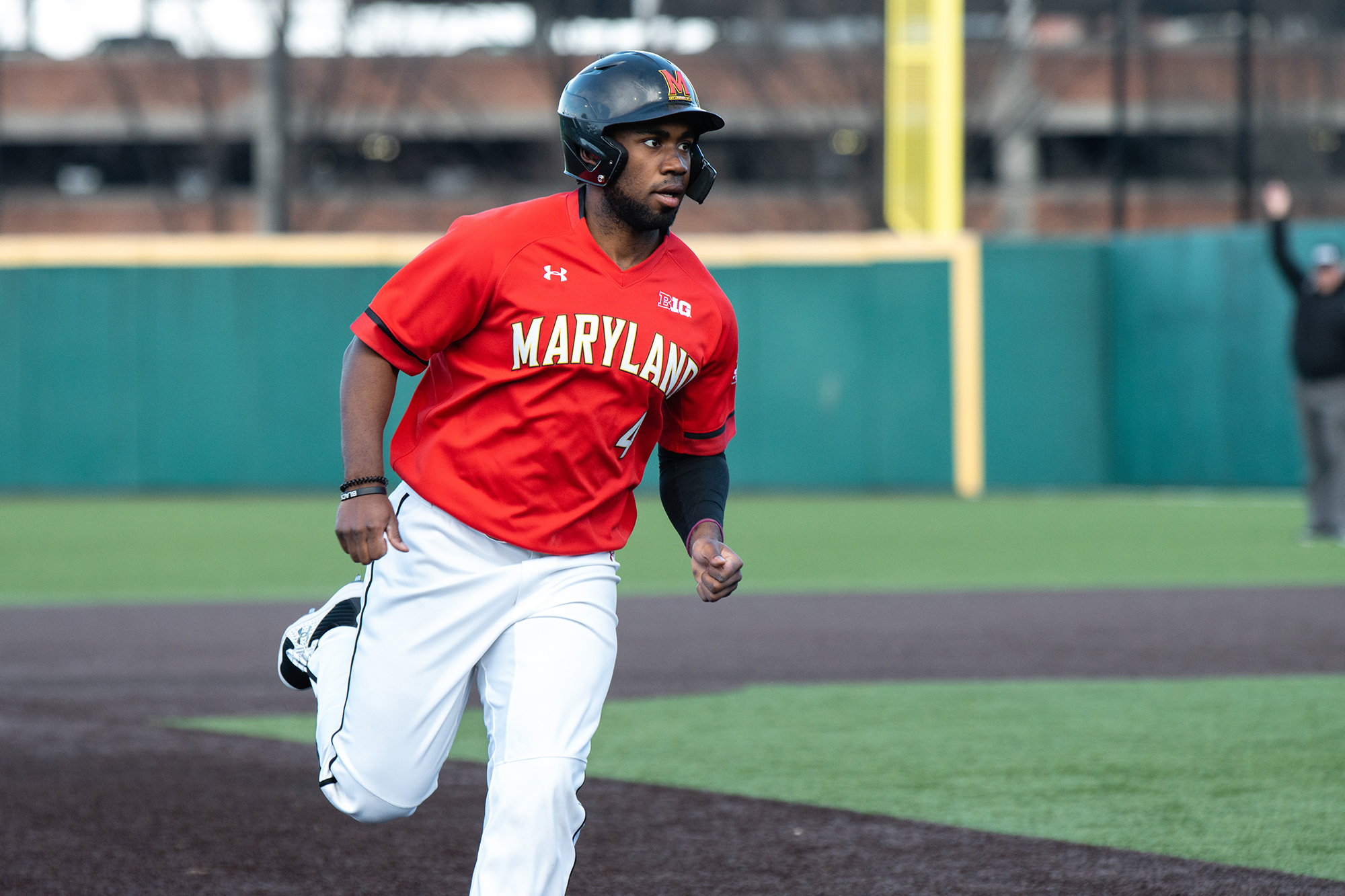 UMD Terrapin Maxwell Costes runs home at the UMD vs Delaware game on March 1, 2022 at the University of Maryland (Kurt Leinemann/The Diamondback).

Crushed by its first loss of the season dealt by Michigan, Maryland baseball needed a jump-start.

Slow through three innings, it appeared they wouldn’t get it. The loss looked to linger.

Managing a few runners on base in the fourth inning, their hitters crushed that narrative as the Terps motored ahead to a tie and continued to rack up runs to a decisive end.

Catapulted ahead by a trio of runs in the fourth, Maryland rebounded with a 12-6 win over Indiana State.

“From the offensive standpoint, we just finished better today,” coach Rob Vaughn said. “…we just didn’t finish [yesterday] and I told our guys regardless of how it starts I want us to finish and I want us to be known offensively as the guys who finish games.”

Trouble carried over for Maryland against Indiana State after Friday’s first loss of the season. But from the first at-bat, one wouldn’t know it.

Luke Shliger slapped a single up the middle on the first pitch and then the Terps proceeded to load the bases with only one out for Bobby Zmarzlak. With good early positioning, Maryland had the chance to set the tone and pull away quickly.

The umpire punched him out.

But with Max Costes up, the Terps still had a chance with their consistent hitter. That thought quickly faded as Costes flew out to strand all three runners.

“I wish we wouldn’t have [stranded the runners],” Vaughn said. “Their starter had really good stuff…one of those things you wish you could have got out there and cash something in the first.”

The bad omen came to fruition quickly. Indiana State jumped out to a lead following a solo homer and RBI double in the second and more theatrics in the third as Ryan Ramsey grew unsteady on the mound.

[Maryland baseball drops first game of the season to Michigan, 7-4]

A solo homer by Chris Alleyne brought Maryland a bit closer in the third as well, but Indiana State still maintained a 4-1 lead.

A huge response in the fourth would flip the game on its head.

Maryland, in the same situation as in the first inning, took advantage. Riley Langerman landed his first hit of the season to jumpstart three straight at-bats with contact, all driving runs.

Troy Schreffler knocked a decisive two-out, two-RBI homer to continue his hot start at the plate this season, putting Maryland in front for its first lead of the game in the fifth.

Ramsey found the right time to shake out of his early slump as well, throwing two scoreless innings before faltering and being relieved at 100-plus pitches in the seventh. Matt Orlando finished the inning, but not before the Sycamores crossed another runner to bring them closer.

In the eighth, Maryland’s best performed when it counted.

Utilizing the top of their lineup, the Terps landed a pair of base runners on first and third for Matt Shaw. Shaw had been ice cold all weekend, 0-for-3 on the day before his at-bat in the eighth.

He made it all irrelevant with one swipe of the bat.

Slashing a two-RBI single up the middle, Shaw started the rally that would put the Sycamores away as Maryland added six runs in the final two innings.

With Ryan Van Buren closing, the Sycamores couldn’t manage the large deficit and ceded the game to the Terps.

“When Ryan Van Buren is going out there in a seven-run game vs a three-run game that’s a lot different,” Vaughn said. “It lets him breathe a little bit…that’s what we have to be: we have to finish baseball games. I thought we played a complete nine innings today.”