Maryland baseball drops first game of the season to Michigan, 7-4 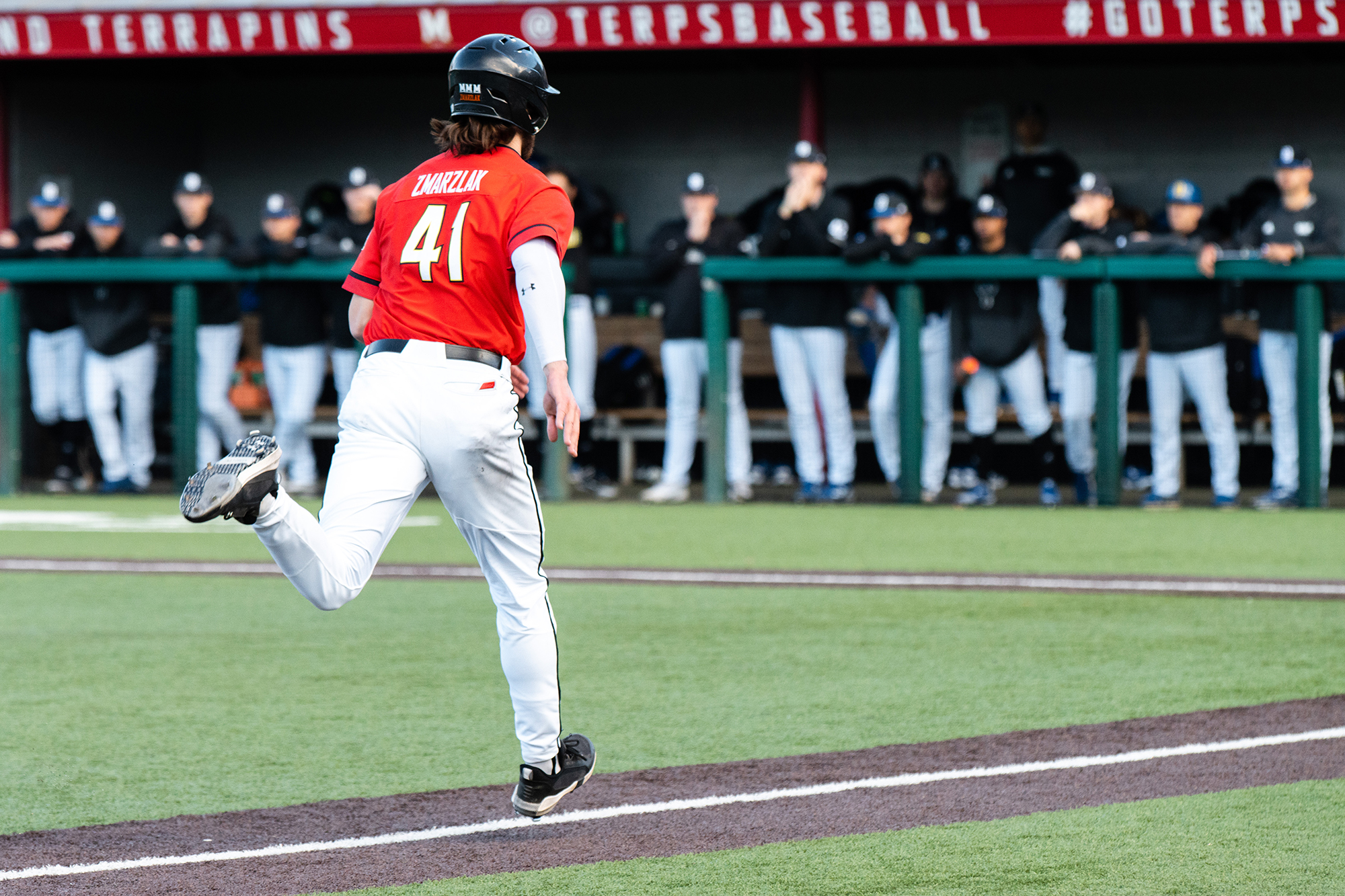 Maryland baseball hadn’t touched adversity for most of the season.

But as Joey Velazquez pinch-hit in the eighth inning, it learned what it was like. The junior cracked the deciding hit and the Terps could only watch as the ball carried and clinched the game for Michigan.

“We’ve had some things that have gone our way and that’s what you have to have when you win eight straight,” coach Rob Vaughn said. “The reality is, they hit a three-run jack off the foul pole today. That’s the bounce going the other way and that’s baseball.”

Maryland was presented with an opportunity for an early crack at a Big Ten opponent — despite the game not counting for conference play, the Terps embraced it.

Still operating with zero earned runs on the season, Nick Dean had the first crack at Michigan on the mound.

As usual, he did not disappoint.

He managed a tough group of Wolverines batters including Jimmy Obertop and Clark Elliott and Dean shut out Michigan through the first five innings. Maryland’s best pitcher did run into some trouble —- the third inning saw the bases loaded with Obertop up to bat. Thankfully for Dean, he flew out to right to end the inning.

The catcher put the offense on his back as he rocketed a three-run homer in the second frame to give Maryland a firm-early lead.

Shliger added a triple in the fifth — later scoring via a Chris Alleyne ground out.

“I was just trying to stick to the same plan,” Shliger said. “Just trying to be on time with everything and trying to get the barrel out.”

But while Dean managed most of the way, the sixth inning was his downfall.

Nick Dean’s play grew visibly inefficient in the sixth as he allowed two to get on. A double along with a fielder’s choice scored two runners — the first two runs Dean has let up all season. Will Glock quickly replaced Dean to close this one out as he ended the inning on a ground out.

Michigan ran into its own pitching troubles on its next trip out on the mound. Cameron Weston took his leave and the next pitcher for the Wolverines’ suffered some throwing troubles as well. Before Maryland could take advantage though, Michigan retired Sean Lane and Shliger to the dugout.

“The story of the game on the offensive side of the ball is we had some opportunities,” Vaughn said. “We were 1-for-3 with a runner on third, less than two outs and we’ve been really good there. We punched out 13 times and they punched five, that’s a huge difference.”

[Bottom of the lineup drives Maryland baseball past Delaware, 14-4]

But the Wolverines didn’t let Maryland pull away as they hung on to a slim lead. But not for long.

Will Glock’s fourth batter changed things quickly. Riley Bertram cracked a two-RBI homer to tie the game up as his teammates crowded home plate in celebration.

A familiar face stepped up into the box in the next inning. Velazquez took his chance.

Velazquez, a Michigan football player, once tied the Terps last season and sent a game into extras. In this one, he crushed the winning hit.

Slamming a ball to left that looked like it could go foul, Velazquez ran to first as the ball carried, and was ruled a homer. The three-RBI jack put the Wolverines in front definitively.

Unable to force a rally of its own in the final inning, Maryland earned its first loss of the season at the hands of a Big Ten rival.

”I thought arms competed for us, just made a couple of mistakes and they took advantage of it,” Vaughn said. “I told our guys, we had to deserve to win. I just didn’t think we were good enough today.”