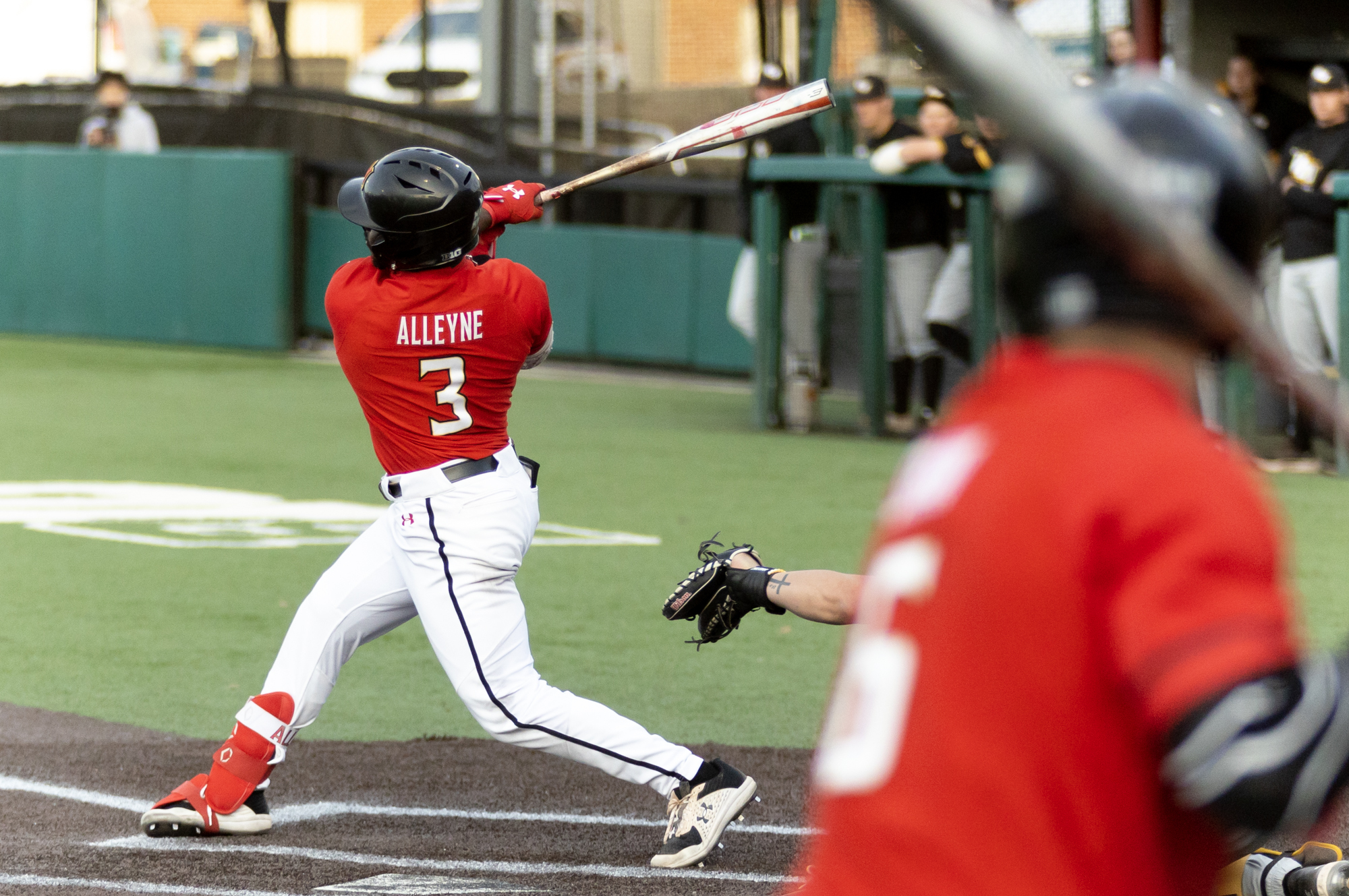 Inheriting a jam with two runners on and one out, Will Glock could’ve easily misfired from the mound to create an opportunity for VCU to tie and force a bottom of the ninth.

Adding one more runner, it became even more pertinent for Glock to deliver. The Rams’ Marcus O’Malley squared up to Glock in the batter’s box. O’Malley could deliver the killer.

Making contact with Glock’s delivery, O’Malley looked like he could do it. Then, the ball fell shallow, bouncing feebly to Max Costes’ glove Then, Costes ran to first to deliver the final out for the Terps as he placed his foot on the base.

Overcoming a powerful stalemate enforced by VCU, Maryland snatched the win from the Rams, 8-6.

Looking to change things up on the mound with a midweek game on deck, Ryan Van Buren made his first collegiate start for the Terps. And early, he made an impression.

Throwing a pair of hitless innings, Van Buren gave Maryland some time to pull ahead early.

“Van Buren started awesome,” coach Rob Vaughn said. “He hasn’t been extended, most of his outings have been pitch here, pitch there. I thought he learned something tonight.”

The Terps did just that.

Watching a fastball hang over the plate, Chris Alleyne rotated his hips down toward the ball, making contact as it easily flew skyward. Flipping his bat with his right hand and leaving it suspended for a moment, Alleyne didn’t cross first before the ball crossed the wall.

In what would be a common theme for both squads, Nick Lorusso joined in as he blasted a homer to make it 2-0 for Maryland early.

Van Buren fell victim as both teams channeled their energy at the plate.

Starting off with a two-out RBI single, VCU pulled closer before yet another shot flew over the wall, this time for the Rams. Tyler Locklear’s two-RBI shot snatched the lead away from Maryland as both teams played evenly.

“We went 8-0 through the beginning of the year, we played with the lead the whole time,” Vaughn said. “We all know [that] long-term we have to be good at coming from behind and we did a nice job.”

Gracing the other side of the plate, Alleyne cracked another shot to center, this one much less certain than the first. But the ambidextrous Alleyne continued his home run trot as a Rams outfielder reached up in vain for the slugged ball.

“I feel pretty good,” Alleyne said. “My strength is feeling good from both sides of the plate, kinda started off the season a little tough but it’s good to get back on track here.”

Alleyne’s response pulled the Terps to a stalemate, but the wind couldn’t stop carrying baseballs. The Rams struck back with an opening pitch homer off of Andrew Johnson as he struggled heavily with control in the fourth.

One more run crossed for VCU before Johnson settled down to end the inning and stranded a pair of runners for the Rams.

Bobby Zmarzlak blasted a homer to left-center in the fourth and Luke Shliger grabbed a groundout RBI to fight back even with the Rams again. VCU pulled ahead again in the fifth frame before a pivotal hit for Maryland in the sixth.

It was Shliger who once again came up big down the stretch.

Clubbing a fly-ball to left that found just the right spot on the left-field line to land, Shliger batted home a pair of runners for Maryland’s first concrete lead of the game. And followed by a 1-2-3 inning from Sean Heine after he relieved Matt Orlando, the Terps were in business.

“Luke has been on the barrell so much and not being rewarded for it so he deserved that duck double in the corner to score two and we’ll take that one,” Vaughn said.

One last run created controversy as VCU tagged a runner at second for the final out during the hit’s aftermath, and Vaughn protested.

“The ball ends up on the ground,” Vaughn said. “They told me it was a transfer, which is weird because there was no other play happening. It was more the explanation [that] fired me up.”

Glock’s later heroics sealed it for Maryland and delivered the Terps their tenth win of the season.

“When it’s late in the game, runners on base, definitely the adrenaline’s pumping,” Glock said. “But it’s a good time.”