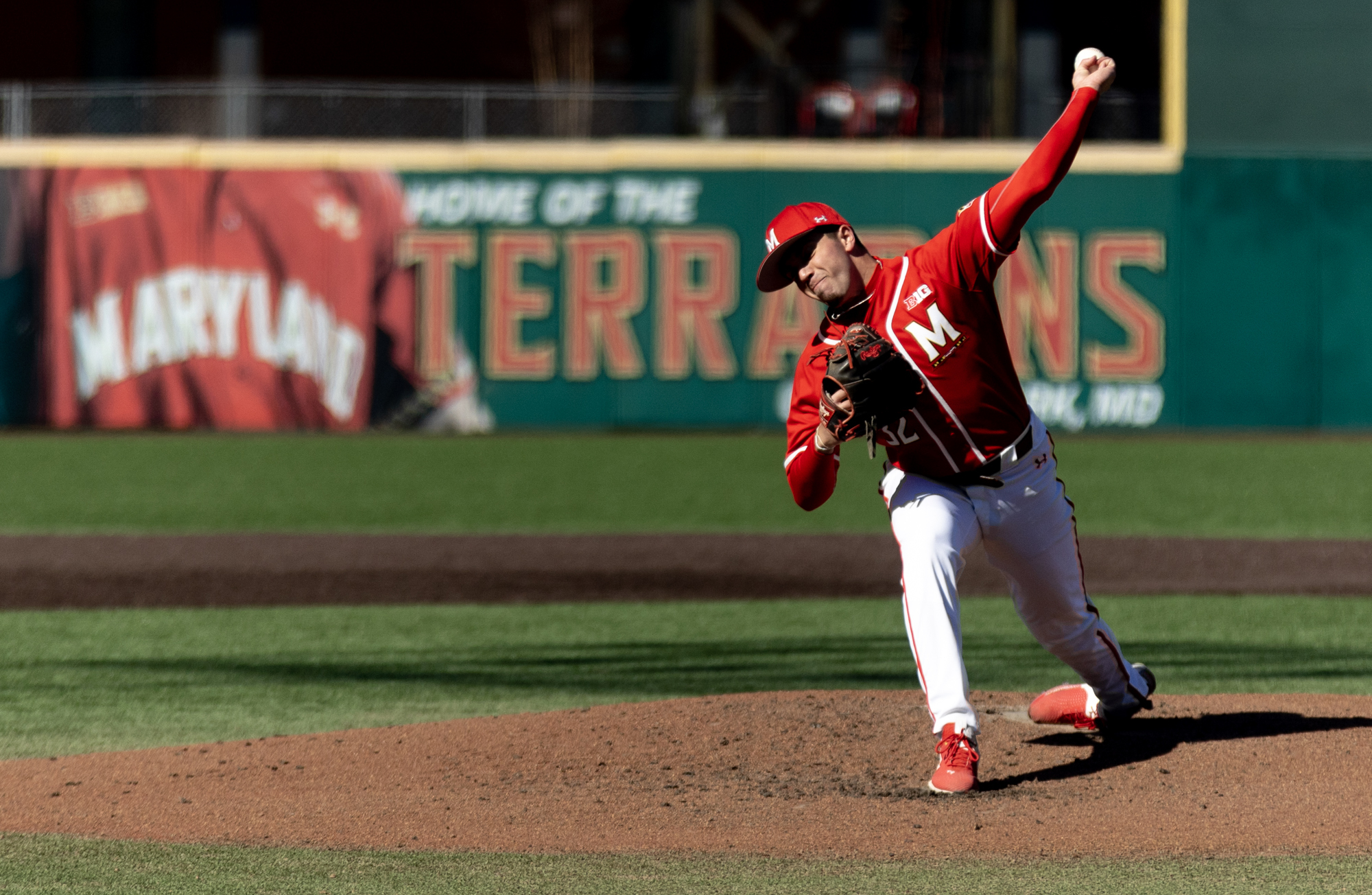 Nothing shook the junior pitcher.

Throwing strikes and keeping batters behind the count, Ryan Ramsey never kept Cornell’s batters at the plate long. Struggling for every inch, the Big Red opened the way for Maryland at the dish.

And they pulled away.

“Ramsey was outstanding, Orlando was good and that’s about it,” coach Rob Vaughn said. “We got a lot of free stuff in that eight-run inning… it’s great when you don’t play good and you win but we measure ourselves against the best version of who we can be.”

With the Big Red fresh off a heartbreaking extra-innings loss to Georgetown, Ramsey and the Terps did nothing but reinforce their sorrow early.

Utilizing a steady but fast pitching rhythm, Ramsey struck out 13 batters on the day, and five out of Cornell’s first nine batters. The frigid weather did nothing to help the Big Red at the plate.

“[Ramsey] can really spin the fastball and gets a lot of swing-and-misses on him,” Vaughn said. “The big game-changer this year for him is that his change-ups have been really, really good … he just attacked the strike zone.”

But Maryland did just fine swinging the bat.

“We did what we were supposed to do and put up a crooked number,” Costes said. “Our bullpen came into it and the dude does not give up the lead and we’re walking out of here with another [win].”

Starting off with a thunderous two-RBI homer from Max Costes, the Terps laid down the law in the batter’s box — the temperature didn’t hinder Maryland’s offensive capabilities.

The fourth inning made that apparent.

Assisted by numerous walks in the inning and a decisive double-steal executed by Troy Screhffler and Bobby Zmarzlak, the onslaught began. Jacob Orr kicked off the scoring with an RBI single, and then the next four batters walked or took a base after being hit by pitch.

After a poor defensive showing, it was 6-0, Maryland. Cornell’s starting pitcher Spencer Edwards took his leave in favor of Chris Ellison, but it was much too late. The hitting flood began.

Maryland supplied four more RBIs via a Nick Lorusso fielder’s choice RBI, a Costes two-RBI double and a single from Zmasrzlak hit Costes home. The torrent buried the Big Red in just the bottom of the fourth inning.

“That inning was like a smorgasbord of how well our offense works,” Costes said.

Matt Shaw added an additional run off an RBI single in the fifth to push the Terps’ lead to 11 to cap off their early scoring.

It wasn’t the Big Red’s day. Freshman Michael Walsh took over for Ramsey in the seventh inning and he looked to close the game for Maryland.

“They were probably one of the weaker teams we were looking at,” Ramsey said. “My biggest thing today is making sure that I’m getting ahead of guys, the only way they’re gonna score is on freebies like walk scenario stuff.”

Walsh did admirably enough in the seventh frame but showed heavy cracks in the eighth as Cornell slapped a grand slam to left to make the game more interesting in the late innings.

But the Terps’ lead was insurmountable. Matt Orlando took over on the mound and ended it. Zmarzlak added one last run off an error to cap off the day at 12 runs for the Terps.

Maryland put on a dominant performance as it captured its 12th win of the season on a 12-score outing.

“I think you can look at it, 12-2 record and think you’re pretty good but that doesn’t mean anything,” Vaughn said. “We’re so far from where we want to be as a group. We’re so far from the end of the season so I think it’s a little bit of a reset.”