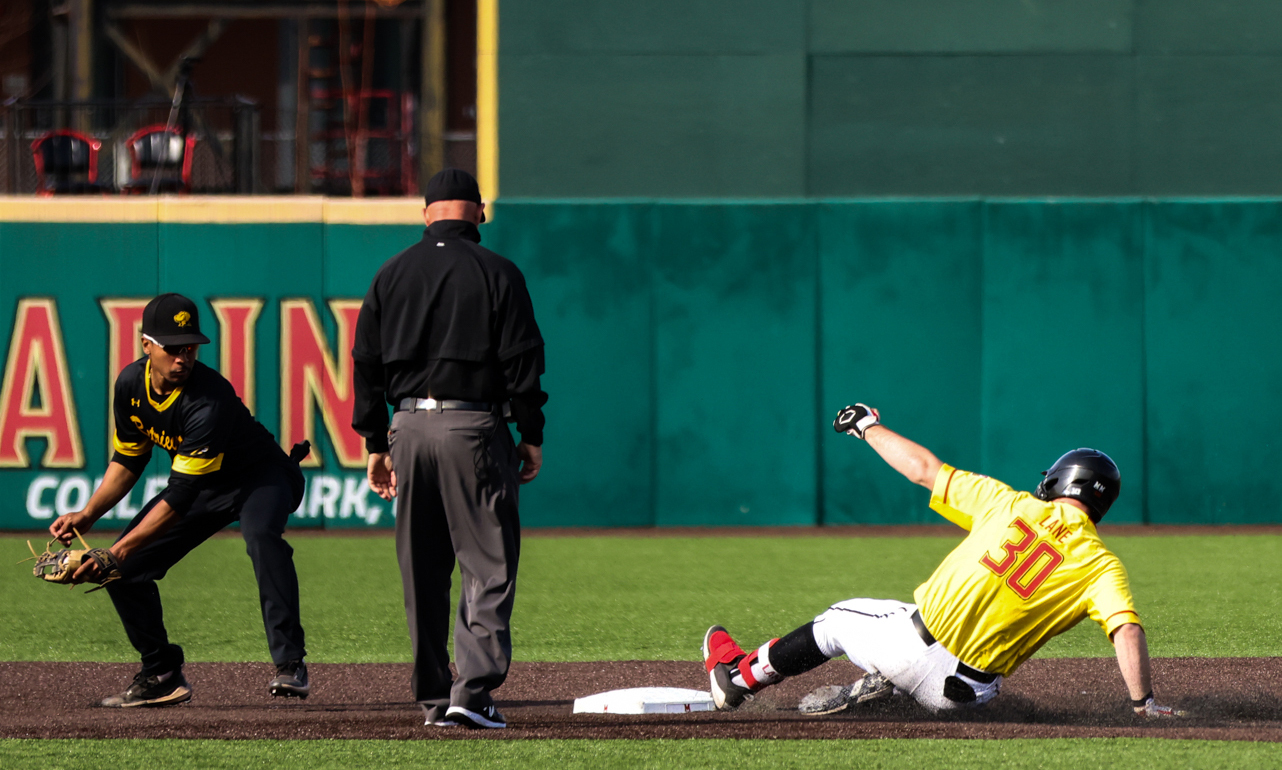 Maryland baseball experienced some southern heartbreak in its weekend series loss to Dallas Baptist — a crucial set of games for the Terps’ hopes of hosting an NCAA regional. Even more so considering they have one of the weaker schedules of any ranked team in the nation.

D1Baseball.com didn’t quite agree, dropping the Terps out of their rankings for their folly. But one could argue this series was their most important since their series win against UCLA in 2015 to advance to a super-regional.

“Certainly no shame in going on the road and losing two of three to a top 25 caliber club like DBU,” D1Baseball writer Aaron Fitt said.  “Love the way Maryland scheduled – road trips at Baylor, Campbell and DBU … That’s a grown man schedule, and the Terps have handled it very well.”

Albeit, that 2015 roster featured several professional players — Brandon Lowe, LaMonte Wade and Kevin Smith to name a few. A few other notable series opponents: LSU in 2017, East Carolina in 2018 and 2019 and Coastal Carolina in 2020 — all sweeps of Maryland baseball.

[No. 22 Maryland baseball downed by Dallas Baptist for series loss, 5-2]

Dallas Baptist, like all the other teams above, seemed hardly a pushover. The Patriots maintain a No. 1 rank in RPI, were one win away from the College World Series last season and have racked up 40 or more wins in every season — excluding the shortened 2020 campaign — since 2014.

“You’re trying to build a good RPI [scheduling DBU],” coach Rob Vaughn said. “We want to do things that have never been done here before. We want to host regionals. We want do that stuff [at] Maryland.”

But unlike all the aforementioned regular season series, Maryland gave the Patriots a run for their money. After being irrefutably humbled in their opening game, the Terps bounced back with the 11-5 victory and rode with the Patriots most of the way through the decider.

[Bats come alive for No. 22 Maryland baseball in commanding 11-5 win over Dallas Baptist]

“We’ll just keep progressing forward,” infielder Matt Shaw said. “We’re only 23 games in and I think we’re in good shape to get better and become really good down the stretch.”

That would be reminiscent of last season where the Terps rode with a losing record a fair amount of the way down their schedule before flipping their season en-route to the Greenville Regional Final. There’s no reason to think Maryland wouldn’t be able to host if its able to dominate its conference schedule.

With a perfect record at home during the regular season so far, hosting provides a major advantage Vaughn’s club hasn’t had in his tenure. Competing with Dallas Baptist, while minor at the moment, can provide an important puzzle piece to a potential host resume.

And unlike all those years past, the Terps showed their mettle in preventing a sweep at the hands of a marquee opponent. Down the stretch, the college baseball scene will spy at Maryland to see if this season will be a unique one — so far, it has.