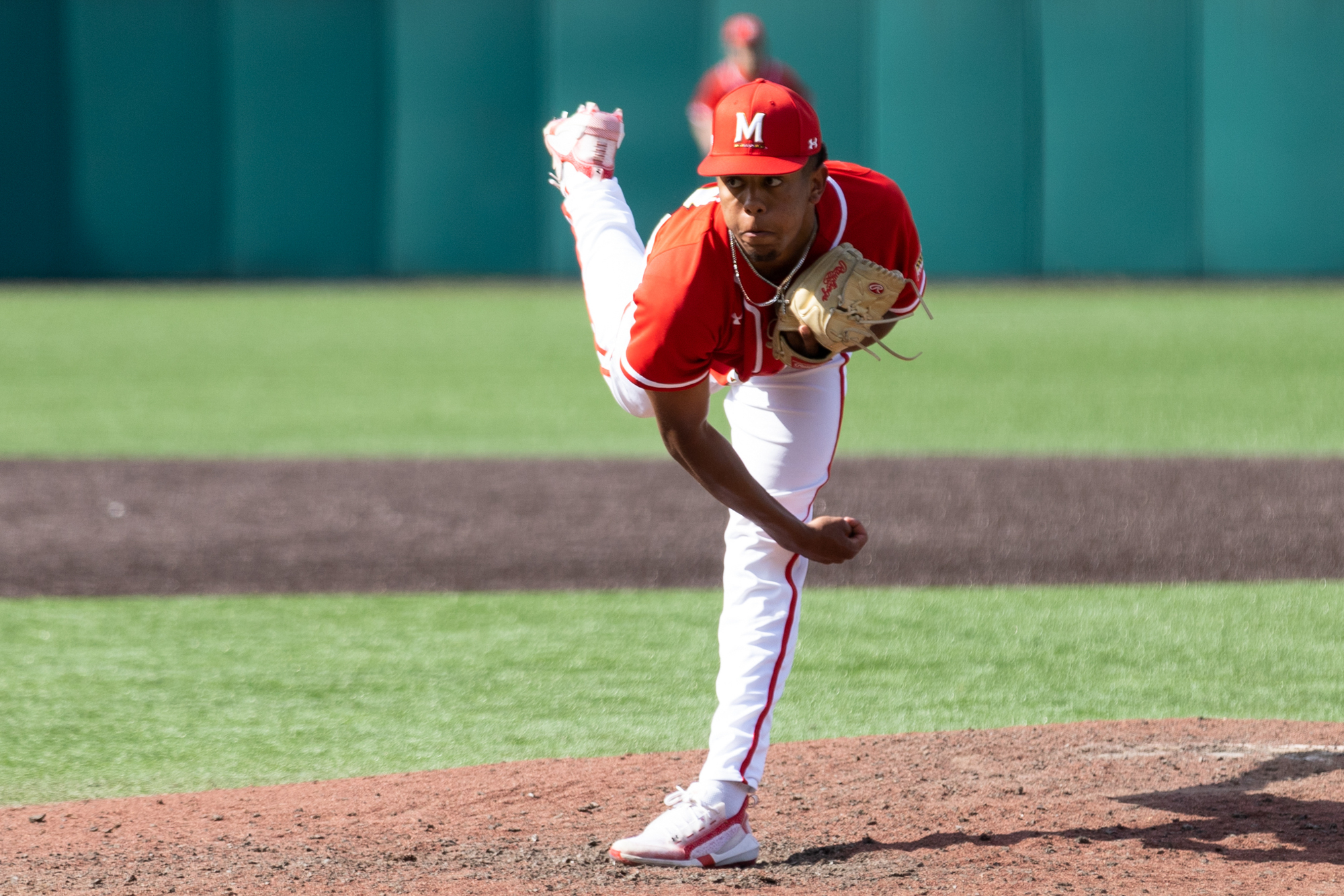 When he can locate it, it’s effective. At other times, it runs wild in short stints and creates walks and hit-by-pitches in disastrous fashion.

When Maryland baseball coach Rob Vaughn called on him in a close contest against Ohio State, Belgrave thrived and found himself one strike away from closing out a Maryland victory.

The redshirt freshman loaded up, gathering whatever velocity he could muster to bury the Buckeyes. The pitch flew, the batter swung and missed, and Belgrave earned his first career win.

His steady closing hand sealed a back-and-forth victory for Maryland. The Terps beat Ohio State, 6-5, for their third straight win and clinched a series victory before Sunday’s rubber match.

“That was a four seam,” Belgrave said. “He swung over it… that’s the goal.”

“[Nigel was] unbelievably outstanding,” Vaughn said. “You emptied the tank yesterday…for Nigel to be able to give us 2 ⅓… at the end there and not flinch…was huge.”

But before the underclassmen pitcher could close out the contest, two Terps elevated Vaughn’s squad from the brink of defeat.

Luke Shliger and Nick Lorusso both smashed a seventh-inning solo homer. Shliger’s turned a 5-4 deficit into a tie and two batters later, Lorusso pulled a shot into left field to give Maryland a lead they would not relinquish.

The Terps needed those runs to keep pace with a pesky Buckeyes offense.

The junior pitcher allowed a pair of singles to open the game before the Buckeyes efficiently moved them over with a sacrifice bunt down the first-base line. The small-ball approach landed Ohio State its first run off an RBI ground-out but allowed Ramsey to limit the damage to just one run.

Then the Buckeyes’ Isaiah Coupet stepped onto the reddish-brown mound and began unloading his arsenal of breaking pitches — including a swooping 12-to-6 curveball. He fooled the Terps batters and held Maryland hitless through the first four innings.

“You don’t see a guy [throw] from a low slot, is left-handed, and throws [a] big breaking ball, and we knew exactly what he was gonna try to do to us,” Vaughn said. “But knowing what he’s gonna do and being able to do something with that is two different things.”

Ramsey settled for two innings after the tumultuous first but quickly crumbled in the fourth. The Buckeyes’ continued to pick him apart as three hits, a sacrifice bunt, and an error let them grab two more runs.

Nick Robinson replaced Ramsey with one out in the fifth inning and finished the frame cleanly.

That set the stage for last night’s hero, Bobby Zmarzlak, in the bottom of the inning.

A day after his walk-off home run, the left fielder cut the Buckeyes’ three-run advantage to one by smashing a horizontal breaking ball well over the left-field wall. It was his second multi-RBI homer in as many days.

That two-run shot started a four-run fifth inning. Maryland boarded a pair of runners off a Kevin Keister walk and a Luke Shliger single. A Chris Alleyne single and Nick Lorusso sacrifice bunt brought both home and gave the Terps their first lead.

Just like that, Maryland turned four innings of Buckeye work into nothing more than a footnote.

Ohio State struck back in the seventh inning. First baseman Zach Dezenzo cranked a center-cut pitch that carried easily over the left-field wall to boost the Buckeyes ahead yet again.

The volatile match wasn’t done lighting up the box score. But after Maryland throttled back in front with solo home runs by Shliger and Lorusso, Belgrave shut the door to clinch the series victory.

“We like playing from behind,” Schreffler said. “We like that little chip on our shoulder [and] we had to come back here and start barreling some baseballs, scoring some runs. For us to be down 3-0 and come back, take the lead was big for us going into tomorrow.”