Maryland softball rallies late but loses in extra innings to No. 21 Michigan, 5-3 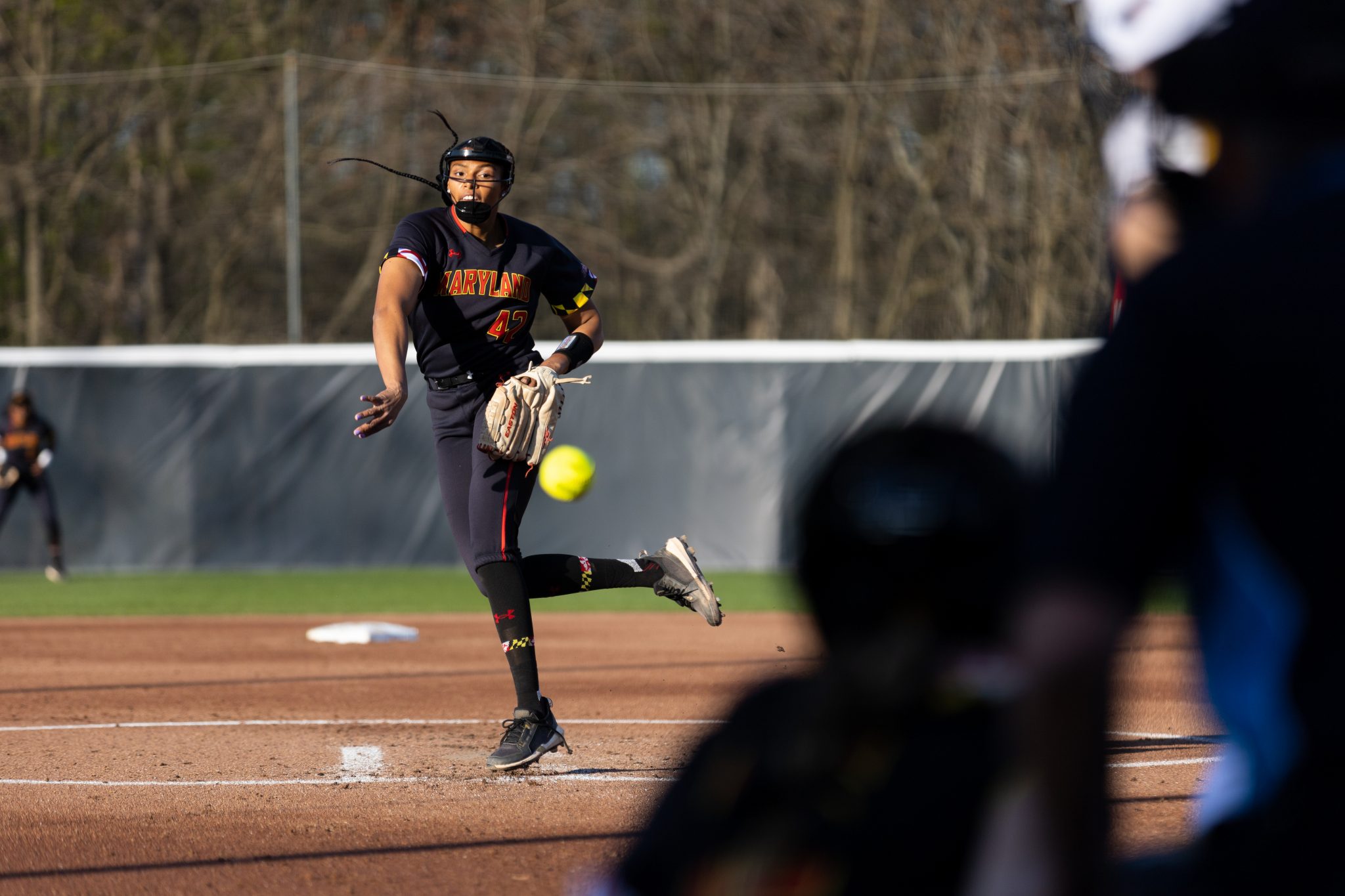 It was a mirror image — for the second time of the night, Michigan’s Melina Livingston knocked a ball over Jaeda McFarland’s outstretched arm in center field. The Wolverines’ second baseman advanced to third on a groundout and surged home on a sacrifice bunt, sliding headfirst for a run that put Michigan ahead in extra innings.

After some added insurance and a blank bottom frame, Terps lost the second game of its three-game series against the No. 21 Wolverines, 5-3, in eight innings. Maryland’s defeat came despite a late rally propelled by a keen substitution.

Freshman Amelia Lech didn’t feel like the obvious choice to pinch hit for Maryland softball in the bottom of the sixth.

The Terps faced a two-run deficit but had the bases loaded with two outs. Lech had a mere two hits in 28 at-bats, a .071 batting average, prior to substituting in for Campbell Kline. She worked a full count and hit the ball on a line for a single on the seventh pitch of the at-bat.

Taylor Okada scored with ease, but as the throw seared through the air to the plate, it looked like it had Michaela Jones beat.

It did — but Jones pulled out a last-resort swim move, avoiding the tag and scoring the tying run.

Lech had been sidelined for several series after her cold start, but coach Mark Montgomery felt it was the right matchup for her to jump out of her slump.

Montgomery said that Michigan southpaw Meghan Beaubien’s rise and curve are not to be taken lightly. Lech is someone he said he trusts against risers, and being a righty, he felt she could battle off the curve. He was right.

And aside from a favorable matchup against the All-Big Ten first-teamer, Lech may have had some added motivation.

“My dream school was Michigan, I’ll say it straight up. I wanted to go to Michigan so bad when I was younger, but facing them tonight, I was like, I’m giving my all out,” Lech said. “And when I got into the box, I took a deep breath. I was like, ‘it’s time to hit, like nothing else, go hit the ball.’ ”

Maryland’s bats didn’t wake up until late in the game. Before their sixth-inning rally, the Terps didn’t have any two-out hits.

Terps’ pitcher Courtney Wyche had a strong outing going in the fifth inning, but the Wolverines had a two-out rally of their own.

Wyche got two quick groundouts and forced another weak groundball from Audrey LeClair — a roller less than 30 feet down the first baseline. But unlike the last two, this slow dribbler bounced into uncharted territory and let the Wolverine rightfielder reach first base.

A walk put runners on first and second, turning a harmless two-out bases-empty scenario into a Michigan scoring chance.

That’s where Livingston hit her first double that put Michigan up 3-1.

[With Michigan series ahead, Maryland softball is getting comfortable in the batter’s box]

Heading into the game, Wyche hadn’t allowed a run in her last 11 ⅔ innings. She forced a litany of swings and misses, striking out 17 batters in that span.

She also found herself in several jams in that time, allowed nine walks and six hits. Navigating situations with runners on base has become almost routine for Wyche, who came into Friday’s game with an ERA of just 2.37 despite allowing 1.53 hits and walks per inning pitched.

Wyche settled down after the two-run fifth inning, retiring seven of eight batters in two scoreless frames. Her solid outing allowed Maryland’s bats, which were largely silent, the chance they needed to tie the game.

But she and the rest of the Terps couldn’t maintain that momentum into the eighth inning and pull off their second straight upset.

Wyche finished the game and threw all eight innings. She allowed five runs on nine hits and a walk while striking out seven. Although she was unable to come out as the winning pitcher, Wyche looked sharp, and Montgomery was happy with her 144-pitch night.

“[Wyche] pitched great tonight. I mean, I thought her process was fantastic. I thought she held a very good hitting team [to a competitive game],” Montgomery said. “I think we had a couple of unlucky things happen at the end… but that’s part of the game.”

If Maryland can come away with a win in Saturday’s rubber match, it’ll mark a program-record fourth straight series win.

CORRECTION: A previous version of this story and its headline misstated Michigan’s ranking as No. 24. The Wolverines are No. 21. This story has been updated.