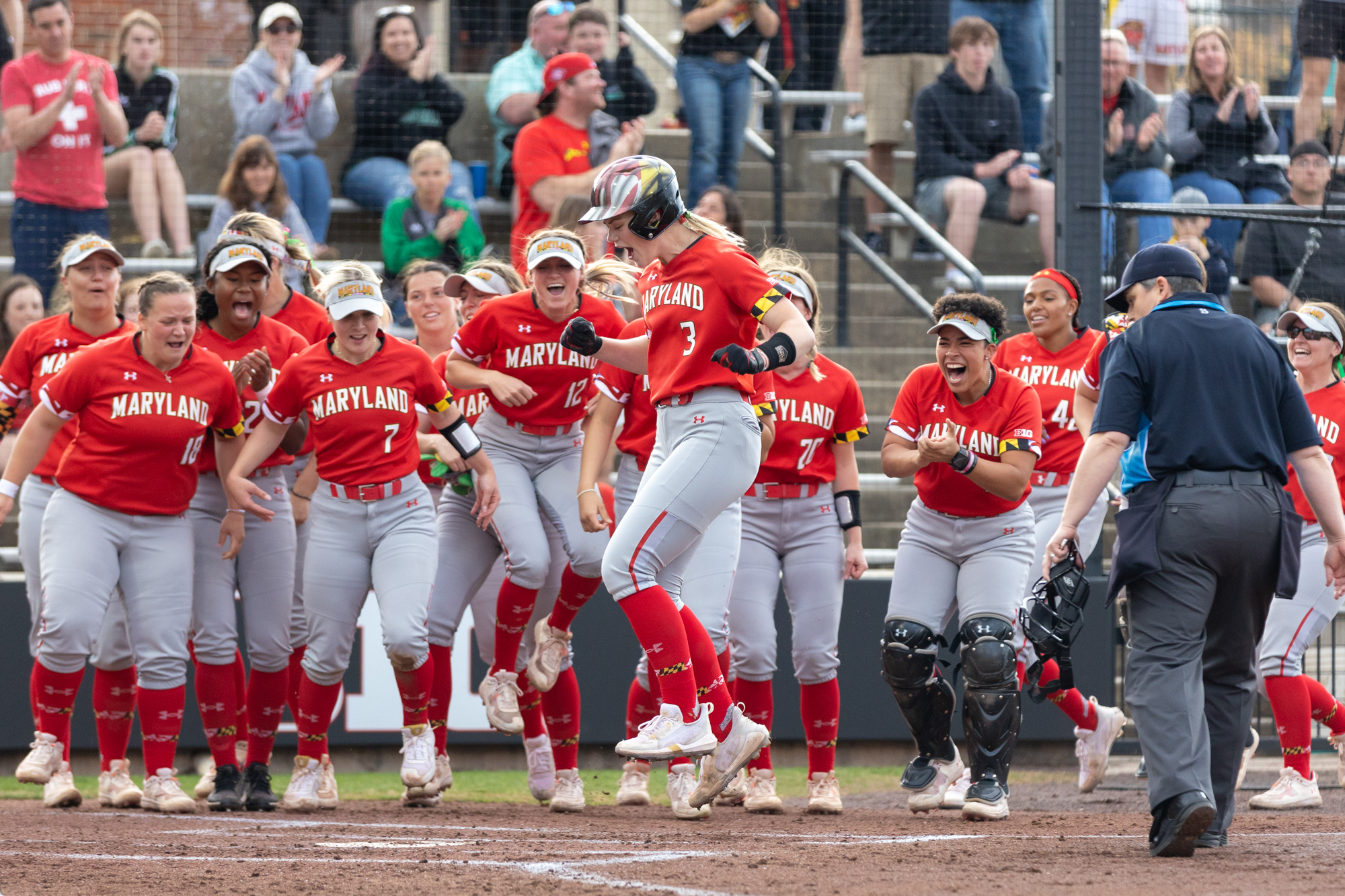 Trinity Schlotterbeck celebrates while heading to home base during Maryland softball's 5-1 win over Michigan on April 14, 2022. (Cam Andrews/The Diamondback)

After Maryland softball took the first lead of the game in the opening inning, Michigan responded with a run in the third frame to cut its deficit to 2-1.

Neither side scored in the fourth, but then the Terps’ bats gave Trinity Schlotterbeck insurance runs in the fifth, all coming with two outs in the inning.

Singles from Megan Mikami, Jaeda McFarland, and Mackense Greico each brought home a run against Wolverine’s starting pitcher Alex Storako, one of the best in the Big Ten.

Maryland’s three runs in the frame grew its lead to four and the Terps cruised through the final two innings to down No. 21 Michigan in game one of the series, 5-1.

“It [came] down to trusting the process, coach and our preparation this week,” Greico said. “[We’ve] all been focused on what we knew we were going to see and face, and being able to beat it.”

Maryland started Schlotterbeck in the circle, while Michigan started its ace Alex Storako.

Storako has been the workhouse for the Wolverines this season — and for good reason. She entered with a 1.54 ERA in over 127 innings of work, having struck out 217 batters in the process.

[With Michigan series ahead, Maryland softball is getting comfortable in the batter’s box]

The Terps got to Storako in the first, thanks to the bat of Schlotterbeck.

Schlotterbeck gave herself run support at the dish with two outs in the frame. With Mikami on third, Schlotterbeck crushed a 3-1 pitch that was grooved over the heart of the plate into left center.

Kristina Burkhardt leaped by the Maryland flag on the outfield wall but couldn’t bring the ball back as Schlotterbeck’s home run gave the Terps a 2-0 lead.

“[The home run] really helped me, it put me in a better place mentally,” Schlotterbeck said. “I knew that we were up and I could just just help my team from there.”

Michigan joined Maryland on the scoreboard in the third.

After retiring the first two batters of the inning on just eight pitches, Schlotterbeck struggled to get the final out. Hannah Carson doubled and Taylor Bump drove home Carson on a line drive single into left, cutting the Wolverines’ deficit down to one.

In the top of the fifth, Michaela Jones led off the inning with a double off the wall in right. Regan Kerr entered as a pinch runner for Jones, and advanced to third on a sac-bunt by Ruby Butler.

With two outs, Mikami stole second. McFarland hit a grounder stopped on a dive by Melina Livingston at second, but Mikami came around to score as she slid in just ahead of the throw home by Livingston.

McFarland stole second and scored on a shot into the outfield off the bat of Greico, prompting a pitching change for Michigan. Storako didn’t have her best stuff in game one, allowing five runs in just 4 ⅔ innings.

Annabelle Widra struck out Schlotterbeck to end the fifth, but not before Maryland’s three runs in the frame extended its lead to four.

Schlotterbeck finished off the final two innings without allowing a run, going the distance in the Terps’ 5-1 upset victory over the Wolverines.

“We’ve got fight in us,” coach Mark Montgomery said. “It’s a team that wanted this game … that’s never been used to fighting through pressure and adversity, and finding a way to come out on top, and they’re starting to do that.”