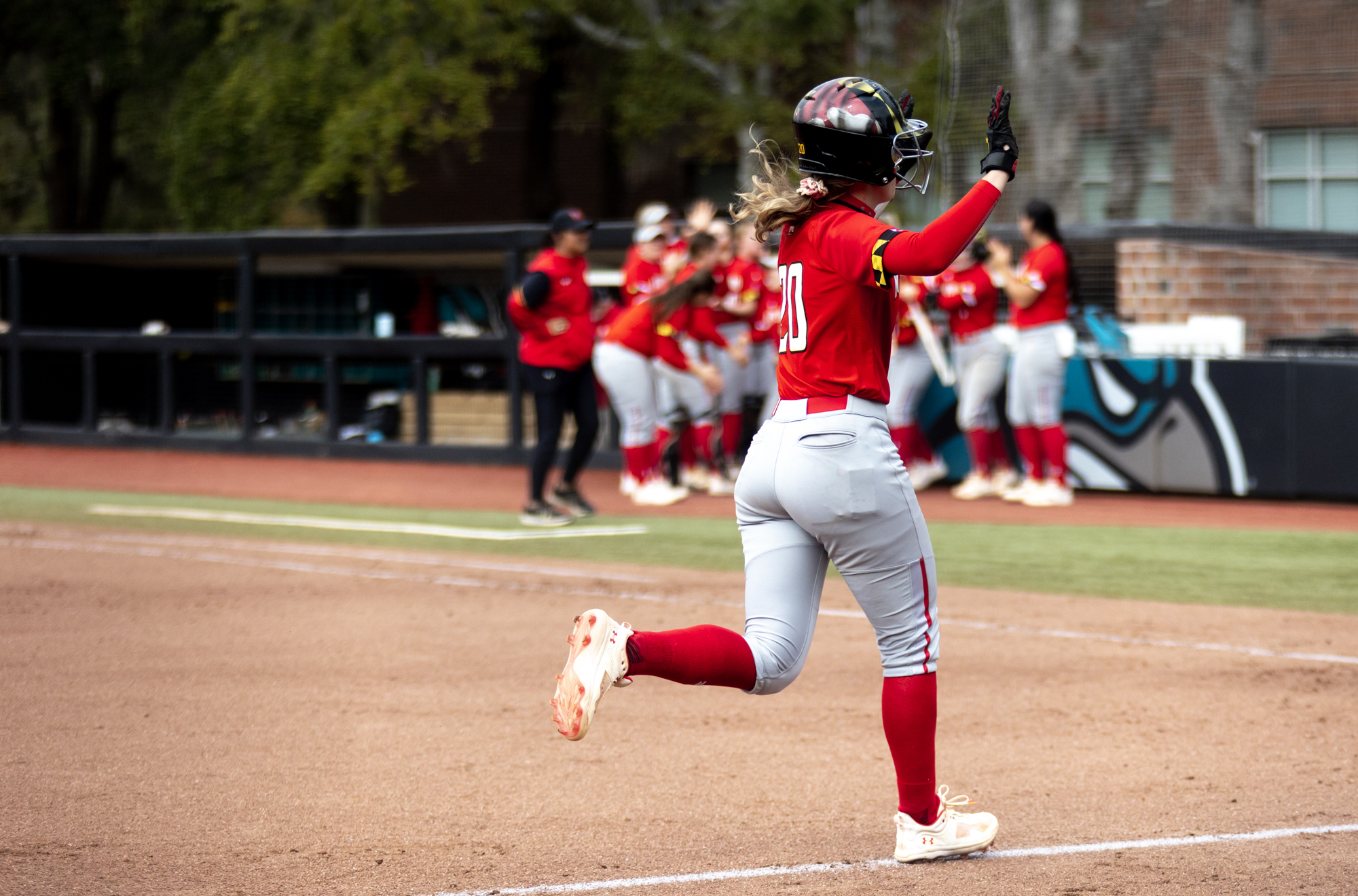 When Michaela Jones dug into the box in the first inning of game two of Maryland softball’s doubleheader at Purdue, the Terps had already posted the same number of runs as they did in their opening game of the day.

With only one out recorded in the game, Maryland pressured the Boilermakers to put in a relief pitcher. It proved costly.

On a 1-2 count with the bases loaded, Jones went fishing at a pitch low in the zone and connected.

Hitting it on a rope over the left-field wall, the sophomore third baseman smacked her team-best fifth home run of the season and gave the Terps a 6-0 lead. As she rounded third base and trotted towards home, Jones was met with a flurry of teammates celebrating — something they weren’t able to do much of in game one of their doubleheader.

A large part of that effort was Jones, who finished 1-for-3 with six RBIs. The two aside from the grand slam were from an opposite field flare that Purdue’s right fielder couldn’t snag on the dive, which was ruled as an error.

Megan Mikami added a strong day on the offensive side, going 2-for-5 across both games with two walks and three stolen bases.

While the awakening of their bats set the tone in the top of the first inning, Courtney Wyche’s performance in the circle — led by a heavy heater of a fastball — added fuel to the fire.

Wyche worked out of several jams, both by causing swings and misses as well as strong defense from her infield.

Wyche faced consecutive innings with multiple runners in scoring position. But she found the perfect opportunities to mix in off-speed pitches, catching several Boilermaker hitters flailing way out in front.

And when she needed her defense most, they stepped up.

With a runner on first in the fourth inning, Taylor Okada fielded a softly hit grounder. She didn’t have enough time to flip it for the force out at second, but reached to tag the runner and quickly got the ball out of her glove and whipped it to first baseman Mackense Greico to turn two outs.

Greico had an impressive play of her own. After a faintly hit ground ball that hovered right in front of home plate was fielded by Maryland catcher and former Purdue standout Kiley Goff, the ball was tossed to Greico.

Unable to get to first base quick enough, Greico caught a glimpse of a runner trying to steal home.  On the run, Greico gunned the ball home and Goff, who left the plate to field the ball, got back in time for the tag.

That combo gave Wyche credit as the winning pitcher in her five-inning shutout performance with six strikeouts.

Managing a victory on the day, the series-deciding game will take place Sunday at noon where the Terps can win their third consecutive conference series.