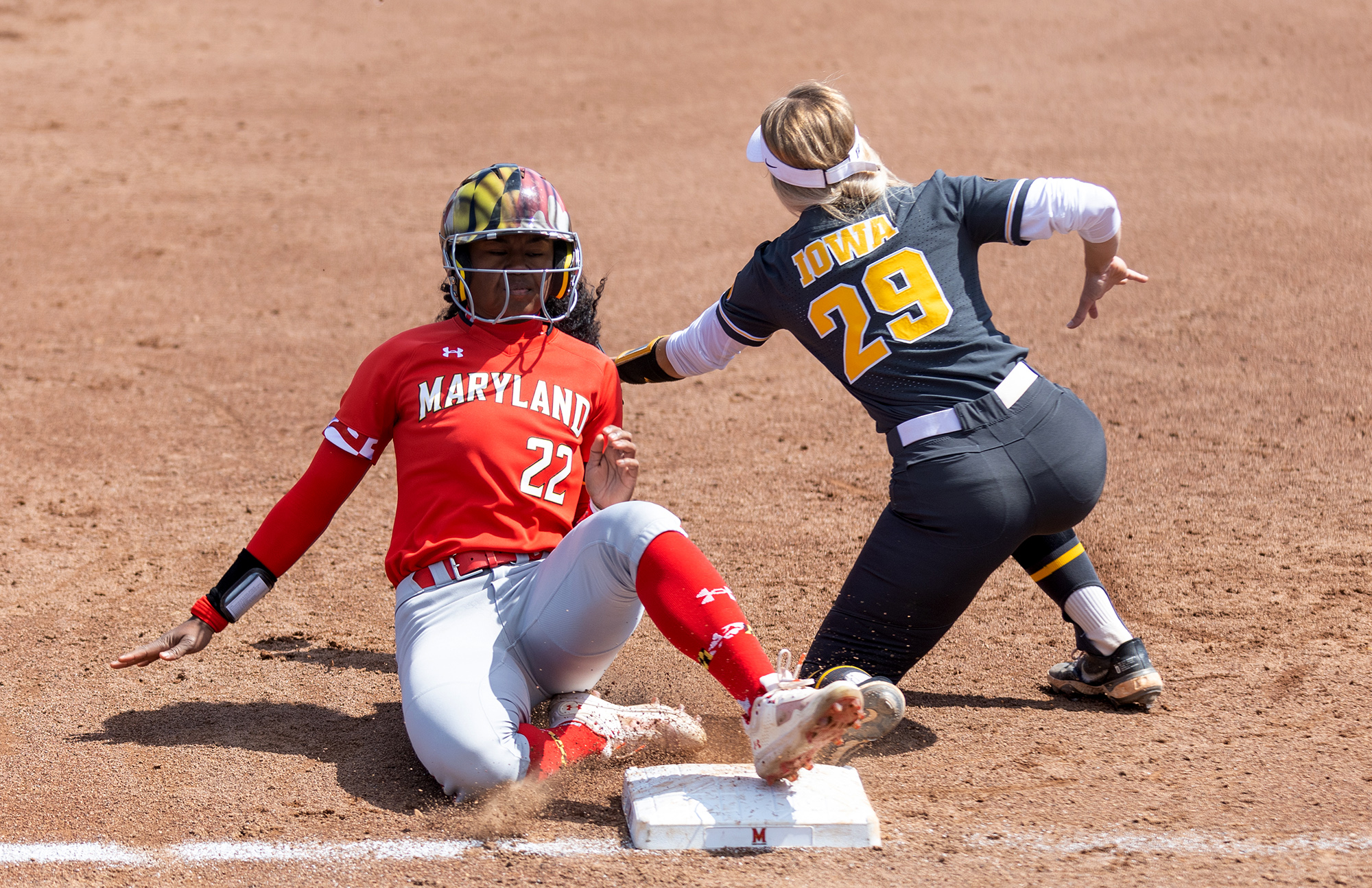 Jaeda McFarland slides into third base during Maryland softball's 6-2 win over the Hawkeyes on April 3, 2022. (Riley Sims/The Diamondback)

When Mark Montgomery took the reins as Maryland softball’s head coach after the 2019 season, he envisioned a “five year plan” for the future of the program.

Now in year three, Montgomery has guided the Terps to a 5-1 start in conference play — their best since 2018.

Following a three-game sweep of Iowa, Maryland is back over .500 at 18-15, and clutch hitting has been key for its turnaround. The Terps have focused on the process in each and every at-bat, which has allowed them to string together rallies and step up in key moments.

“We’ve had to go with the process mentality and I think that’s what happens when you have two outs. We’re sticking with our process and just not giving up, pushing through those moments,” said Trinity Schlotterbeck.

Against the Hawkeyes, 11 of the Terps’ 24 runs came with two outs. Those runs haven’t just added on to large leads — they’ve come at crucial moments.

Montgomery’s squad strung together three runs in the second inning of game two to put the game out of hand for the Hawkeyes. Haley Ellefson’s game-winning RBI double came with two outs.

In the second inning of the series finale, Jaeda McFarland broke the game open with a two-out, two-run double to put the Terps ahead by three and Iowa never recovered.

Not only has Maryland been clutch at-bat, but the Terps have been effective in key situations in the field as well.

In their third game of the series against the Hawkeyes, Kiley Goff made a couple of big throws from behind the dish to catch Iowa trying to steal.

With the game tied 1-1, Goff gunned down Haley Downe to end the second inning and again in the fourth. Goff ended Iowa’s one-out rally.

Tristin Doster crushed a solo home run and was followed with a single, putting pressure on Schlotterbeck in the circle to hold onto Maryland’s slim two-run lead. Goff thwarted the Iowa threat with a caught stealing of Rylie Moss, and Schlotterbeck struck out Emma Henderson to get out of the jam and end the inning.

“I love being behind the plate. I love supporting my pitchers and throwing people out at second as well. I trust my shortstop, I trust my second base[man], I trust everybody on the field when I’m throwing the ball to them,” said Goff.

McFarland — last year’s Big Ten Freshman of the Year — was hitting just .270 without a home run before the series against the Hawkeyes. But against Iowa, McFarland broke out and raised her batting average by around 30 points as she went 6-12 with a home run, four RBIs and five runs scored.

McFarland missed time in concussion protocol, but now fully healthy, she’s showing signs of the talent she possesses on the diamond.

“She’s such a tremendous player and she’s back to being healthy … having her back [is] huge,” Montgomery said.

When the Terps started 5-1 in conference play in 2018, they weren’t able to maintain the level of success they showcased in their first two series. They got swept in each of their next two series and finished conference play 2-15.

For Maryland to maintain its level of success for the rest of this season, all the Terps need to do is keep everything simple.

“We put a little too much pressure on ourselves early … and there were games we felt we should have won, but then we would let the pressure mount and we didn’t do as well,” Montgomery said. “When we keep it simple like [we have been], then you’re seeing this team really start to come together and … hit their stride.”