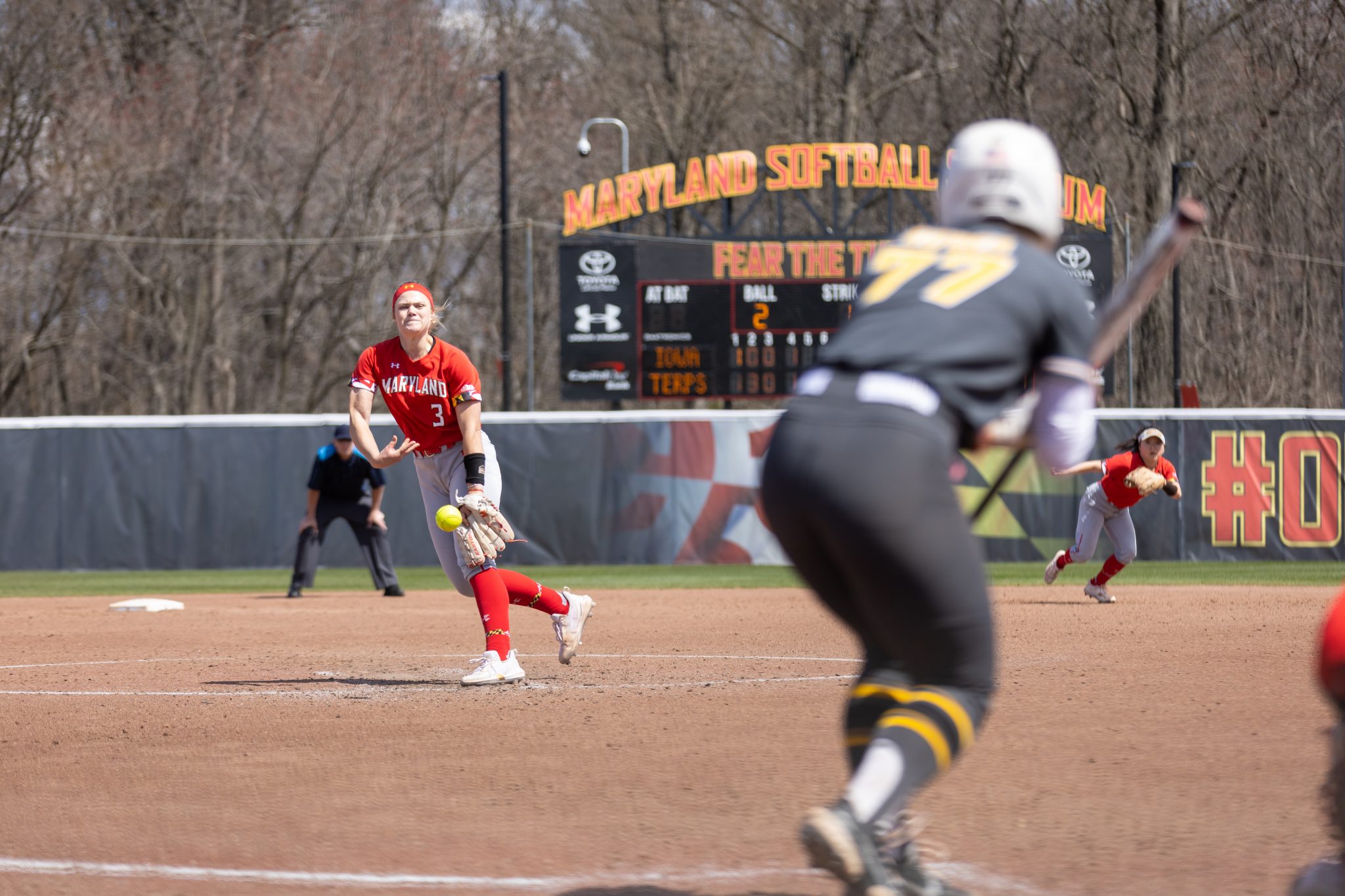 Up by three in the bottom of the fifth inning, Maryland softball looked for insurance runs to seal a win over Iowa in the final few frames of the teams’ series. With one out, Trinity Schlotterbeck did just that.

On a 2-2 count, Schlotterbeck dug in at the plate. Schlotterbeck demolished the pitch over the wall to dead center field for a solo home run, extending the Terps’ lead to 6-2.

Schlotterbeck played a big role both in the circle and at the plate in Maryland’s 6-2 victory over Iowa to secure the series sweep.
“We’re really focusing on the process … swing at strikes, don’t swing at balls, keep the game simple and let whatever happens happen, and if we do those good things then good things usually happen. It was a fun weekend,” said coach Mark Montgomery.


Both teams started their game one starters in the series finale — Breanna Vasquez for the Hawkeyes, and Schlotterbeck for the Terps.

Iowa scored off Schlotterbeck in the first frame of the day.

Brylee Klosterman led off the game with a walk and moved over to third with just one out for Tristin Doster. Doster blooped a single in front of Megan Mikami in left, scoring Klosterman for the 1-0 lead.

Haley Ellefson entered the batter’s box with runners on the corners and only one out in the bottom of the first. Ellefson showed a bunt on the first pitch but pulled back and Doster tried to gun Jaeda McFarland getting back to third. Doster’s throw deflected off the glove of Kalena Burns into left, allowing McFarland to cross home, tying the game at one apiece.

Maryland scored three in the second to take its first lead, 4-1.

After Schlotterbeck flied out to start the bottom of the second, two singles and a fielder’s choice loaded the bases for the top of order. Mikami hit deep enough in left field to score Michaela Jones on a sac-fly. McFarland followed with a two-RBI double over the head of Zoe Schulte in left field.

“I think the whole batting lineup, one through nine, [is] solid. I think every single person goes up there with a great approach. We trained during the week for these pitchers and I think we go up there trusting the process and ourselves and we get the job done,” said Kiley Goff.

Vasquez couldn’t finish the second inning in the circle for the Hawkeyes as she was relieved by Devyn Greer. Greer got the final out of the frame to prevent any more damage from the Terps.

With one out in the top of the fourth, Doster crushed a high fastball on a 1-2 count into dead center for a solo home run — McFarland could do was watch it fly over the wall. Doster’s shot trimmed Iowa’s deficit to 4-2.

But the Terps got that run right back in the bottom half of the inning.

With Mikami on second and one out, McFarland knocked a hard chopper that deflected off the glove of Sophia Maras into the outfield. Mikami came around to score to extend the Terps’ lead back up to three, 5-2.

Schlotterbeck helped herself at the dish in the bottom of the fifth. Schlotterbeck sent a Greer pitch a long way, over the wall in center field for a solo home run — her first of the season.

“[The home run] was super exciting, once I hit it off the bat I knew it was going out so it was an amazing feeling. I kind of blacked out in the moment, but it was awesome,” said Schlotterbeck.

Schlotterbeck fired scoreless innings in the sixth and the seventh as she went the distance in the win.