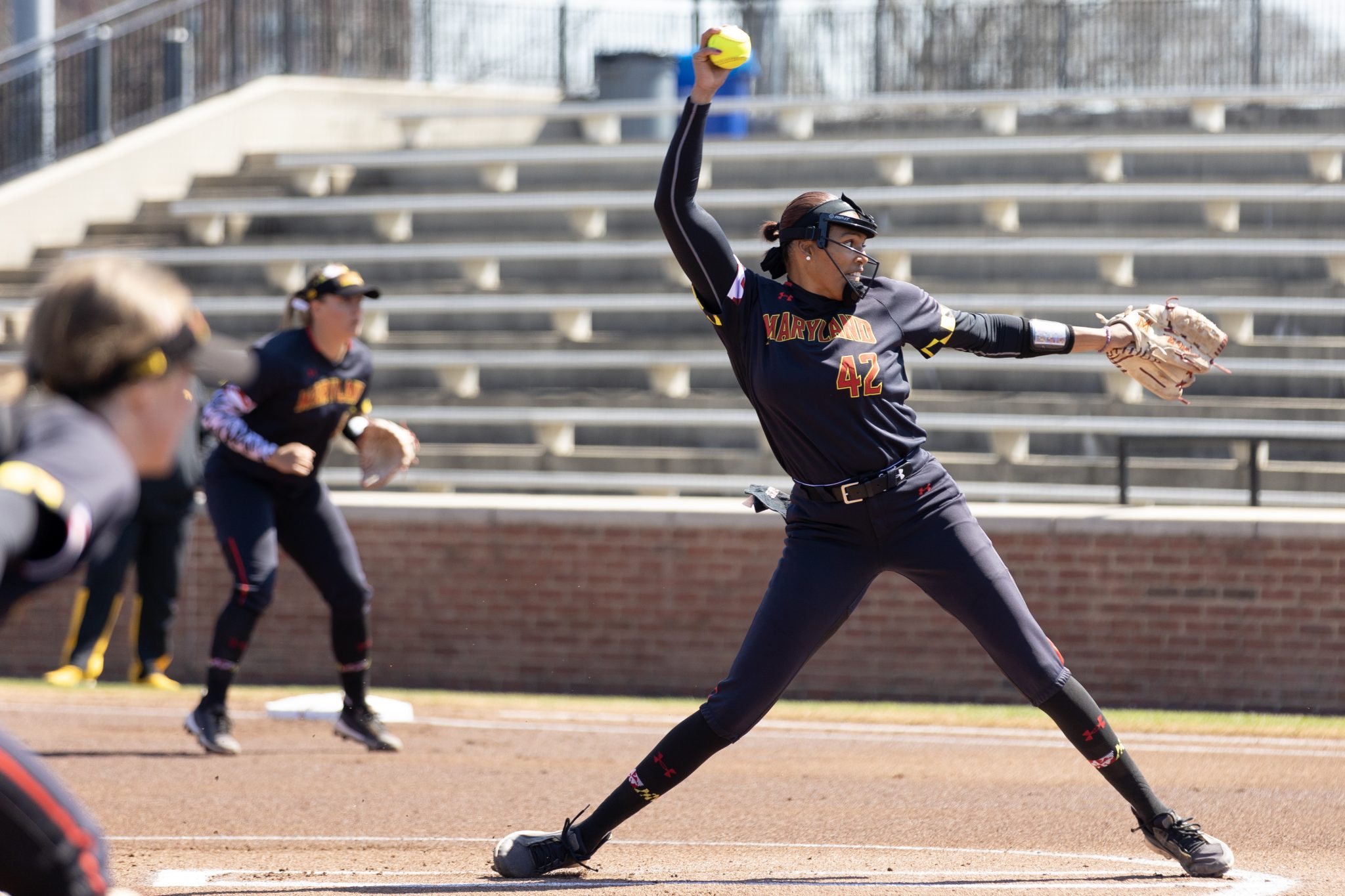 After allowing two runs in the top of the fourth, Maryland softball came to bat looking to extend its 6-2 lead.

Jaeda McFarland stepped into the batter’s box with two outs and no one on and connected on a 1-1 pitch in a big way. McFarland blasted the ball over the wall in right field for a solo home run — her first of the season.

“I thought our offense was on point today, we hit the ball well,” Montgomery said. “For the most part, the girls are continuing to improve and get better.”

Maryland opened the scoring in the bottom of the first.

With the bases loaded, Taylor Okada hit a fly ball to center field that was misplayed by Nia Carter. Carter recovered to throw out Haley Ellefson at second, but Carter’s error in center allowed McFarland to plate the first run of the game.

The Terps’ next batter, Regan Kerr, drove home two runs thanks to another Iowa error. Kerr knocked a grounder underneath the glove of Sammy Diaz at second and Okada and Mackense Greico scored.

“I was definitely looking to attack the first strike I could see. The first strike tends to be the best strike of your at-bat and once you start getting deep into counts, you’re battling, you’re on the defensive side. I wanted to stay on top of that, and see the best pitch I could get and hit it hard,” Kerr said.

Already up, 3-0, Maryland extended its lead to six in the second inning.

Kiley Goff started the scoring on a wild pitch as she slid into the plate just ahead of the tag. McFarland brought Megan Mikami home on an infield single to short and after a Greico double to advance McFarland to third, McFarland scored standing up on a wild pitch. All of the Terps’ second-inning runs came with two outs.

After a scoreless third inning, the Hawkeyes joined Maryland on the scoreboard in the fourth.

Emma Henderson hit a deep fly ball to center field. McFarland battled the sun on the warning track and was unable to catch the ball, allowing Riley Sheehy to score. Marissa Peek followed with a single to center that landed just in front of the diving glove of McFarland. Henderson scored and Iowa trimmed its deficit down to four, 6-2.

In the bottom half of the inning, McFarland got a run back for the Terps as she crushed a 1-1 pitch over the wall for her first home run of the season.

“Jaeda is just an exceptional athlete so when she does stuff there’s such a wow factor attached to it … she’s had some growing pains this year but as she relaxes and just trusts and continues to work hard, amazing things just happen,” said Montgomery.

Ellefson led off the inning with a double to right center and she scored two batters later. Kerr singled up the middle, and Carter fired the ball home. Kerr moved up to second, but on the throw from the Hawkeyes’ catcher Peek to second, Ellefson ran home. Ellefson slid in safely, and Kerr advanced to third as the throw back home got past Peek.

Michaela Jones popped up in foul territory behind first which scored Kerr for the Terps’ ninth run of the game.

Ellefson drove home the Terps’ tenth run of the game in the sixth, clinching the win for the Terps as they defeated the Hawkeyes in mercy-rule fashion, 10-2.