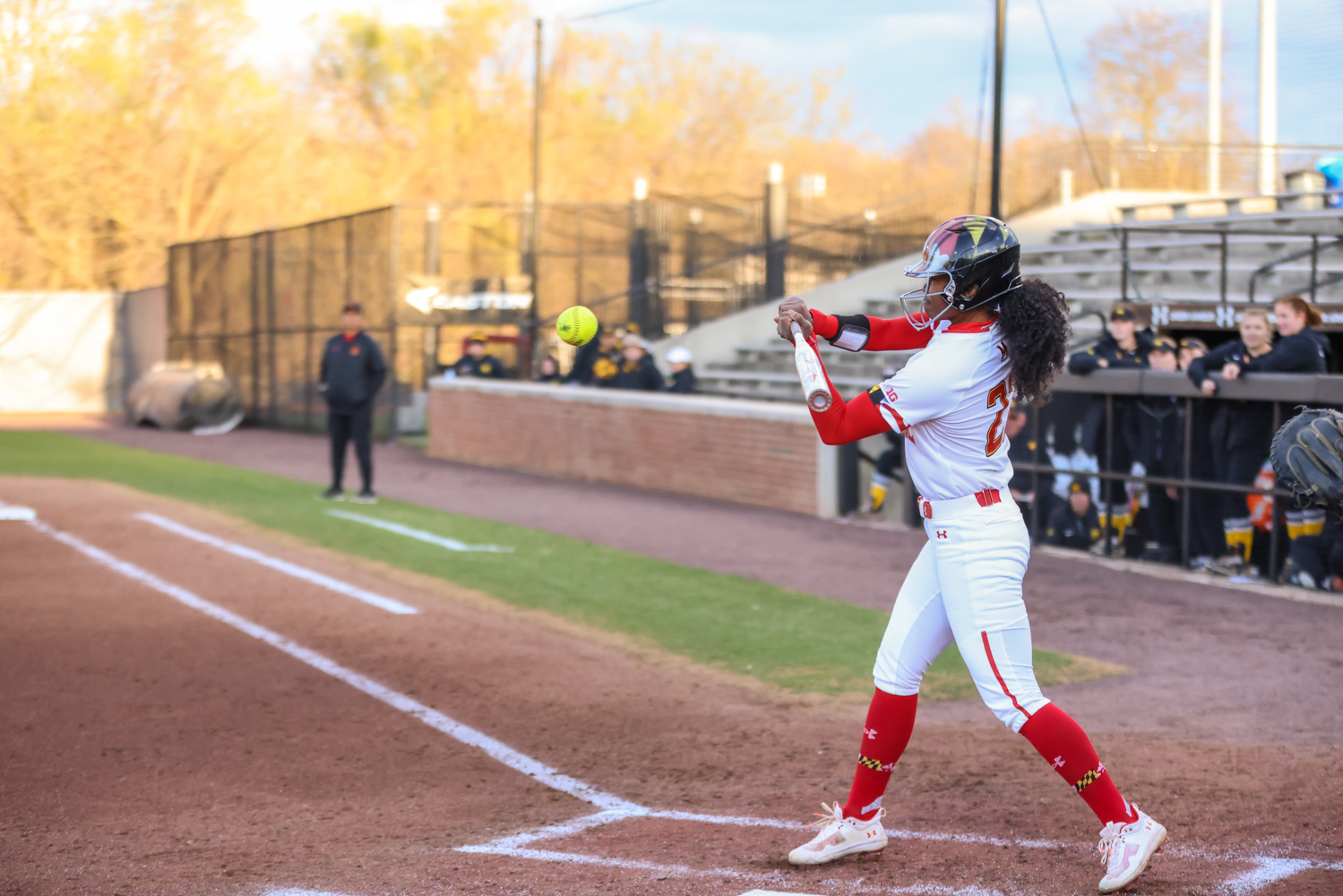 After having blown its one-run lead in the top of the sixth, Maryland softball came to bat looking to reclaim an advantage.

Jaeda McFarland tripled with one out, bringing Mackense Greico to the plate. Greico chopped one to third and McFarland ran on contact.

The throw beat McFarland to the plate, but McFarland acrobatically scored. McFarland ran around home, dove headfirst toward the plate and was majestically safe for the go-ahead run.

“In moments like those I just kind of like black out and whatever happens, happens. It’s just a reaction,” McFarland said.

The Terps defeated Iowa in a thriller, 8-5.

“It’s humbling … winning’s hard. To be honored by the administration [is] wonderful and to have my team with me out on the field, that meant everything,” Montgomery said.

Iowa struck first in the top of the first inning.

Brylee Klosterman led off the game with a nine-pitch walk and advanced to third after a sac-but and groundout. That brought Kalena Burns to the plate, who roped a single through the left side. Klosterman came home to score and the Terps trailed before they came to bat for the first time.

The Hawkeyes added a couple of runs in the second frame to extend their lead to three.

Standing on third with one out in the inning, Grace Banes scored on a passed ball as she got her hand across home just before the tag was applied by Trinity Schlotterbeck.

Later in the inning, Klosterman drilled a double down the left field line, just past the diving arms of Michaela Jones. Marissa Peek scored from third, giving Iowa a 3-0 lead.

Maryland had a chance to join Iowa on the scoreboard in the bottom of the second inning with the bases loaded and no outs.

Following a strikeout and a flyout, Megan Mikami hit a soft pop up in front of the circle. Breanna Vasquez dove but couldn’t catch the pop up. Taylor Okada scored on the play for the Terps’ first run of the game.

But the Hawkeyes snatched that run right back the next inning.

Tristin Doster doubled to the right to start the third inning and advanced to third on a groundout. Riley Sheehy followed with a single over the head of Okada, scoring Doster easily.3

Down 4-1 in the bottom of the third, Maryland scored four runs to take its first lead.

Greico, Schlotterbeck and Okada all reached base to start the inning. After a pop up, Jones hit a sac-fly to center field for the second Maryland run of the game. Back-to-back doubles from Ruby Butler and Kiley Goff scored three Terps, giving them a 5-4 lead entering the fourth frame.

“We started off a little slow [offensively] and then towards the end we took it upon ourselves to get our approaches together. We made a plan, stuck with it, and good things happened,” said McFarland.

The offense slowed down the next two innings as neither side scored a run.

Haley Ellefson entered in relief of Schlotterbeck with one out in the top of the sixth inning. She needed to throw the final five outs to secure the win for the Terps.

Ellefson loaded the bases with three straight walks. After the next two batters were retired, Iowa tied the game off the bat of Burns. Burns hit a slow roller to Butler at short, who threw to second base for the force out. Nia Carter got in just before the throw, and everyone was safe on the fielder’s choice.

McFarland tripled with one out in the bottom of the sixth and scored on a play at the plate on a Greico grounder. McFarland was out by a mile but maneuvered her body to touch home before the tag touched her to put Maryland ahead 6-5.

Ellefson notched an RBI single a few batters later. The Terps added another run in the sixth on an error at short, extending their lead to three.

Ellefson retired Iowa in order in the seventh, clinching the series opening win for Maryland.