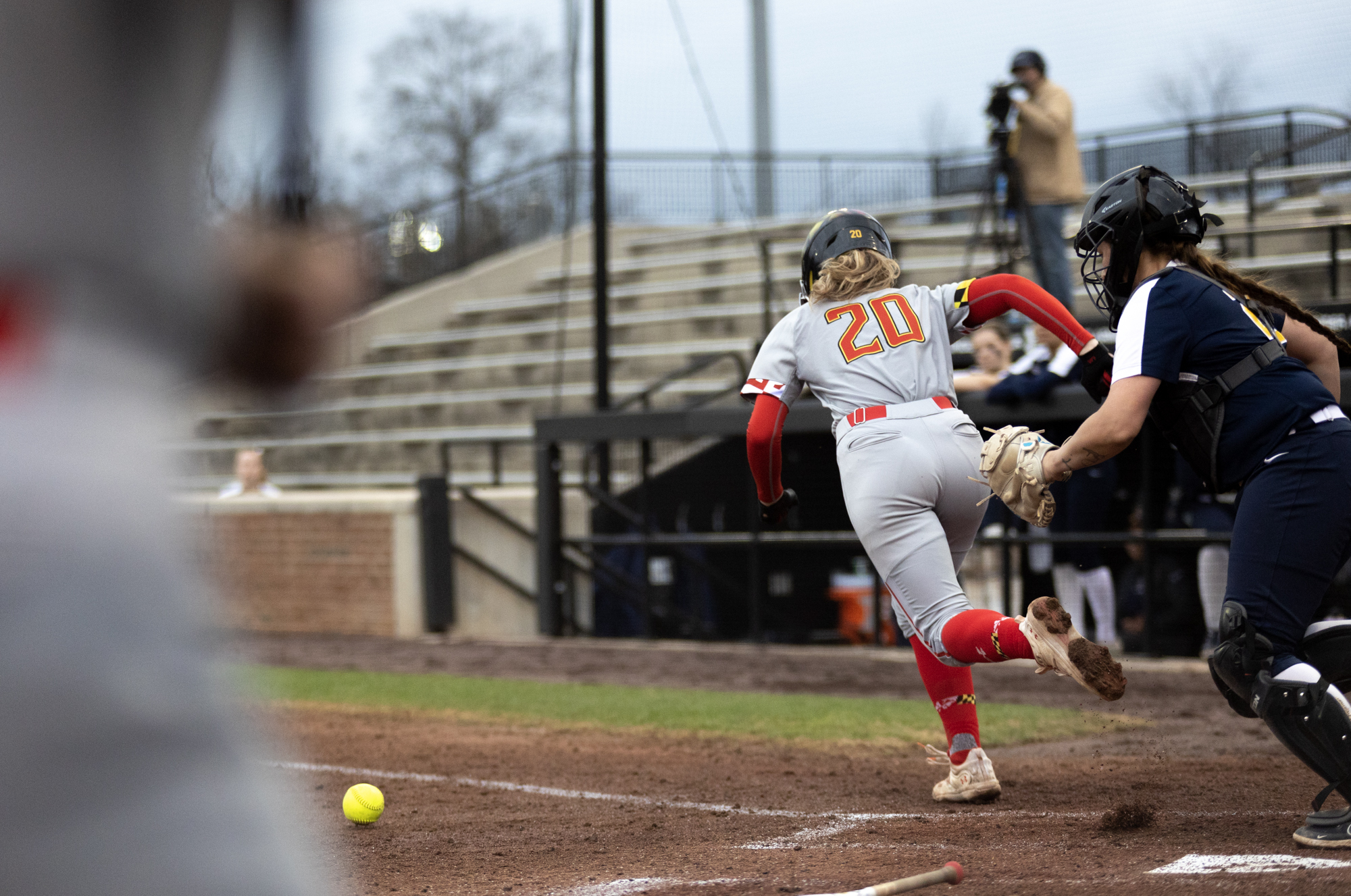 Up 1-0 entering the bottom of the third, Maryland softball exploded for seven runs to blow the game open.

Four hits, four walks, four stolen bases and one Coppin State error resulted in a seven-run inning for Maryland. Fourteen Terps came to bat in the third inning as Maryland hit around the Eagles’ defense.

Courtney Wyche and Haley Ellefson shut down the Eagles through the next two innings and Maryland downed Coppin State in mercy-rule fashion, 8-0.

“To run rule them and only need four innings to do it, that’s probably solid. I think we could have been better,” Montgomery said. “We got to clean up some at-bats where people were way early and get better quality at-bats in those situations … but other than that I thought it was an OK game.”

Maryland welcomed local foe Coppin State to College Park Wednesday evening. The Eagles are a break in the Terps’ Big Ten schedule before they travel to Purdue this weekend.

The starting pitching matchup favored Maryland. Wyche, with a sub-three ERA, started in the circle for Maryland, while Kayleigh Reome took the ball first for Coppin State.

Reome entered with an ERA north of 14, having allowed at least six runs in seven of her nine appearances.

While she didn’t allow a run through the first two innings, Wyche struggled with her command early. Wyche threw 36 pitches, 15 balls for a strike percentage of just 58.3 percent. Wyche pitched herself into a jam in the second, walking two Eagles with two outs. Wyche responded with a two-pitch fly out, ending the inning without a runner scoring.

In a scoreless game in the second inning, Jones crushed a two-out, two-strike ball into deep center field. Jaslyn Sanchez leaped at the wall but couldn’t extend her glove over the fence. She couldn’t rob Jones of a solo home run. Jones’ fourth homer of the season gave Maryland a 1-0 lead.

“I knew the girl was not throwing it super fast so I knew I had to be late, see it deep. I just had to relax up there and do what I do, so that’s what I did, and that was the outcome,” said Jones.

Similar to the second frame, Wyche’s third inning involved back-to-back two-out walks to put herself in a pickle. And just like the previous inning, Wyche ended the frame without a run scoring.

Maryland scored a pair of runs in the third without the Eagles registering an out.

Campbell Kline led off the third inning with a triple off the right field wall and scored on the next pitch. Merissa Borkowski bounced a hit off the glove of Makayla Caballero into the outfield. Borkowski stole second and advanced to third as the ball got past the Eagles’ infield. She trotted home on a hard-hit single by Mackense Greico through the right side.

Greico’s single brought a pitching change for the Coppin State, as Shawnee Ronyak entered in relief of Reome.

After she walked, Taylor Okada attempted a steal of second base with Kamryn Davis on third. Okada got caught in a rundown but slid back to first safely. During the rundown, Davis ran home and scored as the throw got past Caballero, who moved to catcher during the pitching change.

Okada took a lead at second and scored following a liner into the gap off the bat of Taylor Liguori. Megan Mikami entered to pinch-run for Ligouri and later scored on a bunt by Jones.

With the bases loaded, both Kline and Borkowski walked to score the seventh and eighth runs of the game for Maryland.

Wyche was relieved by Ellefson with one out in the top of the fifth inning. Ellefson got the final two outs of the frame, clinching the five-inning victory for the Terps.

“We knew this was a midweek [game] that we could handle and we wanted to get new kids new opportunities so they could be ready for this weekend to go in and keep our momentum going for our big weekend at Purdue,” Jones said.