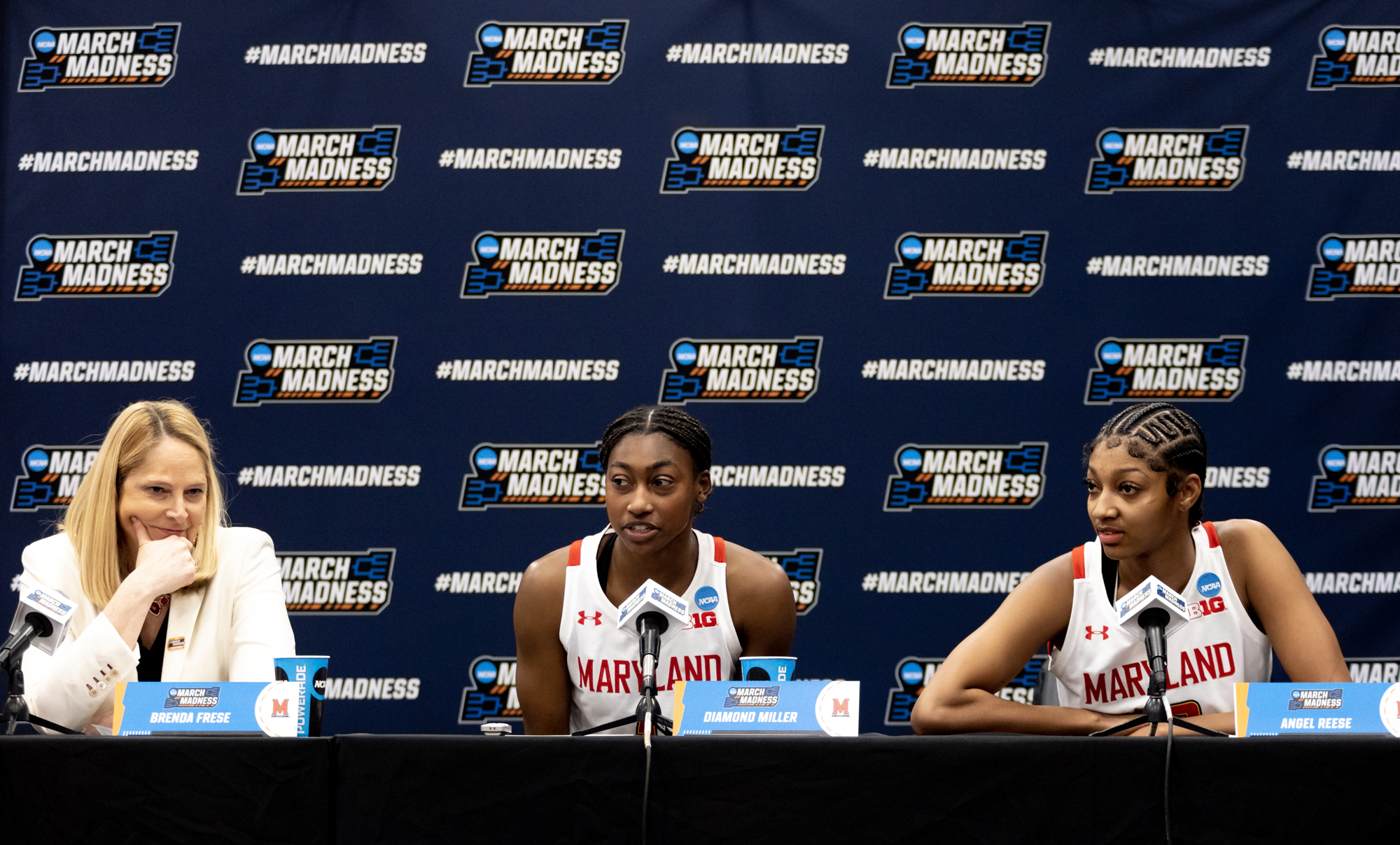 Maryland women's basketball head coach Brenda Frese, Diamond Miller and Angel Reese speak to reporters at a press conference following the Terps' 89-65 win over Florida Gulf Coast in the second round of the NCAA tournament on March 20, 2022. (Julia Nikhinson/The Diamondback)

When the Maryland women’s basketball players walked off of the court in Spokane, Washington, their black jerseys soaked in sweat and their heads dipped slightly, it looked similar to the end of last season.

The Terps lost in the Sweet Sixteen for two straight years. But while the endings may have looked the same and featured almost the same roster, the seasons told vastly different stories.

In 2021, Maryland’s campaign featured new additions, fit in seamlessly with existing pieces and melded to create a dynamic product. The 2022 season was similar but included a constantly rotating lineup — leaving the remaining players to try to fill different roles than they did before.

Coach Brenda Frese’s squad dealt with a host of ailments that forced the coach to juggle her lineups and necessitated a challenging routine for her players — adjusting to playing without a teammate and then reintegrating that player into the lineup.

“When you don’t have enough reps together and enough practice time, it’s clearly evident,” Frese said in early March. “And when you then go out of the equation, then your team has to grow without you and then it has to grow with you.”

It started when part of the team’s nucleus, graduate student point guard Channise Lewis, suffered setbacks in her rehabilitation from an ACL tear.

Before the season started, Frese said she potentially saw Lewis returning in November. Instead, Lewis didn’t play a game all season and announced on Feb. 2 that she wouldn’t be able to return for the season due to “unexpected challenges” in her rehab.

That pushed more playmaking responsibilities into the hands of guards Shyanne Sellers and Katie Benzan, forcing them to play more on the ball than they would’ve if Lewis was available.

The biggest blow to Maryland’s season came before it started, when the team announced junior forward and Preseason All-Big Ten Team nominee Diamond Miller wouldn’t be ready to start the season because of a knee injury.

Miller missed both of the Terps’ exhibition games and the first four games of the regular season before coming off of the bench against UNC Wilmington and No. 6 Baylor. Her injury concerns would continue from that point, as she missed the next six games.

Maryland went 7-3 in those games, with all three losses coming to top-10 teams, including eventual National Champion South Carolina. But the effects of Miller’s injury extended beyond her 10 absences.

While she showed occasional flashes of the player she was a year ago, Miller heavily regressed from her breakout sophomore campaign. She averaged 13.1 points on 40.8 percent shooting from the field, both precipitous drops from her 17.3 points on 50.6 percent shooting averages from last year.

She had fewer free throws and rebounds per game and saw a slight increase in turnovers. It looked like she’d turned a corner after a stellar first two games of the NCAA Tournament, but her frustrating season culminated in the Sweet Sixteen loss when she played under 20 minutes, shot 3-of-11 from the field and fouled out.

“We just got to soak this in. It hurts, but I think the better team won today,” Miller said after the loss.

Two of the games Miller missed were in the Bahamas, when the Terps lost to NC State and Stanford by a combined 36 points. Those games featured the most shorthanded Terps team to date. Maryland was also without Katie Benzan and Faith Masonius, who did not make the trip due to illnesses.

The lack of bodies showed up in the minute totals, as Chloe Bibby played all 80 minutes in the two games.

Then, Faith Masonius got hurt, tearing her ACL on Jan. 2 and robbing Frese of a key bench piece who was continuing to emerge as a reliable player on defense and evolving her offensive game.

“Obviously now as we got Diamond back, to have a hit like this with Faith was obviously extremely disappointing,” Frese said after she announced Masonius’ injury.

Even players who were able to stay on the court were hobbled. Redshirt junior Mimi Collins struggled through lingering groin and toe injuries and saw statistical dips in points, shooting percentage and rebounds.

Right as Maryland looked like it might be hitting its stride, with three straight wins against conference opponents, Ashley Owusu sprained her ankle and had to sit out four games. She’d return off the bench against Michigan, but was ruled out for the last game of the regular season due to an illness.

Only three players — Angel Reese, Sellers and Bibby — were available for every game and practice this year, Frese said. It took its toll on the team, consistently forcing them to adjust to playing without a teammate before reintegrating them into the flow of action.

Add that adversity to a brutal schedule across the regular and postseason that featured nine ranked teams in the AP Top-25 released ahead of the NCAA Tournament.

The Terps went 5-9 in those games, playing some of the opponents twice.

Those trials were intentionally built into the schedule by Frese to build resilience in her team. In some senses it worked: Down big against Stanford in the Sweet Sixteen, the Terps cut a 26-point lead to just eight and made what could’ve been an embarrassing blowout into a competitive game.

However, teams don’t get a victory for making it a close game. Maryland’s season ended there, the same place it did a year ago. On the surface, that’s a disappointment, a lack of growth from a team that stayed almost entirely the same.

But that first team featured near-perfect circumstances, the second was instead filled with constant hardship.

There won’t be any reprieves for this loss like there were at the end of last season, Bibby and Benzan are gone, graduating after stellar college careers. Owusu is in the transfer portal and will likely be a member of another team soon. Miller and Masonius will be seniors, with just one more chance to make that elusive run.

But the show must go on.

CLARIFICATION: This story has been updated to reflect Ashley Owusu’s announcement that she entered the transfer portal on April 5, 2022.