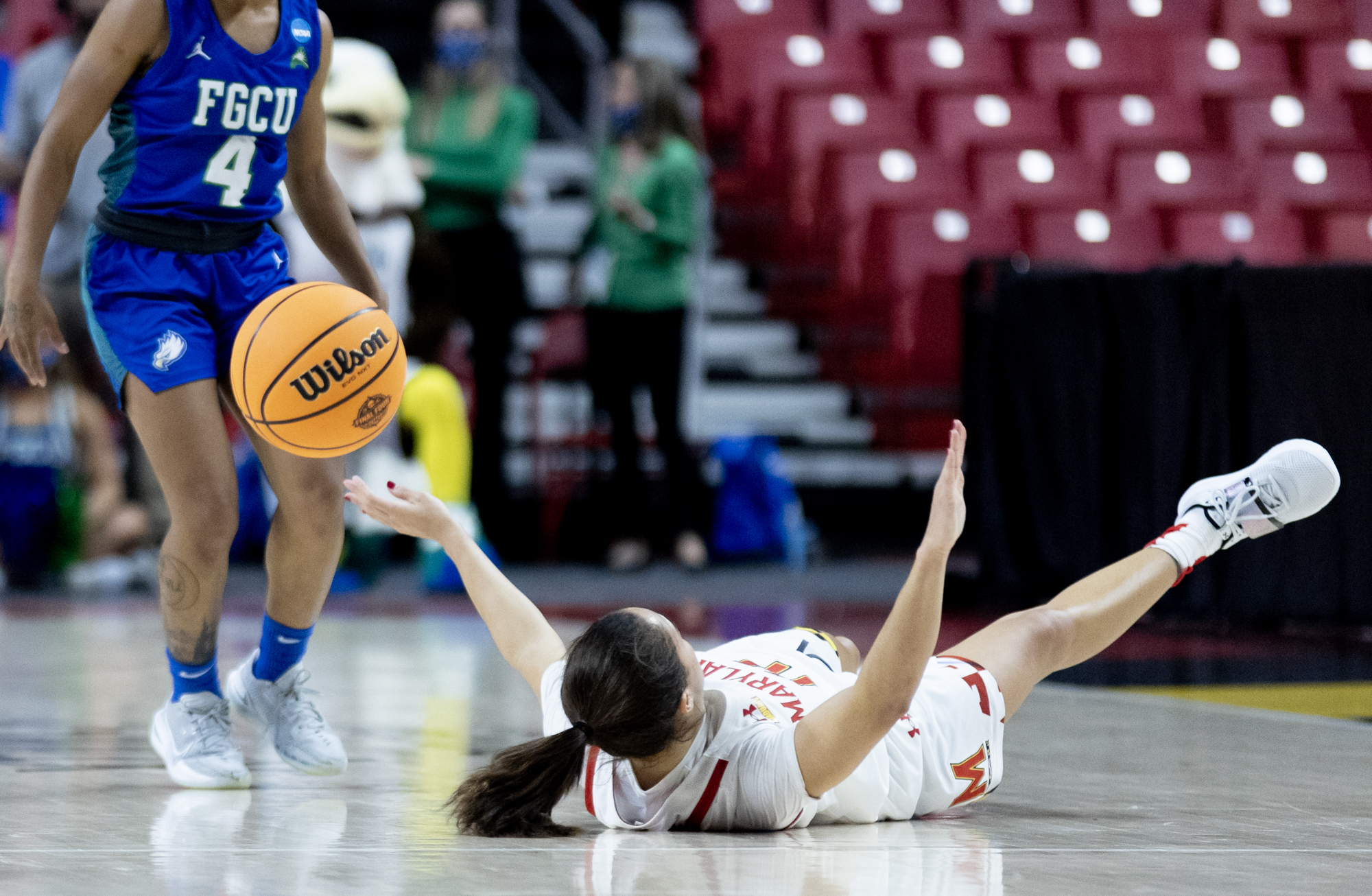 Katie Benzan falls during Maryland women's basketball's 89-65 win over Florida Gulf Coast in the second round of the NCAA tournament on March 20, 2022. (Julia Nikhinson/The Diamondback)

After Shyanne Sellers’ first free throw miss, she took the ball from the referee and got back into her routine for her next attempt.

After her second miss, Chloe Bibby, who played her last game as a Terp on Friday, went over to give words of encouragement and a pat on the head to the freshman guard.

After her third miss bounced high off the back of the iron and when it landed outside of the hoop, Sellers jogged back to defend and shook her head in disappointment.

Early in the fourth quarter with Maryland women’s basketball down 19, that 0-of-3 trip at the free-throw line didn’t appear significant. But as the clock ticked down and the Terps mounted a spirited comeback, those three misses loomed large.

Maryland missed six free throws in what ended up being a six-point loss, a 72-66 defeat to Stanford that ended its season in the Sweet 16 for the second year in the row.

The inconsistent free throw shooting wasn’t the main reason Maryland lost, as the Cardinal missed seven penalty shots of their own.

Those shots were indicative of how the Terps lost along the margins of the game. They lost tiny battles throughout the contest that added up on the scoreboard.

“Sometimes those 50/50 balls we were caught a second behind and they took full advantage of that,” Bibby said. “I think those little one-percenters… we were a second late and they punished us for it.”

Those 50/50 balls manifested in the teams’ rebound differential. Maryland’s defense did its part for much of Friday’s contest — it limited the Cardinal to just 45.6 percent shooting from the field and forced 18 turnovers.

But Stanford extended possessions, outrebounding the Terps by 18, allowing it to make up for its lack of offensive dynamics.

Even that solid Maryland defense experienced some breakdowns.

Early in the game, the Terps allowed a host of open shots — layups via untracked backdoor cuts and warm-up threes via inadequate defensive coverage.

They cleaned it up, but those points helped Stanford generate the cushion it needed to stay ahead until the final buzzer.

The main factor in Maryland’s loss was poor offensive play. The Terps shot just 33.8 percent from the field and a dismal 15.8 percent from behind the arc. They only turned the ball over seven times, but their ball movement was lacking with just eight assists.

“We weren’t giving them their first option,” Stanford’s Haley Jones said. “I think usually they get shots pretty quickly on offense, but I think we made them look for those second, third options.”

Maryland had just two fast break points and its offense bogged down in the half-court. The Terps were unable to get the marginal advantages needed to break down a defense as dominant as the Cardinal’s.

Coach Brenda Frese stressed the importance of sharing the ball and that swinging the ball along the perimeter could open up opportunities. Her team wasn’t able to do that, finishing the season with another subpar offensive performance.

Frese’s squad put up a strong effort against a great team. Diamond Miller said the better team won in Friday’s matchup, but the Terps made a game of it. In the fourth quarter, they outscored the Cardinal by 17, out-rebounded them by five, turned them over six times and held them without a field goal for nearly seven minutes.

“You can’t really print my thoughts,” VanDerveer said about the final frame.

She also said she was happy that there were only four quarters, and rightfully so.

If Maryland got a fifth quarter, there’s a good chance they’d be the ones playing Sunday, Tweeting about how “Gr8 it is to be Elite,” and slapping a big red and black “M” on the locker room bracket in Spokane, Washington.

But the Terps don’t get a fifth quarter.

Instead, they get a long offseason, one where they’ll ponder the margins that sent them home disappointed.