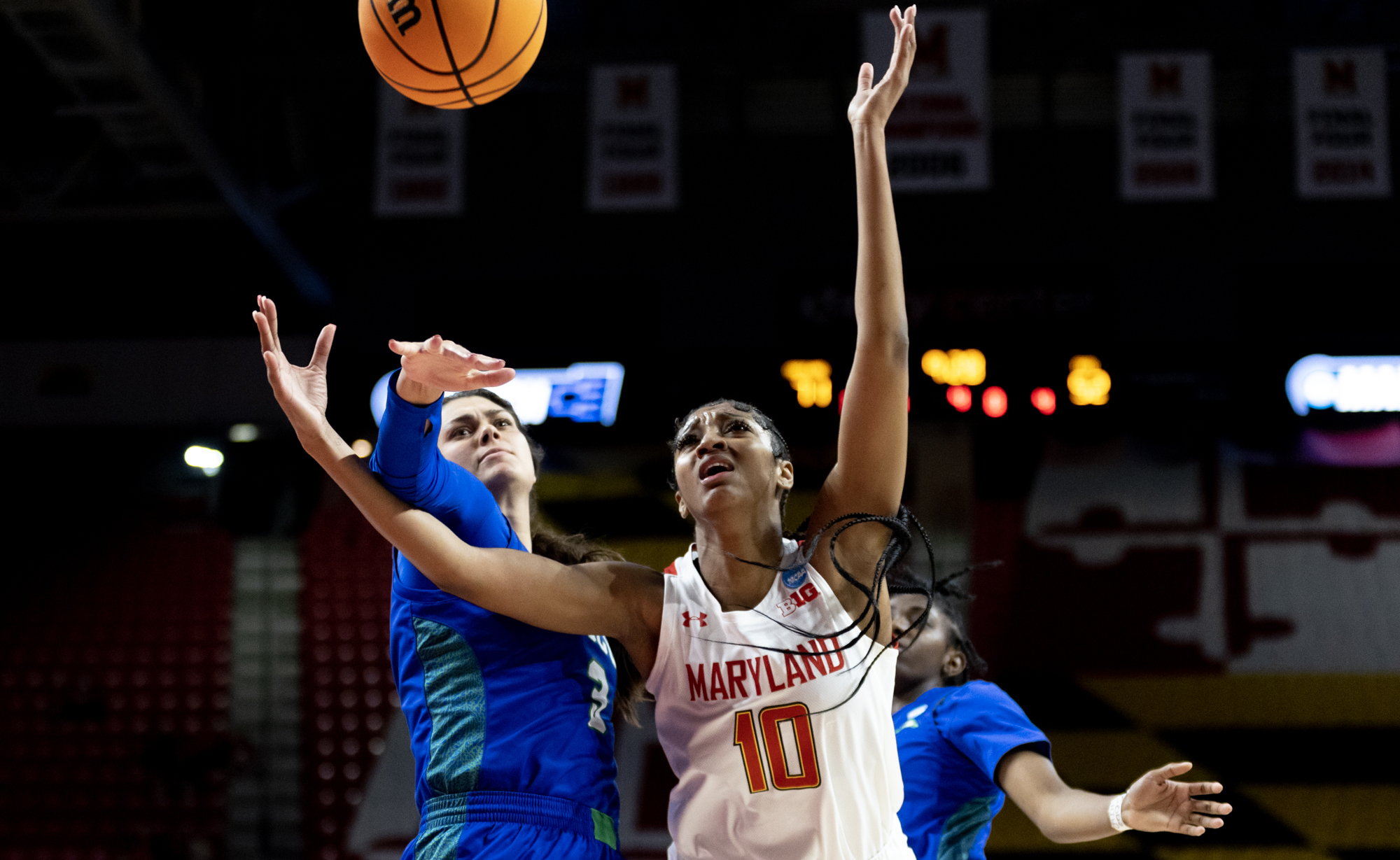 Angel Reese attempts to grab a rebound during Maryland women's basketball's 89-65 win over Florida Gulf Coast in the second round of the NCAA tournament on March 20, 2022. (Julia Nikhinson/The Diamondback)

Maryland women’s basketball, through all of its offensive woes against top-seeded Stanford, played crucial defense in the second quarter. By holding Stanford to just a 1-for-10 showing from the field through 6:15 of action, the Terps gained some semblance of hope.

They were outscoring the Cardinal 7-5 and had looked to enter the half with much-needed momentum. That was until the Hull sisters initiated a gut blow to Maryland ahead of the intermission.

Lexie Hull received one of several beautiful feeds from Haley Jones to bring Stanford’s lead back up to 10. On the following possession, Lacie Hull, assisted by her sister, connected on a picturesque three-pointer that prompted coach Brenda Frese to call a timeout to regroup.

Maryland’s inability to respond on offense reared its ugly head once again, only setting the Terps back even further. Stanford ended the half on a 12-6 run, putting Maryland in a 16-point hole at the break.

Its offense never got going from then on and the interior game couldn’t match up to Stanford’s as Maryland’s season came to an end in the NCAA Spokane Regional, 72-66.

For the second consecutive season, the Terps were eliminated from the NCAA tournament in the Sweet 16, although this time they were the underdogs.

“This team could have given up many times just through all the adversity that they faced,” Frese said. “To be able to get back to a Sweet 16 with a season that was unlike any season we’ve ever experienced … just proud of the fight.”

Maryland struggled on the offensive end to kick things off, starting 0-for-5 from the field, including a 1-for-9 showing across the opening five minutes of play.

Stanford, on the other hand, executed its game plan to perfection. Jones was the standout for the Cardinal, making two early threes and adding two assists to the team’s six in the quarter. She finished the night with 17 points, 10 rebounds and six assists.

A particular backdoor feed to Anna Wilson at the 4:21 mark helped define the one-sided affair. Jones directed traffic up top before delivering a crisp bounce pass to a cutting Wilson for the easy bucket, rewarding her team with a 12-6 advantage.

Open looks like that came in bunches for the higher seed. Meanwhile, the Terps hit some major blockades in the form of its poor field goal percentage and foul trouble — with Maryland’s leading scorer in the tournament, Miller, picking up two early on.

The Terps settled down a bit at the start of the second quarter thanks to their improved defense, but fouls continued to plague any momentum swing. Shyanne Sellers ended the half with three fouls, while Angel Reese joined Miller with two fouls.

Despite the plethora of fouls, defensive stops continued to mount for Maryland. The Cardinal shot just 1-for-10 by the 3:45 mark of the quarter, but the Terps’ deficit would never shrink below eight points.

Cameron Brink and Jones combined for 23 points in the first half. Maryland, on just eight made shots from the field, produced 23 total points.

“I thought we spent too much time trying to feel out that first half, but really proud of the fact that we didn’t quit fighting,” Frese said. “You see [Stanford] clicking on all cylinders and we had to have that as well on the offensive end … unfortunately we didn’t.

From a minus-15 rebounding margin, to an 0-for-6 showing from three, the Terps were on thin ice heading into a pivotal second half. As Miller picked up her third and fourth fouls before the third-quarter media timeout, the potential for a comeback seemed to be stalling out.

Stanford kept attacking the glass with authority as Francesca Belibi and Jones produced back-to-back second chance scores. Another missed three by Maryland then led to a quick lay-in by Kiki Iriafen, which pushed the lead to 20 points.

The Terps continued to falter, with Lexie Hull slipping out of an elevator screen to convert on an and-one attempt. The bucket came at the tail end of a 20-13 third quarter, which increased the Cardinal’s lead to an insurmountable 23 points.

“Sometimes those 50/50 balls we were caught a second behind and they took full advantage of that,” Chloe Bibby said. “They work really hard at that and they punished us for it.”

A 10-0 Maryland run showcased the desperate measures of its huge deficit, but Stanford applied enough pressure to keep any hope of a comeback at bay.

An 0-for-3 showing on a trip to the line by Sellers encapsulated the type of night it had been for the Terps as the defending national champions switched into cruise control from then on.

Even as Reese willed the Terps back within six on a buzzer-beating three, there just wasn’t enough time and offensive firepower for Maryland to mount the improbable comeback.

“A lot of teams could have folded [but] they just continued to put their head down and continued to fight,” Frese said.

The Terps couldn’t put together enough significant traction in this one as they saw their season end in the Sweet 16 for a second consecutive tournament.