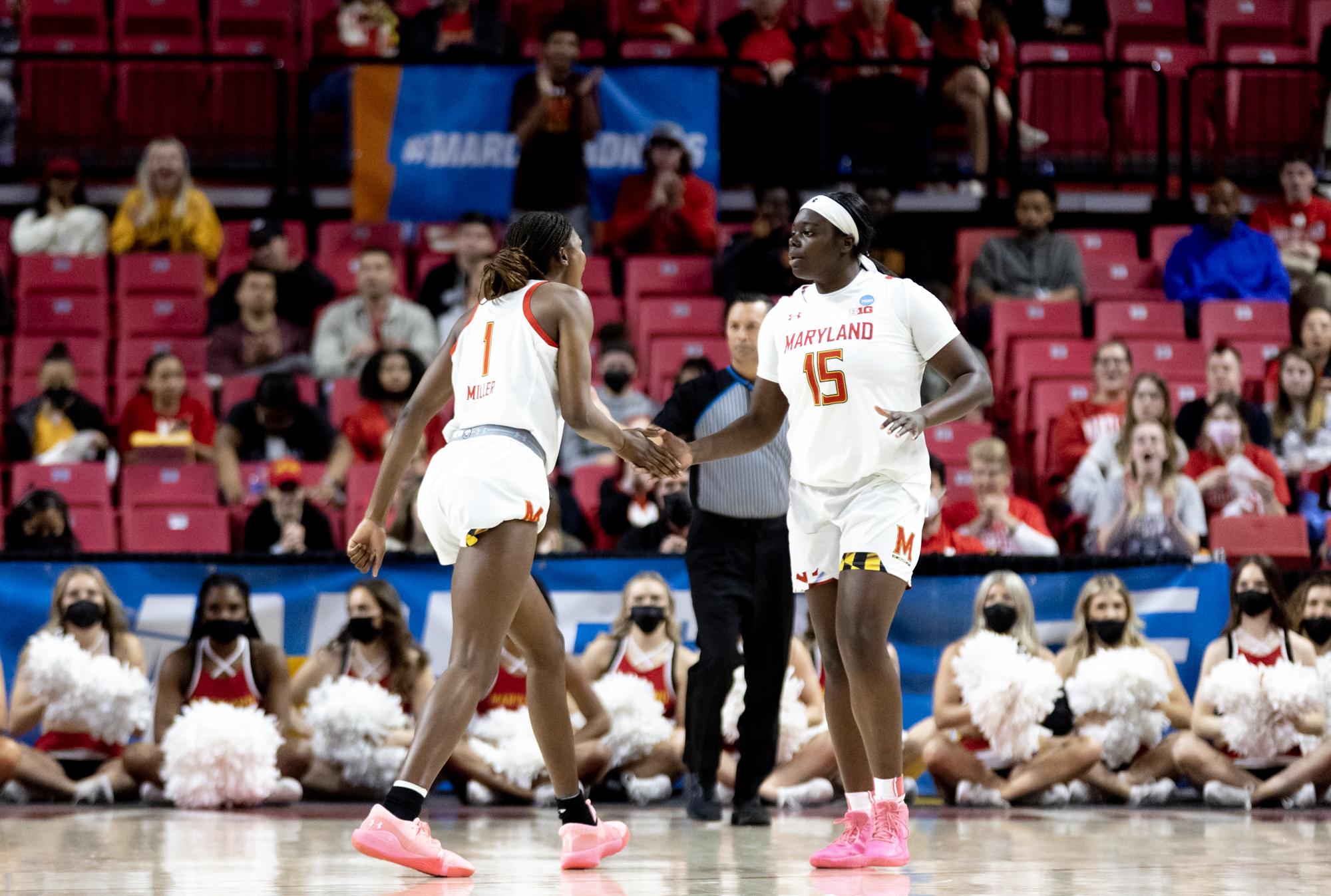 Diamond Miller and Ashley Owusu shake hands during Maryland women's basketball's 89-65 win over Florida Gulf Coast in the second round of the NCAA tournament on March 20, 2022. (Julia Nikhinson/The Diamondback)

This is how it was supposed to be.

When coach Brenda Frese envisioned what the season would look like for Maryland women’s basketball, she must’ve imagined a lot of games like Sunday afternoon: contests where her two star juniors — Ashley Owusu and Diamond Miller — took over the court and made the entire game a showcase of their talents.

It’s been a tough season for the pair, one filled with injuries, illness and the resulting inconsistency. But among that uncertainty, their skill remained, and it’s shone through like a Diamond through the first two rounds of the NCAA tournament.

“This is the first time I think this season that we’re all 100 percent healthy,” Miller said. “I think we’re thriving right in the right moments.”

She and Owusu combined for 44 points in the Terps’ 89-65 rout of Florida Gulf Coast to advance to the Sweet Sixteen for the second straight season. In the last two games Maryland will play at College Park this season, the pair have given the Xfinity Center a fitting send-off.

“They’re back to playing how they know how to play,” Frese said. They’re comfortable and confident and healthy.”

Owusu started off the Terps’ scoring with a three-pointer, one of three she hit on the day, but it was her interior game that drew the most highlights. Near the end of the third quarter, she went straight from a behind-the-back dribble into a spin move before knocking down a one-legged runner from the free-throw line.

A minute later, she’d drive to the hoop amongst a crowd of three Eagles and draw a foul for two of just three free throw attempts she’d have on the night.

“I thought she had to play through a lot of contact and I thought she should have went to the free-throw line even more,” Frese said. “But I loved her poise through it… she just finished plays whether [she got] the call or not.”

Earlier this season when Miller was out, Frese described Owusu as Batman without Robin.

Robin showed up, donning a white and red No. 1 jersey.

She knocked down her first three in the opening quarter and ran back the court holding up three fingers.

Her second and third threes landed in a two-minute second-quarter stretch. After the last one, she came back down the court with her tongue stuck out and two three-point signs by her waist.

The junior displayed a rhythm and joy that’s been absent for a while, aspects of her game that she’s seemingly recaptured in the break after the Big Ten tournament.

“In Indiana I did not help my team whatsoever, that feeling is not a good feeling,” Miller said. “[The last] two weeks of practice. I was really focused and I just knew my team needed me.”

Now the Terps go to the Sweet Sixteen, where their season ended last year. Their three-point loss to Texas ended a near-perfect season one where most of the team stayed healthy and gelled en route to the nation’s best offense.

The third member of Maryland’s triumvirate of stars is Angel Reese, who scored 21 against the Eagles.

Reese has been the most consistent Terp all season, playing in every single game amidst a constant carousel of pieces around her.

But now, she’s joined by what seems to be the best versions of Owusu and Miller and the three are dominating. Together, they combined for 65 points, the same as the entire FGCU squad.

The three each have claims to be Maryland’s best player and having a trio with that level of talent playing up to their potential is the main reason the Terps look like a legitimate title contender.

It’s something that’s not been a guarantee all season.

“When you have three All-American type players like that, that are so talented… that’s a dangerous team and they’re really locked in,” Frese said.

Or as Miller said, “We’re not expected to play no other way. This is what y’all been waiting for.”