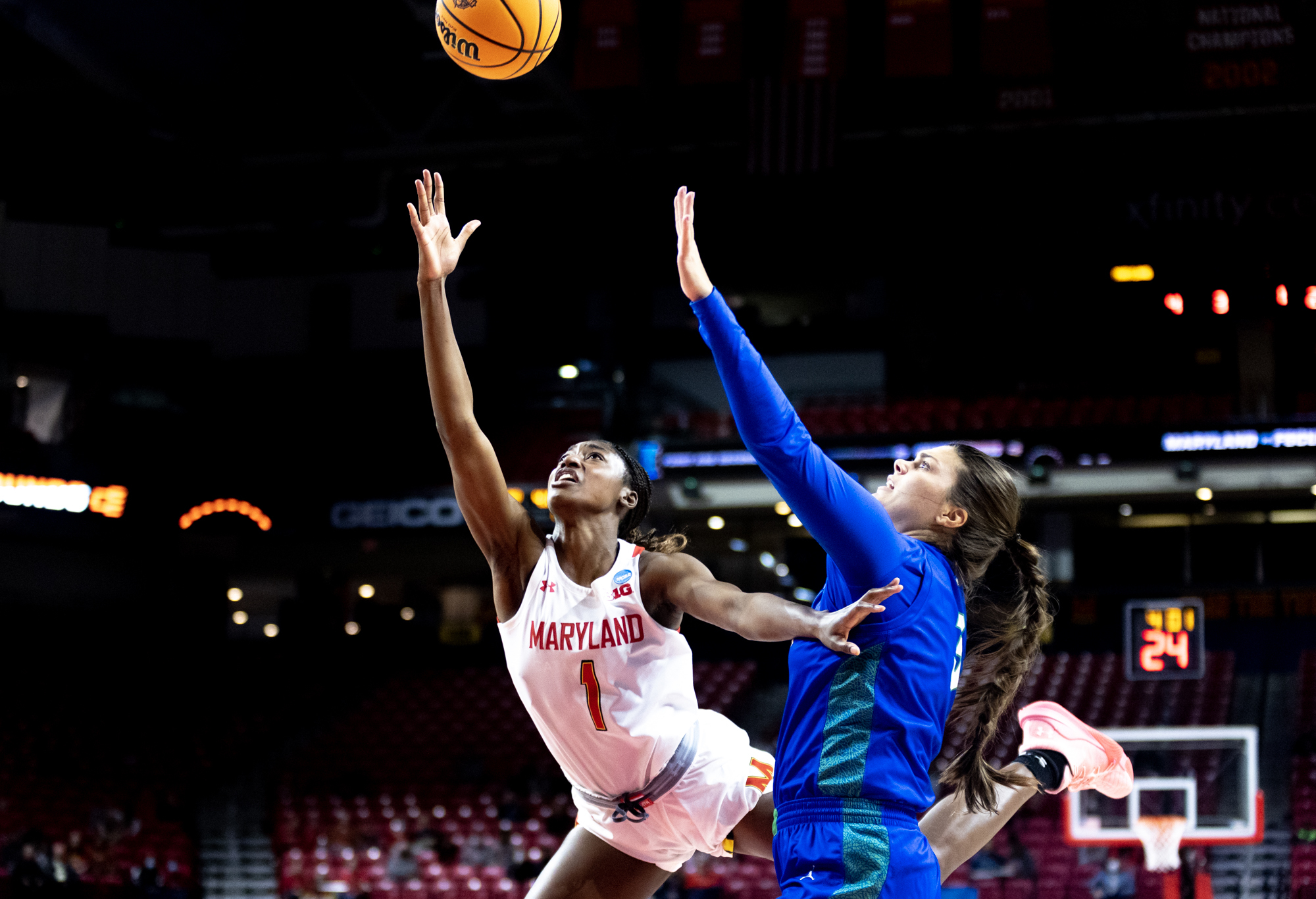 Diamond Miller attempts a layup during Maryland women's basketball's 89-65 win over Florida Gulf Coast in the second round of the NCAA tournament on March 20, 2022. (Julia Nikhinson/The Diamondback)

After falling behind by three late in the second quarter, Maryland women’s basketball found motivation through its effort on the defensive end.

As Tishara Morehouse tried to finish in the paint, Diamond Miller sent back the guard’s shot attempt. The pursuit of the ball was then left to Ashley Owusu and Morehouse.

With the ball hovering over the end line, leaving it would give Florida Gulf Coast the possession and potentially diminish Maryland’s electric run. Instead, the hustle of Owusu paid off, with the junior leaping from in bounds to corral the loose ball and throw it off of Morehouse, who was standing out of bounds.

It were those types of plays that were the difference-maker in the Terps’ second round matchup of the NCAA Tournament. Gluing together a dynamic offense with persistent defense allowed the Terps to clinch a spot in the Sweet 16, beating the Eagles, 89-65.

“We’ve continued to share the ball and play at a really high level, which is what you got to do in March,” coach Brenda Frese said. “This has been our mission all year and why we put the schedule together that we wanted to play.”

Both teams play a similar style of basketball and — from the opening tip — it was clear neither was going to deter from its high tempo offense.

Maryland got its buckets in transition, finishing with nine fast break points in the first quarter. FGCU, on the other hand, hoisted up shots in quick order due to its rapid-fire ball movement, leading to 10 early attempts from beyond the arc.

Threes by Kerstie Phills and Kendall Spray looked to cut into Maryland’s lead, but the Terps held strong, putting together a 6-0 run to gain a slight cushion. As quick as lightning, however, the Eagles responded with an 8-0 run, which gave them their first lead.

FGCU’s run was largely fueled by Maryland giveaways. Although for a large portion of the quarter the Terps played polished basketball, two late turnovers gave the 12-seed the confidence it needed to end the quarter tied at 23.

Even as Katie Benzan hit a thunderous three with seconds remaining to retake the lead, a quick finish the other way by Morehouse rekindled the momentum.

Two threes from Miller and a tough and-one jumper from Shyanne Sellers kept the Terps ahead in the second. But Spray and the rest of the Eagles continued to launch and connect from deep as the quarter progressed.

The final three of the half from Spray bookended a 36-second, 7-0 run that included an intentional foul penalty on Mimi Collins. FGCU had zapped the momentum after going 7-for-18 from three, leaving the Terps scrambling defensively.

But trailing by three, the clock was on Maryland’s side. Just over three minutes remained for the Terps to take back control — and they did in an emphatic way.

“We made the adjustment that we were more comfortable with and I thought it got us playing harder, more aggressive, and you started seeing where the confidence grew on the defensive end,” Frese said.

Great defense led the charge. Kiersten Bell was called back court thanks to heavy pressure from Maryland’s zone defense. Angel Reese then followed that up with great on-ball defense against Morehouse, forcing a double-dribble.

The defensive effort led to the Terps’ offense, supplied by Miller and Owusu. Chloe Bibby then found the net from deep to end the half, capping off an 11-0 run to end the half.

“We realized we were just kind of playing off each other, but you need to communicate on defense,” Miller said. “We understood their offense and their game plan and we executed defense.”

[Maryland women’s basketball breezes by Delaware in first round of NCAA tournament, 102-71]

That energy was not to be deterred by the halftime intermission, however, as Maryland opened up the floodgates in the third. Led by Reese’s dominance inside, the Terps extended their run to 19 straight points before FGCU finally scored at the 7:03 mark.

The rally continued, with the Terps building their lead from the free-throw line. A 10-for-12 showing in the third added onto the team’s 30 total attempts.

By quarter’s end, Maryland’s run had reached 35-13. Just like its first round matchup, a decisive third quarter effectively put the game out of reach for the opposition.

Miller and Owusu were once again the main catalysts, scoring 24 and 20, respectively. Reese chipped in 21 points on just six field goal attempts, going 11-for-14 on free throws, as Maryland ran up the score once again.

Even as the game was all but put away, the Terps still fought for loose balls and played aggressive defense down the stretch. It’s that brand of hunger and dedication to its mission that allowed Maryland to advance to Spokane and the Sweet 16.

Maryland is heating up at the right time as they await their next opponent.

“I think we have each other’s back at the right time, at the right moment,” Reese said. “As long as we stick together within our circle, we can go as far as we want to go.”