Maryland women’s basketball breezes by Delaware in first round of NCAA tournament, 102-71 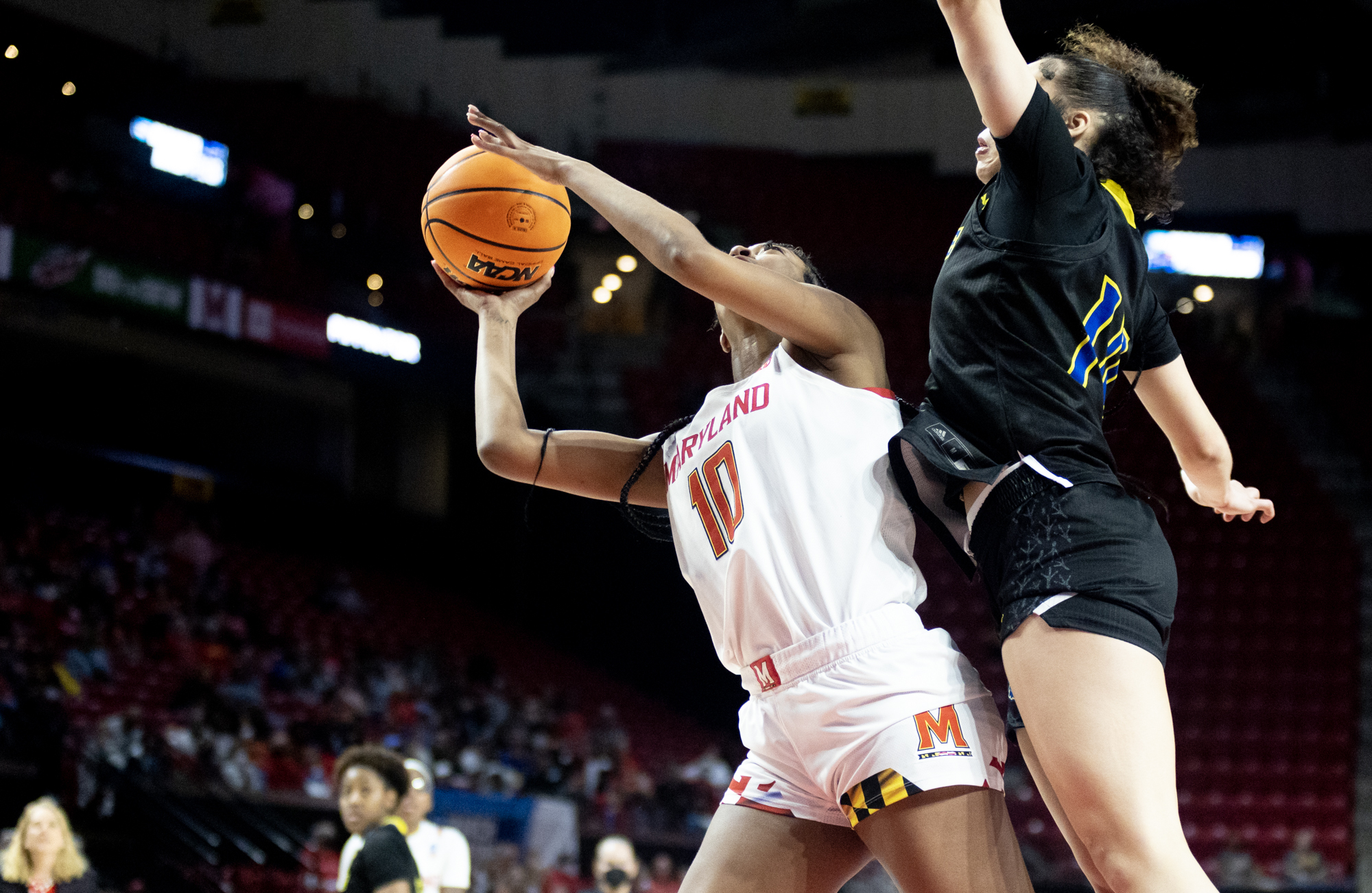 With Maryland women’s basketball on cruise control during a dominant third quarter run against Delaware, Angel Reese found herself in an enticing position.

Reese seemed to have all the space in the world as she stood at the top of the three point arc with the Terps up by 19 points. After making just one 3-pointer on ten attempts this season, Reese pondered the possibility of delivering on her second make from beyond the arc.

Earlier in the game, Reese was left with plenty of space on the wing and chose to fire away. It prompted an irate coach Brenda Frese to sub out Reese for her reckless decision-making.

While the crowd egged Reese on, she remembered the swift punishment from Frese back in the first half. This time around, Reese chose the safer option. It paid off, initiating an offensive set piece that led to a bucket by Chloe Bibby.

“I was very proud of her; it took great maturity,” Frese said. “[In the offseason] she can start extending that range.”

It was all smiles from Reese and the Maryland coaching staff after that, indicative of the sensational effort by the Terps in the first round of the NCAA tournament. The offensive clinic from Maryland was too much for the Blue Hens to handle, leading to a lopsided 102-71 victory.

“Everybody was scoring and sharing the basketball,” Katie Benzan said. “That’s how we pride ourselves playing Maryland basketball, that’s just a fun way to play.”

“We pushed the floor and we were hitting shots today. We got Katie good looks today … when she’s hitting our offense flows a lot better,” Diamond Miller added.

Maryland was assertive from the opening tip, with Reese being the main catalyst.

After struggling against Indiana in the Big Ten tournament quarterfinal, the third-team All-American put up 11 first quarter points. She cashed in on her quality looks inside while also producing an efficient 3-for-3 showing from the charity stripe.

“It’s really been an emphasis these last couple of weeks just having an inside-outside presence,” Frese said. “Angel’s such a tremendous presence down low, but she’s also a tremendous passer.”

The rest of the offense thrived too, with NCAA tournament newcomer Shyanne Sellers making her mark after a beautiful step through put the Terps up, 15-6.

The Blue Hens were able to stay within striking distance down the stretch as Maryland’s fast-paced offense outran its legs at times. But Delaware’s 1-for-9 showing from deep helped Maryland enter the second period up by double-digits.

Maryland continued to push the tempo, making a pair of highlight reel plays on the fast break.

At the 7:05 mark, an outlet pass to Reese stranded the sophomore too far under the basket for her liking. Instead of forcing up a contested shot, Reese improvised, finding the trailing Miller for the easy lay-in.

A few possessions later, after back-to-back threes from Jewel Smalls, a 2-on-1 fast break for Sellers and Miller led to another flashy play from the freshman guard. Sellers drew the defense, giving her the space to feed Miller with a behind-the-back pass for another easy layup.

While the Terps’ offense kept firing on all cylinders, Delaware maintained a manageable deficit thanks to a terrific second quarter from Jasmine Dickey.

After Dickey shot just 2-for-8 from the field in the opening ten minutes, the CAA Player of the Year erupted for 14 points in the second quarter.

A performance like that would normally pull the Blue Hens within single digits. But as Reese took over in the first quarter, Benzan took over down the stretch of the second. Her four threes were a crucial response to Dickey, helping give Maryland a 49-39 lead at the half.

“We didn’t want to take our foot off the gas,” Frese said. “For us to be able to come out and play an inspired 40 minutes, that’s what it’s going to take every round and this is the level of intensity you have to play at if you want to be able to advance.”

Dickey and the Blue Hens kept up the pressure early in the third quarter, but a pivotal and-one finish by Ashley Owusu recaptured the momentum.

Owusu’s tough floater through Paris McBride’s contact pushed the lead back up to 13. Her subsequent free throw was followed by a corner three from Bibby that extended the lead to 17

The lead only grew from there. Maryland finished off the final 7:07 of the quarter on a 25-12 run, effectively wrapping up the contest with an 80-56 advantage after 30 minutes of action.

“We didn’t force anything, just moving the ball side to side, in and out,” Benzan said. “That ball movement really opened up the three point line for us.”

While Reese and Benzan shined the brightest early on, it was the late game scoring by Owusu and Miller that kept Maryland’s comfortable lead intact.

Miller had nine points in the fourth while Owusu chipped in eight. They finished with 23 and 24 points, respectively, as all five starters hit the double-digit scoring mark.

The win marked the third time the Terps have reached the century-mark this season after seven such instances last season. Maryland will now look ahead to its second round matchup on Sunday versus 12-seed Florida Gulf Coast.