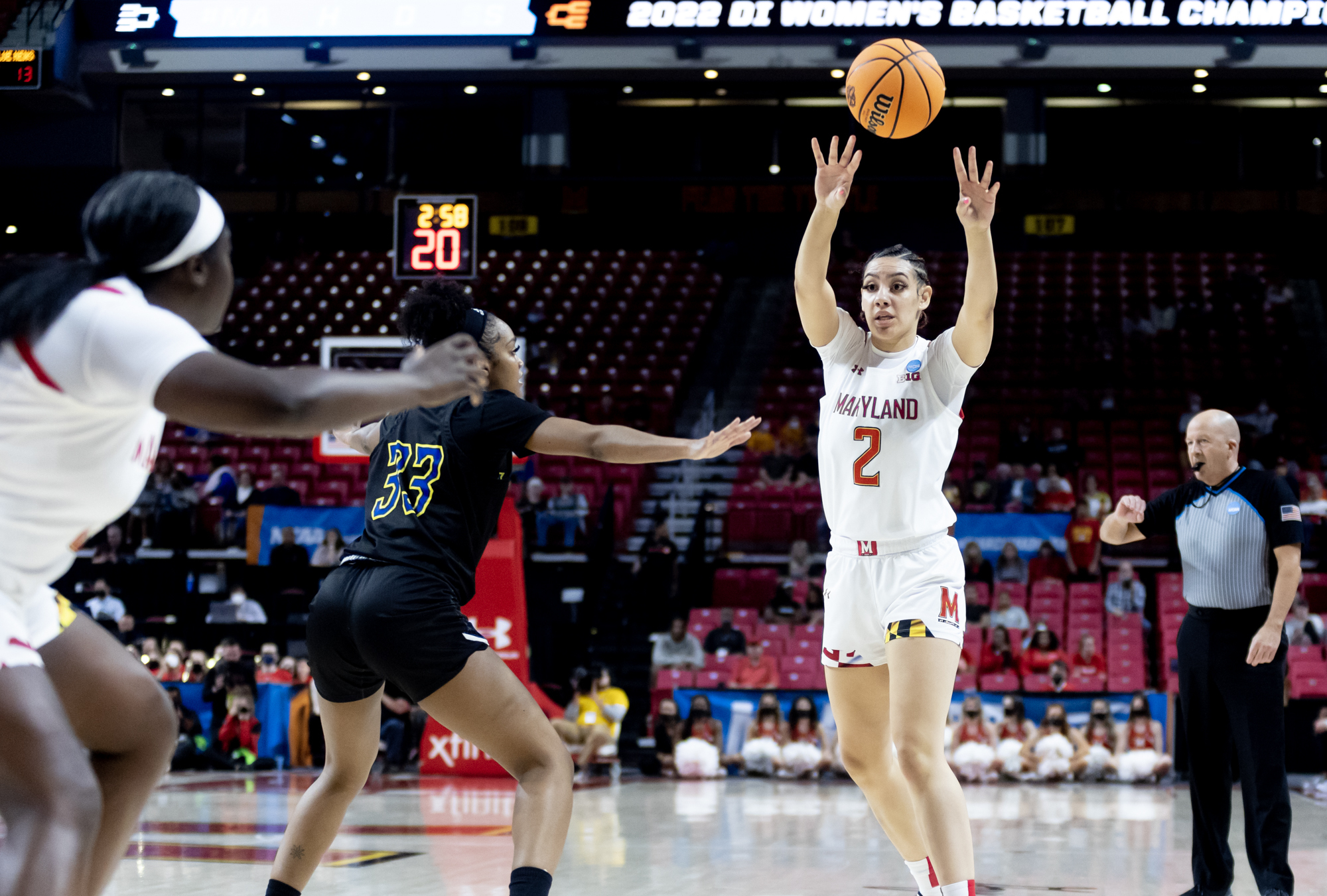 In the first half, all Maryland women’s basketball did was throw pristine passes.

Shyanne Sellers did so in the second quarter, guiding her dribble behind her and turning the motion into a slick behind-the-back feed in transition for an open Diamond Miller layup.

Before that, it was Angel Reese’s turn. The sophomore came down the court before chucking a right-handed pass backward to Miller for an easy two.

After a disappointing Big Ten tournament loss where their offense stagnated due to a lack of ball movement, the Terps finished with 19 assists. They moved the ball and erupted for 102 points in Friday evening’s 31-point victory over Delaware in the first round of the NCAA tournament.

“Sitting on the last two weeks, we were more than prepared and more than ready to come out with such a competitive group,” coach Brenda Frese said. “Things opened up inside-out, being able to kick for threes and really just sharing the basketball.”

Maryland made quite a few flashy passes on Friday, but also executed the simple ones.

Whether it was Ashley Owusu finding Katie Benzan running off a screen for an open three to kick off the third quarter, or Miller running a side pick-and-pop before hitting Chloe Bibby in the corner for a three, the Terps consistently made the right pass when it was open to them.

[Maryland women’s basketball breezes by Delaware in first round of NCAA tournament, 102-71]

Maryland’s 19 assists were the most it has had in a game since late January. Each of the 19 assists helped the Terps’ offense sing in a way that it hasn’t for most of this campaign. They shot a season-high 59.4 percent from the field and scored triple digits for just the third time this year.

The Terps had that trademark offensive balance that coach Brenda Frese covets, with five players scoring double-digits. Four of the five starters finished with above 15 points, including a combined 62-point performance from Owusu, Miller, and Angel Reese.

“That’s what it looks like, what Maryland basketball looks like,” Frese said. “And you can see the results that they had where everybody is getting touches and sharing the basketball, we’re able to show our offensive arsenal.”

The Terps made ten threes in the game, eight of which came from the senior transfer combination of Katie Benzan and Chloe Bibby. A game after the pair were shutout from behind the arc, they had no such issues against the Blue Hens.

Benzan didn’t attempt a 3-pointer until late in the fourth quarter during the Big Ten tournament loss to Indiana. She seemed determined not to replicate that against Delaware and launched her first long-range attempt just over a minute into the game.

While she missed that shot, it set the tone for her aggressive play. She found her form and finished 5-of-7 from three, including one bombastic make from well behind the arc.

“In the Big Ten when you play people multiple times, the scouting report is out, so playing Delaware the first time, that’s a little bit different,” Benzan said. “Just reading what the defense gave me, my teammates found me when I was open and the ball went in. “

Save for the bellowing supporters in the Xfinity Center, the Terps’ first-round win and offensive performance looked like one from last season, where a balanced offense picked apart a hapless defense from every part of the court.

“Definitely felt similar [to last year]… first, we got to 100 points, which is really fun,” Benzan said. “Everybody was scoring and sharing the basketball and that’s how we pride ourselves playing Maryland basketball, that’s just a fun way to play.”