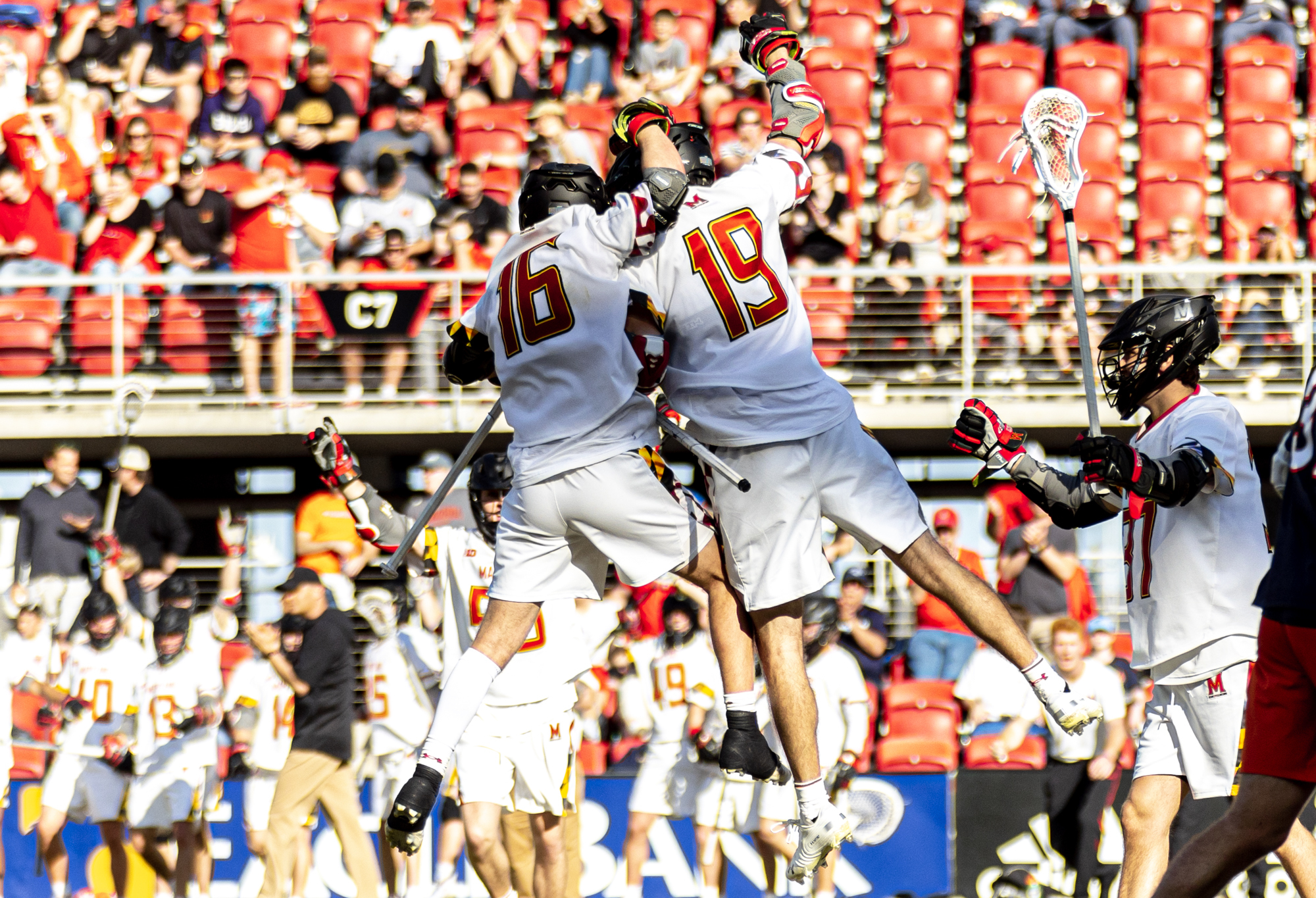 Keegan Khan and Anthony DeMaio celebrate during Maryland men's lacrosse's 23-12 win over No. 2 Virginia at Audi Field on March 19, 2022. (Julia Nikhinson/ The Diamondback)

Penn State was able to keep the game close early on, but Maryland men’s lacrosse erupted halfway through the second quarter.

The Terps went on a 13-0 scoring run and held the Nittany Lions scoreless for over 23 minutes as they cruised to a 18-7 victory in their opening game of Big Ten play.

The victory retains No. 1 Maryland’s status as the only undefeated team in the country at 8-0, with the triumph being the Terps’ third-straight win by double digits.

After a huge 23-12 victory over Virginia last week, coach John Tillman was wary of a poor performance in Maryland’s first Big Ten game of the season against a Penn State team that upset No. 5 Yale at home earlier this season.

However, Tillman said the maturity of his team was key as the Terps secured another big victory.

“We were really guarding them against the letdown after last week,” Tillman said. “But man, our leadership was terrific today and it was all week.”

Jack Koras opened the scoring after cutting to the net and receiving a pass from Logan Wisnauskas.

Keegan Khan wrapped around from behind the goal and got on the board before back-to-back Kyle Long scores extended Maryland’s lead to 4-0 with just under four minutes remaining in the first quarter.

A failed clear gifted Penn State its opening goal of the game, as Logan McNaney was beaten for the first time from a close-range Will Peden shot.

[Maryland men’s lacrosse can’t get title game back, but it made a statement against Virginia]

Jack Brennan opened the second quarter with a goal before two straight from Mark Sickler and Peden cut the Terps’ lead to two.

Maryland responded instantly and exploded by going on a six-goal run to end the half.

Khan scored his second goal of the day before Luke Wierman scooped up a faceoff and went straight down the field, firing a bouncing shot past Aleric Fyock to restore the Terps’ four-goal lead.

Khan once again wrapped around from behind the net before spinning and finding the back of his net and scoring his hat trick.

Another one-two punch of goals from Bubba Fairman and Khan just nine seconds apart was followed by Long grabbing a hat-trick of his own to make it 11-3 heading into the half.

Wierman and the wings dominated in the first half, winning 14 of 16 faceoffs in the opening 30 minutes to give the Terps plenty of possession.

Wierman credited Maryland’s success at the faceoff X to the team’s preparation throughout the week. Gavin Tygh and Wierman combined to win 21 of 29 faceoffs during the game.

“We got guys on the scout [team] that do great jobs on the wings and we knew they were gonna be crashing us and giving us a hard time and those guys just all week did a great job,” Wierman said.

Maryland carried its momentum into the second half, which Wisnauskas opened up the second half with his first goal of the day, getting to the face of the net and slotting a shot past Jack Fracyon.

[No. 1 Maryland men’s lacrosse thrashes No. 2 Virginia in championship rematch, 23-12]

Koras scored his second goal of the day on another cut to the front of the goal, with Khan notching his first assist of the night that extended Maryland’s lead to double digits.

Anthony DeMaio, Jonathan Donville and Eric Malever all notched their first goals of the game in the third quarter.

Malever followed up his first goal of the day with two more in succession to notch his hat trick, giving the Terps a commanding 18-3 advantage at the end of the third quarter.

The Terps just kept scoring on a 13-0 run that gave them command of the game, which Wierman credited to the team’s togetherness.

“We were just really excited for each other,” Wierman said. “Getting that momentum and just carrying it over into each play is huge and the guys on the bench do a great job of getting excited for us.”

Mac Costin ended a Nittany Lions scoring drought that lasted over 23 minutes with a shot that crept past Maryland’s backup goalkeeper Drew Morris.

Nils Barry and Grant Haus added back-to-back goals to cut the Terps’ lead to 12 early in the fourth quarter.

Barry added another goal to make it 18-7 — the final goal of the game — as Maryland notched its eighth straight victory.

McNaney and Morris combined for 14 saves, and dominance on both sides of the ball allowed the Terps to run away with their first conference victory of the season.