No. 1 Maryland men’s lacrosse thrashes No. 2 Virginia in championship rematch, 23-12 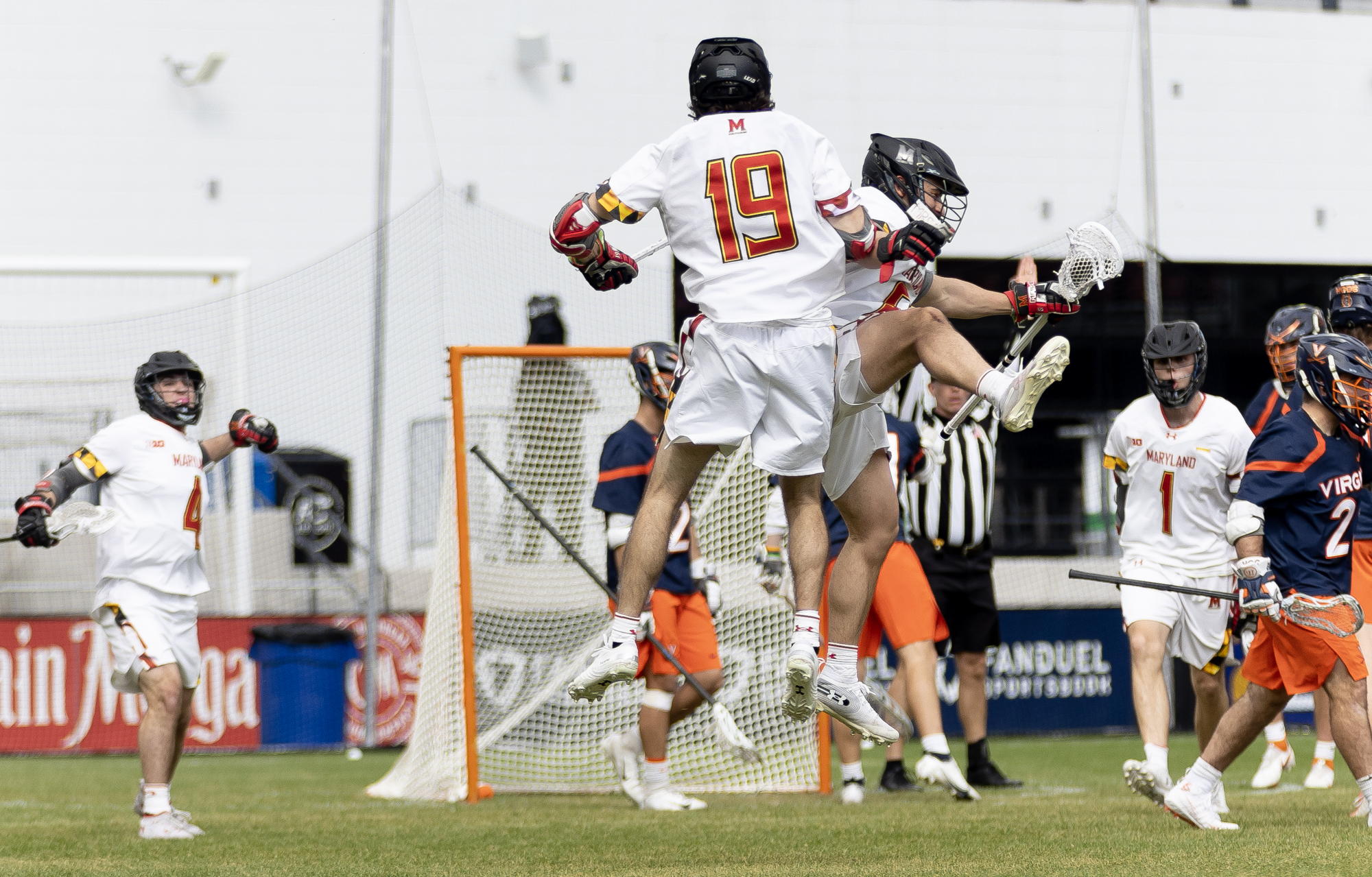 Keegan Khan celebrates a goal with his teammates during No. 1 Maryland men's lacrosse's 23-12 win over No. 2 Virginia at Audi Field on March 19, 2022. (Julia Nikhinson/ The Diamondback)

The Terps’ sideline went wild and celebrated by running away with the game easily in the final quarter.

No. 1 Maryland looked dominant in a 23-12 win over No. 2-ranked Virginia at Audi Field Saturday, part of the Capitol Classic tournament. In doing so, the Terps gained their win back after falling to the Cavaliers in the 2021 national title game.

“There’s no question who the No. 1 team in the country is right now,” Virginia coach Lars Tiffany said.

Anthony DeMaio attributed Maryland’s variety of scorers to the team’s willingness to move on and off the ball. The Terps have had 22 different players score this season.

“I think it’s a credit to our unselfishness,” DeMaio said. “Everyone on our offense, we all just play together. Move off the ball when you don’t have it, when you have it, everyone’s looking for each other, keeping the ball moving.”

Luke Wierman scooped up the opening faceoff and darted downfield before finding Keegan Khan, who spun and found the back of the net just eight seconds into the game.

Jack Koras doubled Maryland’s lead minutes later, cutting to the front of the net and receiving a pass from Owen Murphy that he slotted past the Cavaliers’ goalkeeper, Matthew Nunes.

[No. 1 Maryland men’s lacrosse and No. 2 Virginia ready to meet in national title rematch]

Matt Moore cut the Terps’ advantage to one with just over five minutes remaining in the first quarter after picking up a ground ball and finishing past Logan McNaney.

Moore found his second goal of the game to cap off the first quarter and slim Maryland’s edge to two.

Goals from Anthony DeMaio and Eric Malever were canceled out by goals from Shellenberger and Xander Dickson before the Terps took advantage of a long Virginia scoring drought.

Maryland scored four consecutive goals to grow its lead to six, including Makar’s first finish of his career and Logan Wisnauskas’ first goal of the game.

Dickson ended an almost 10-minute scoreless run for Virginia, before a Wisnauskas snipe into the top corner restored the Terps’ six-goal lead at halftime.

Wierman’s faceoff success and a great defensive effort against the second-best offensive team in the country contributed to Maryland’s 12-6 lead at the break.

Griffin Schutz opened the second half up with a goal for Virginia before a 3-0 run for the Terps — which included Murphy and Khan both bagging their hat tricks — extended Maryland’s lead to eight.

Goals from Payton Cormier and Moore towards the end of the third quarter spurred a four-goal Virginia run while the Terps entered a scoring drought of their own.

Maryland’s drought lasted just over 11 minutes before it was broken by Roman Puglise, who’s crucial goal spurred an incredible 8-1 run to finish out the game for the Terps.

Tillman said that Puglise’s goal was a turning point to end the Cavaliers’ run, and that the Terps did well to deal with Virginia’s extra pressure down the stretch to extend their lead.

“I think Roman [Puglise’s] one was big, kind of got us going,” Tillman said. “I thought these guys handled a lot of the slides and the pressure and just shared the ball and shared the ball, and then when they got opportunities they canned them.”

Matt Rahill launched a shot from past midfield that caught Nunes out of his goal and found the back of the net before Khan bagged his fourth goal of the game on a man-up opportunity.

Wisnauskas grabbed his hat trick on the doorstep of the goal as five different Terps scored to help Maryland run away with the game late.

Wierman won 24 of 36 faceoffs on the day, and his success allowed the Terps to develop momentum and go on multiple runs that helped Maryland keep a healthy lead throughout the game.

“It all started in the middle of the field with Luke Wierman, what he did, [and] the wing guys,” Tillman said. “Really getting those extra possessions allowed us to get in the rhythm.”

The 23 goals were the most the Terps have scored against Virginia since 1976, as Maryland topped the Cavaliers for the first time since 2014.

With the victory over previously undefeated Virginia, the Terps remain as one of three teams in the country with a perfect record.


After last year’s loss against the Cavaliers in the national championship, Maryland will savor the victory. However, DeMaio is focused on the future as the Terps get into their Big Ten schedule next week at Penn State.

“Definitely a lot of guys, it meant a lot to,” DeMaio said. “I think we showed that today with the heart we played with all game… but it’s not about being the best in March, you got to be the best down the stretch in May.”