Maryland men’s lacrosse can’t get title game back, but it made a statement against Virginia 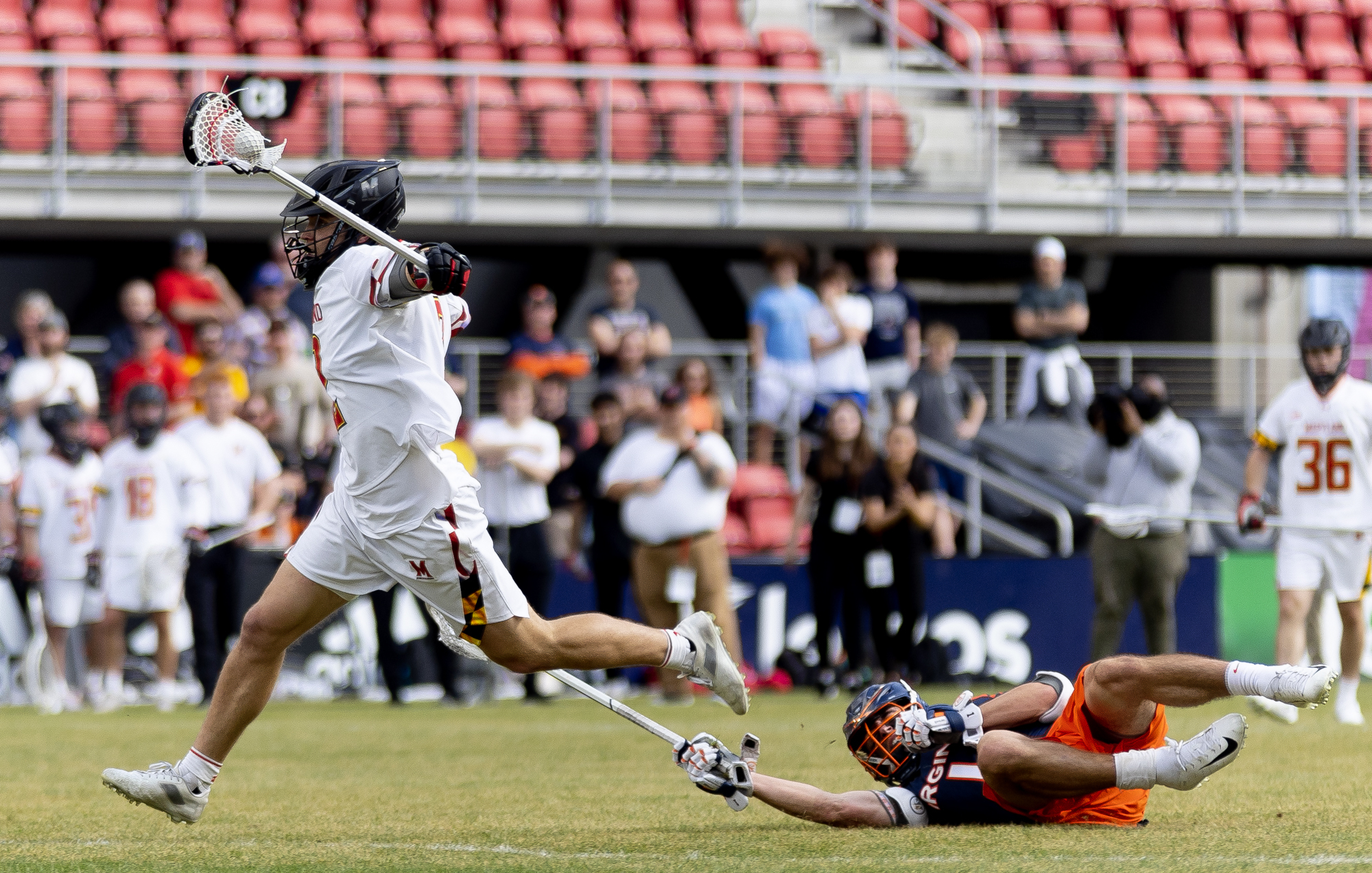 WASHINGTON, D.C. — In the 2021 National Championship game, Maryland men’s lacrosse had 11 seconds to extend its season. Luke Wierman won the final faceoff of the title game, ran downfield and sent a shot that hit Virginia’s keeper in the ribs.

The clock read all zeroes and the Terps failed to win the national championship despite a perfect season up to that point. Maryland played from behind for almost the entire game, but in the end it came down to the final moments.

When the time came to face the only team to beat it in the last two years again, the Terps didn’t give the Cavaliers the same luxury.

It only took eight seconds from the opening whistle for Wierman to win the faceoff, dish a ball to Keegan Khan and find the back of the net.

In the inaugural Capitol Classic Lacrosse Tournament, No. 1 Maryland displayed a commanding performance, earning the lead in the first seconds and never relinquishing and rarely relenting en route to a 23-12 win over No. 2 Virginia.

“They’re a great team, everyone knows that,” Anthony DeMaio said of the Cavaliers. “Our stress all week was that it was just another game.”

Although seldom spoken, the catharsis of beating the defending national champions could be felt.

Coach John Tillman and his Terp squad made it clear during preparation for the matchup — that would undoubtedly show who was the best in the nation at this point in the season — the focus was just on staying competitive and getting a victory.

But the onus of facing Virginia was always a factor.

“They know who they lost to,” Tillman said.

[No. 1 Maryland men’s lacrosse thrashes No. 2 Virginia in championship rematch, 23-12]

Maryland’s offensive explosion eased any early worries of falling behind like it did in the second quarter of the title match. A championship rematch not even a year in the books can bring excitement, but it can also bring rage and messy play.

“Even today, I was worried that..we would just take the first shot,” Tillman said. “We needed to be disciplined, we needed to execute, manage our emotions.”

It was a very different first half for Maryland than in 2021. The Terps only trailed by two at the half, but it was the Cavaliers firmly in control of the pace of the game.

But Maryland owned the tempo at Audi Field on Saturday.

The Terps showed little recognition of their previous loss on the field, but Tillman spoke postgame about how the memory stays with him.

“With 16 teams or so getting in the tournament, there’s only one happy team,” Tillman said. “You’re ending each year with a loss and it hurts. It hurts in the first round and I think sometimes the farther you get the more it hurts.”

Maryland had quite the run to reach the national championship in 2021, looking nearly unstoppable. The 2022 Terps look much the same through seven games, but the chance at winning a title with last season’s squad is far gone.

“We’re never getting that back. That was the balance this week was…Jared [Bernhardt]’s not here, Nick [Grill]’s not here and all the other seniors aren’t here,” Tillman said. “If we win on Saturday, it’s still not coming back.”

The reigning Tewaaraton Award winner and the Big Ten Defensive Player of the Year didn’t take the field for the Terps. But without them, the result went right for Maryland this time around.

Even as Virginia began to claw its way back into the game in the late third and early fourth period, Maryland found its response. Four straight Cavalier goals accompanied by an 11-plus minute scoring drought from the Terps allowed the gap to close to as little as four.

However, a rare goal from Roman Puglise in transition thwarted the run. The next score came from an even rarer stick — Matt Rahill.

The fifth-year scored his fourth career goal on a rocket from well behind midfield.

“Those were daggers,” Virginia head coach Lars Tiffany said. “Those were big momentum plays right there.”

Maryland didn’t dare slow down after.

Although the Cavaliers managed to slot one more goal playing with a man up, the Terps scored five goals in the final six minutes to drop 23 goals on the day against a defense that averages allowing just 10 per game.

Maryland made a statement that it is unquestionably the best in the country — for the time being.

But the Terps will be first to point out that there is plenty of season left to play. And the end of last season is not going away any time soon.