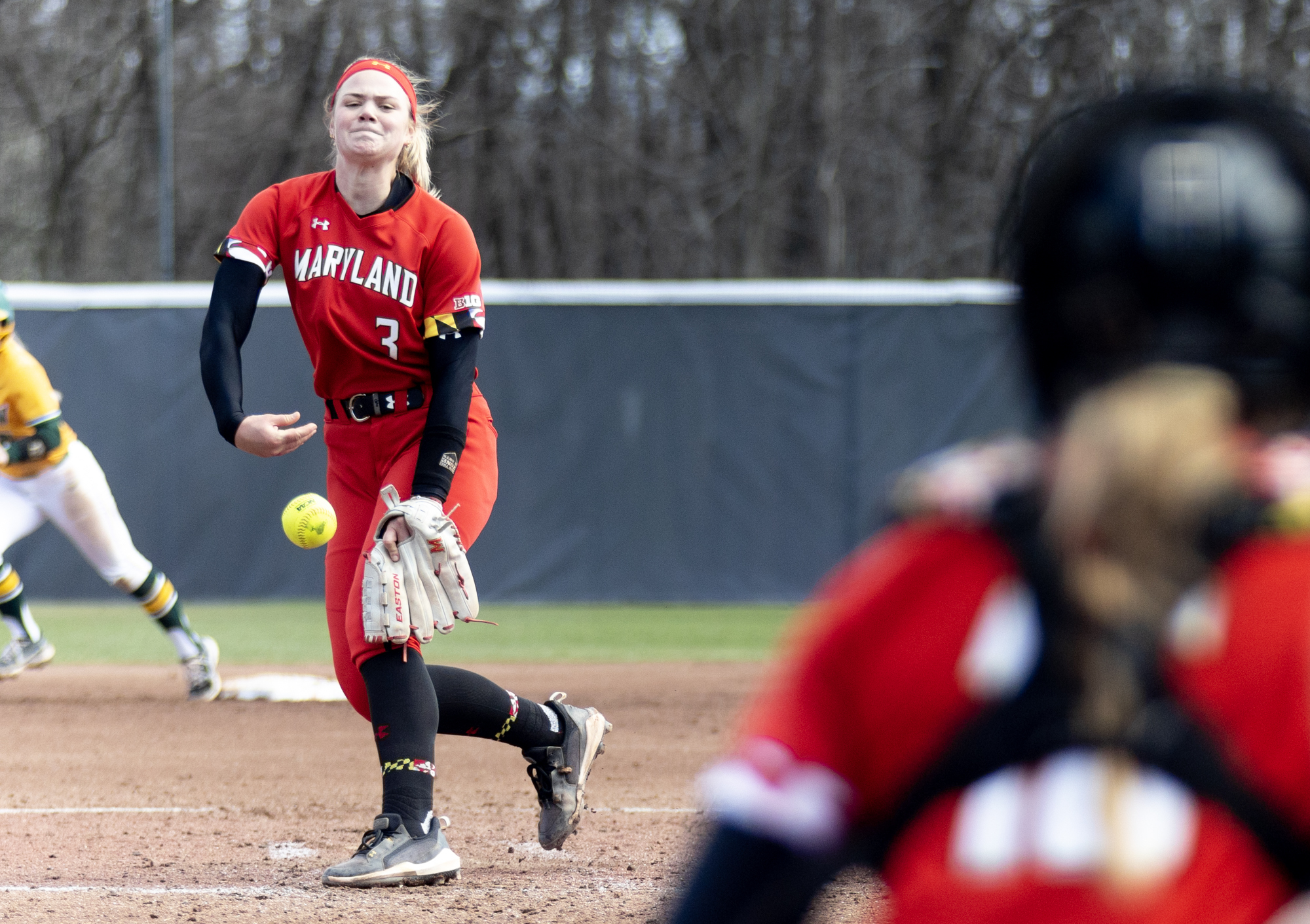 With two outs in the final inning of a 6-4 ball game, Trinity Schlotterbeck fielded the last out herself. Her throw to first base beat out Ally Kurland and put the finishing touches on a stellar outing.

As she greeted her teammates, Schlotterbeck’s four-plus innings of strong work closed out a series win for Maryland softball. The Terps beat Penn State in the rubber game, 6-4, to take their first conference series of the season.

Coming in relief of Haley Ellefson in the third inning with two outs, Schlotterbeck threw a wild pitch to allow a runner to score and tie the game at four. But her defense stepped up and got her out of the inning.

Schlotterbeck would settle down in the bottom of the fourth with a one-two-three inning and would repeat the same in the fifth.

After getting a quick two outs in the sixth, Schlotterbeck found herself in a jam after giving up a double to Liana Jones. She struck out Melody Coombs to end the threat and keep Maryland’s 6-4 lead intact.

She struck out Claire Swedberg and got an easy fly out. After a battle with Kurland, Schlotterbeck got the groundout she needed to close the game out for Maryland

After Penn State made it 2-0 early on a two-run homer, Megan Mikami got the Terps’ offense going in the third inning.

A single from Mikami allowed her to advance to third on a steal and throwing error by catcher Cassie Lindmark. Mackense Greico drove her in with an RBI-double that cut the lead in half. Halley Ellefson’s RBI-double tied the game up shortly after.

With runners on the corners, Maryland pulled off a double steal with Ellefson, beating the throw home to give the Terps a lead, 3-2. The Terps would add one more in the inning on a Michaela Jones RBI-single to cap off a four-run inning.

In the fourth frame, with Kiley Goff on first base base, Mikami signaled to right field. But thanks to an error by the Nittany Lions, Goff was able to come around and score to extend the Terps’ lead.

Greico’s RBI-single to left field would make it 6-4. That was all the run support Schlotterbeck needed as she came in shortly after to control the tempo of the remainder of the matchup.

Penn State would answer with two runs in the bottom half but thanks to enough offense, some gifts from the Nittany Lions’ defense and Schlotterbeck’s outing Maryland got leave Happy Valley with some momentum as it Big Ten schedule picks up.