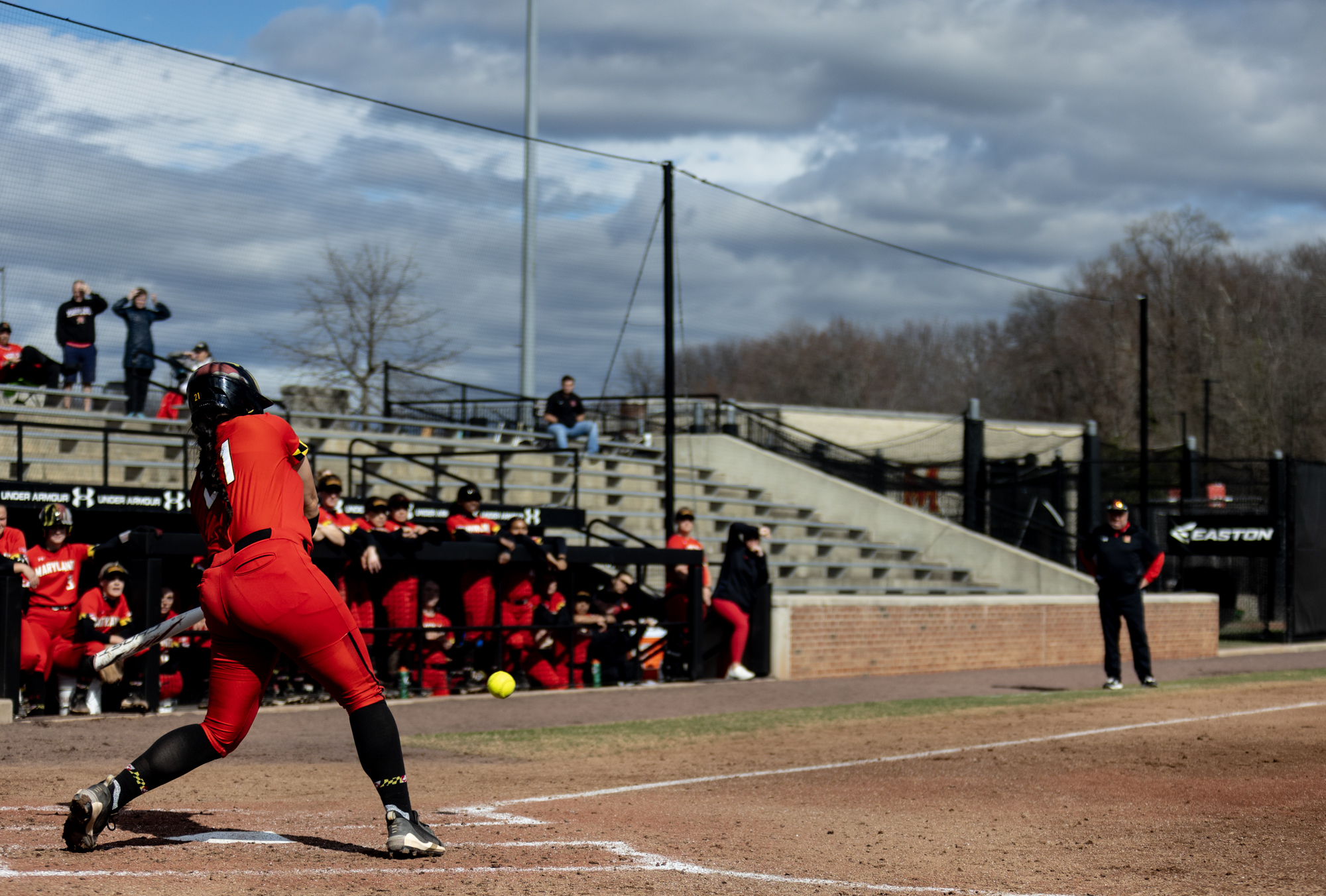 Maryland softball resumed game one of its series with Penn State on Friday as the contest was suspended due to rain the day before.

The Nittany Lions came to bat in the tenth in a tie game, 1-1.

Melody Coombs crushed a walk-off home run over the wall in left field. Penn State defeated Maryland over 24 hours after the game originally started with another game still to play only 30 minutes later.

The Terps downed the Nittany Lions in their second game of the day. After a defensive battle in the first match, coach Mark Montgomery’s squad came out swinging to seal an 8-3 victory.

Maryland opened its conference slate against Penn State in the first of a three-game series Thursday evening.

Bailey Parshall started in the circle for the Nittany Lions — the senior has dominated as her squad’s ace this season.

Parshall entered the match with the Terps at 11-3 in over 100 innings of work, with a 1.40 ERA and 0.74 WHIP. Additionally, Parshall ranked in the top-25 among all Division I pitchers in strikeout-to-walk ratio, averaging over eight strikeouts for every walk thrown.

Parshall’s opposition in the circle for Maryland was Trinity Schlotterbeck. Schlotterbeck has been the workhouse of the Terps’ pitching staff, leading Maryland in appearances and innings pitched.

Both Parshall and Schlotterbeck started the game at their best. Each starter struck out four through three innings, and entering the fourth, both offenses mustered only one hit.

The pitchers’ duel remained scoreless after five innings. Only six batters reached base before the sixth inning, and none got further than second base.

After Michaela Jones grounded out to start the top of the sixth frame, the game was delayed due to rain in the area at Beard Field.

The contest was suspended and picked up on Friday afternoon, before game two of the series.

Both starters returned in the circle for the resumption of the contest.

Penn State scored the first run of the game after Maryland was unable to score in the top of the sixth inning.

Coombs led off the inning with a single and remained at first following back-to-back flyouts. Coombs stole second to put herself in scoring position for Lauren Marcotte.

After the first two Terps were retired to start the top of the seventh, Taylor Okada singled to keep the game alive. Schlotterbeck came to bat and roped a two-strike double over the head of Maggie Finnegan in right to score Okada from first. After being down to its last strike, Maryland tied the game at one apiece.

The teams went scoreless again until the tenth.

Coombs laced a walk-off solo home run to end game one of the series.

Maryland scored first in game two just under an hour after its extra innings defeat.

After a scoreless first two frames, Mackense Greico put the Terps on the scoreboard with a solo blast over the wall in center field in the top of the third for her team-leading fourth long ball of the season.

Neither team scored the next two innings as the pitchers took control. Vanessa Oatley allowed just three hits and one run through five innings. Courtney Wyche struck out five and only three Nittany Lions reached base entering the sixth inning.

Maryland extended its lead in the top of the sixth frame.

Regan Kerr — pinch-hitting for Jones — drilled a double that one-hopped the wall in right field, scoring Haley Ellefson and Kamryn Davis. Campbell Kline followed with a single to left center to score Kerr, putting Maryland ahead, 4-0.

Later in the inning, RBI singles from Jaeda McFarland and Megan Mikami added on to the Terps’ large run total in the sixth.

Maryland added two more runs in the sixth inning thanks to a sac-fly off the bat of Merissa Borkowski and a misplayed fly ball by Liana Jones in left that scored Mikami.

The Terps scored seven runs in the sixth frame and led, 8-0, entering the bottom half of the inning.

In the bottom of the sixth, Ally Kurland hit an opposite field home run over the wall in left to put the Nittany Lions on the scoreboard and avoid a mercy-rule defeat.

RBI doubles from Amanda Mack and Cassie Lindmark in the bottom of the seventh inning trimmed Maryland’s lead by a few runs. But Wyche didn’t allow anymore runs, clinching the victory for the Terps.