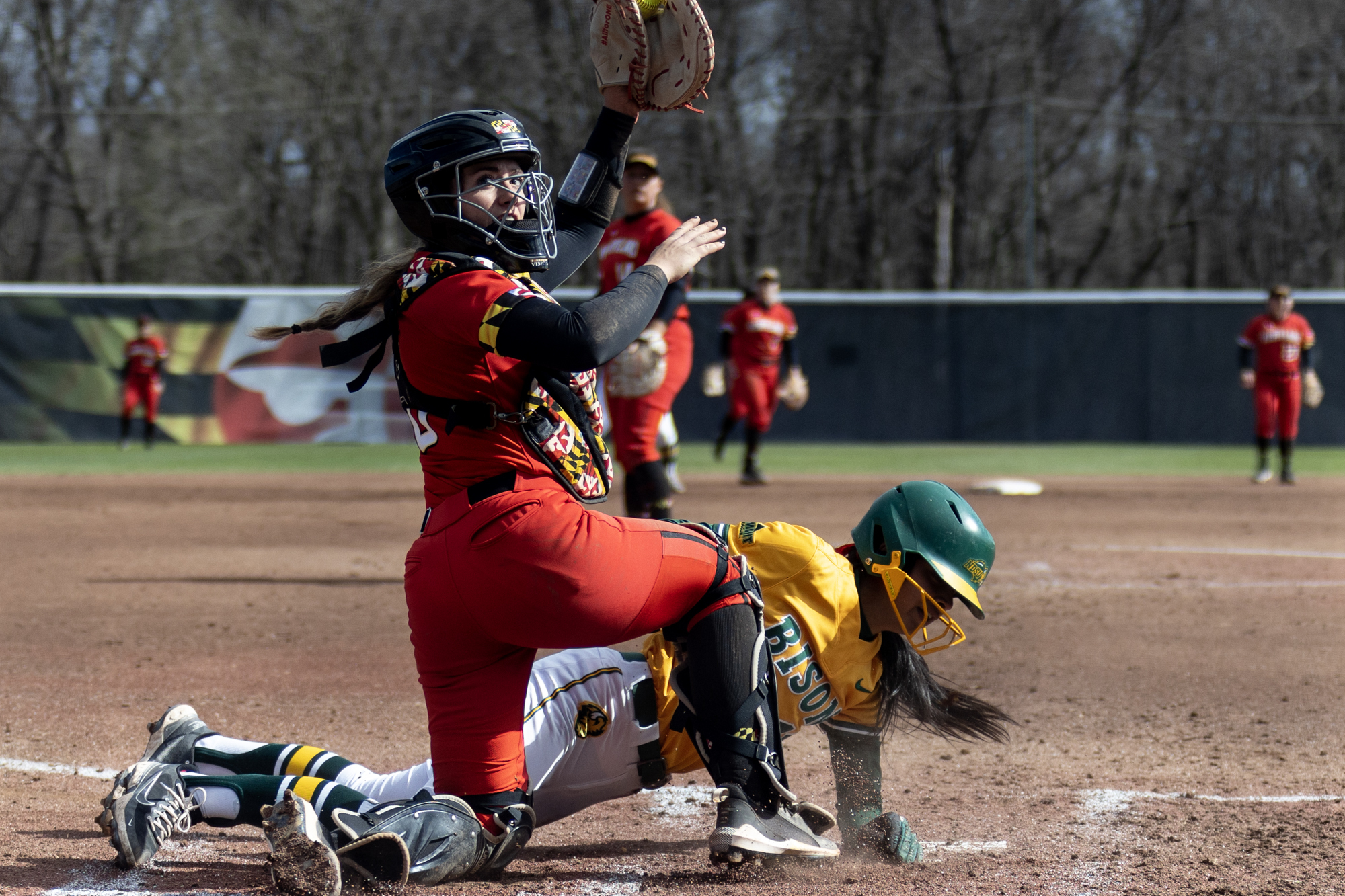 With Maryland softball up 5-3 entering the top of the seventh, Haley Ellefson — having already made her mark on the game with her bat — entered in relief, looking to close the game for the Terps.

Ellefson fired a one-two-three seventh, capping off Maryland’s weekend with a win.

The Terps faced off against North Dakota State in a Sunday morning matinee for their final game of the Capital City Classic. Ellefson got the scoring started and Maryland led throughout, downing the Bison, 5-3.

The Terps started the bottom of the second with a bang.

Ellefson crushed a solo home run over the wall in right center field for the first run of the game.

Still with no outs in the second, Ruby Butler stepped into the batter’s box with two runners on. A wild pitch moved both runners into scoring position, and Butler brought Taylor Okada home from third — thanks to the Bison defense.

Butler flew out to Emilee Buringa in centerfield, and Buringa’s throw home was off the mark. Okada trotted home as a result to extend the Terps’ lead to two.

Kiley Goff followed with an RBI single to the right, Maryland’s third run of the inning.

Michaela Jones came up to bat next. Goff stole second, allowing Jones to reach base with the help of indecision by Skylar Padgett at short.

Jones grounded one to Padgett, but Padgett was hesitant with another decision. The throw bounced off the second base bag, seeming as if she tried to stop the throw at the very last second, but couldn’t. Jones was safe at first, and Goff advanced to third without a throw.

That set up runners on the corners and coach Mark Montgomery employed the double steal.

Jones attempted a steal of second, and once Kayle Moore threw to second, Goff was off from third. North Dakota State tried to tag out Jones in a rundown, but Jones slid back to first safely.

Goff scored standing up as a result of the rundown, putting Maryland ahead 4-0.

The Bison instantly responded with a trio of runs in the following inning.

Cameryn Maykut stepped up to bat with the bases loaded and two outs in the inning. Maykut lined a single into left scoring two. Reanna Rudd followed with a groundball past Trinity Schlotterbeck on the mound, up the middle for a base hit. Dez Cardenas scored from second, trimming Maryland’s lead down to one, 4-3.

In the bottom of the fourth, the Terps extended their lead back up to two.

Butler and Goff led off the inning with singles, putting Jones in a golden position for damage. Jones crushed a ball that one-hopped the wall in centerfield, scoring Butler as the throw deflected off Moore’s glove at home.

Goff tried scoring after the ball got away from Moore, but Moore’s throw to Mac Schulz was in time and Goff was tagged out. At the end of four, Maryland led by two.

Neither side scored over the next few innings and the Terps secured the win, 5-3, after falling to the Bison on Friday.