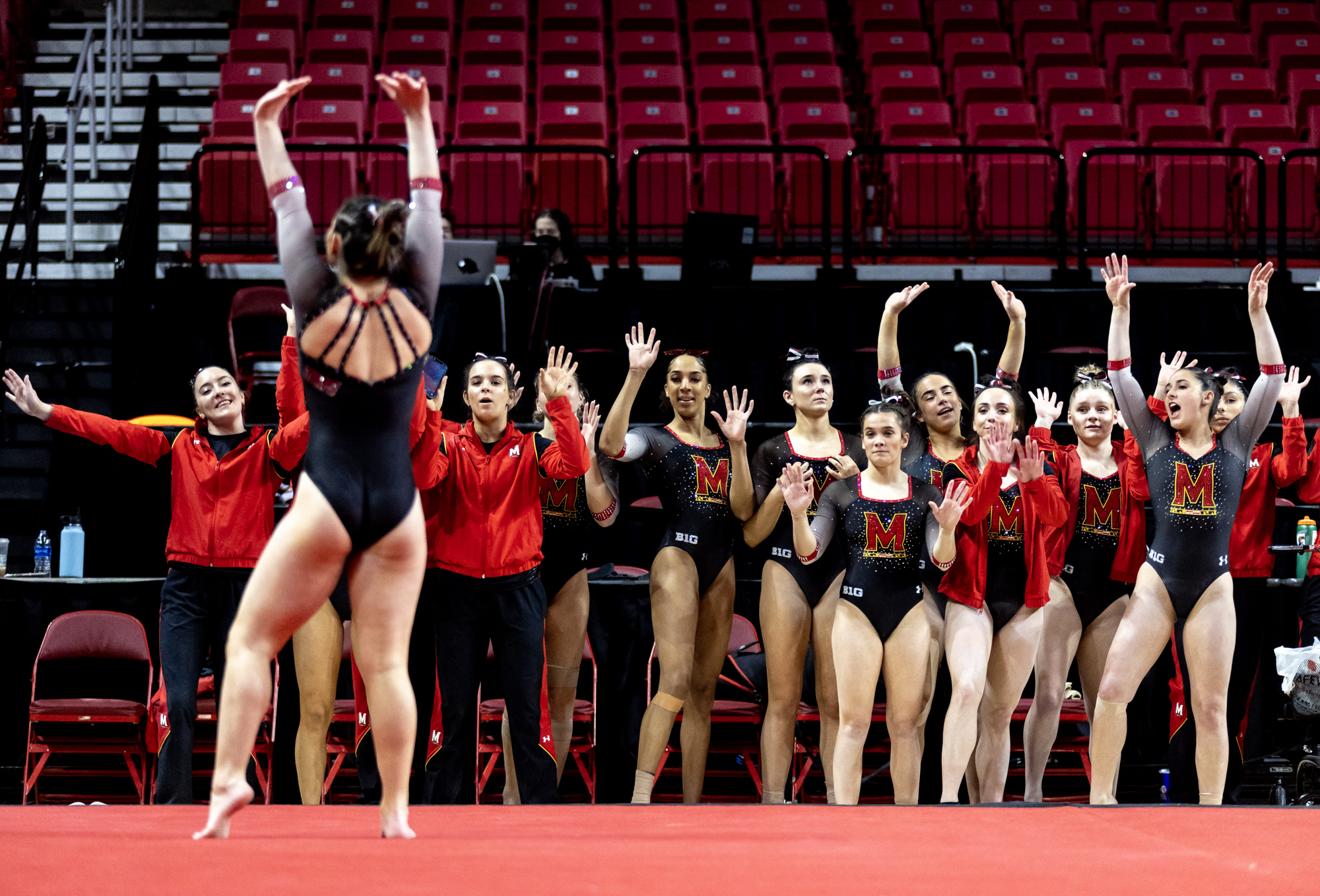 Seven Big Ten women’s gymnastics teams currently rank in the top-25. If that number remains the same when the season ends, that would be the most top-25 teams the Big Ten has had since national rankings were introduced in 1998.

Maryland gymnastics is among those seven programs and currently sits at No. 20. Still, it will compete in the afternoon session rather than the night session, where the conference’s top four teams battle to be crowned Big Ten champion on Saturday in Columbus, Ohio.

In the afternoon group, half of the teams rank in the top-25, with Illinois and Iowa joining the Terps as the favorites.

When Maryland left the ACC for the Big Ten in the summer of 2014, the decision likely had little to nothing to do with gymnastics. But for coach Brett Nelligan and his Terps, it was a promising switch that continues to prove rewarding as the conference ascends.

The ACC doesn’t have its own gymnastics conference and instead Maryland competed in the East Atlantic Gymnastics League, a gymnastics division composed of programs from several different Division I athletic conferences.

Currently, zero EAGL teams rank in the top-25, while the Big Ten’s seven is only one team shy of the SEC’s eight squads.

“We were excited to become a part of an established Power Five conference,” Nelligan said. “I think we’ve done a good job of not only showing that we belong, but we’ve tried to position ourselves ahead of this rise in the Big Ten conference.”

In Nelligan’s eyes, part of the conference’s collective rise is due to each program dedicating itself to improvement on the national landscape.

“I really think we have immensely talented coaches in this conference. All the schools are doing an excellent job recruiting talented gymnasts. And I think the Big Ten is becoming a gymnastics destination for some of the most talented gymnasts in the country,” Nelligan said.

The numbers back up that claim.

Of the top 10 All-Around individual competitors in the country, five compete in the Big Ten.

The other five are made up of three SEC gymnasts and two PAC-12 competitors, three of who competed in last summer’s Olympic games in Tokyo.

Standing just outside of that top-ten is Maryland’s own Audrey Barber.

The fifth-year senior, who is currently in position to earn Second-Team All-American honors, recently became the program’s top all-time scorer. She also tied the Maryland record for an individual meet all-around score with 39.625 in a quad-meet victory at Towson.

And with Barber being selected to her third All-Big Ten First Team, she and the Terps will have more chances to continue making history in the upcoming postseason.

“Her DNA is winning,” Nelligan said. “She just knows how to win. And when the moment is the brightest when the lights are on, she’s at her best.”

Barber also has momentum on her side.

In the Terps’ last two meets, five of Barber’s eight routines have been 9.9+’s — including back-to-back career-highs of 9.950 on floor for Maryland.

The floor group has clearly established five of the six in its rotation, rolling with Barber, Reese McClure, Tayler Osterhout, Alexa Rothenbuescher and Alexsis Rubio.

The sixth spot, though, has been in flux throughout the season.

Sophia LeBlanc competed on floor prior to suffering a season-ending injury after two meets. Her sister, Rhea LeBlanc, has also seen several appearances there.

On top of that, Josephine Kogler, Emma Silberman and Aleka Tsiknias have each seen competition on floor.

But Nelligan’s ultimate choice for this weekend is senior Sanya Glauber.

Glauber has been most successful in her career on bars, where she holds a shared-tie of the program’s top-scored routine, earning a 9.950 last season.

But after dealing with elbow surgery, bars has been the most challenging event to return to for Glauber — she’s competed only twice there this season.

However, Glauber has also seen two appearances and several exhibitions on floor. After a disappointing 8.625 in the season-opener, she didn’t see floor competition again until the last regular season meet. There, Glauber scored 9.725, and Nelligan has liked what he’s seen enough to pencil her in as the floor group’s sixth gymnast.

“She was in on the Pittsburgh meet, it didn’t go well, but she continued to train, continued to be ready for us,” Nelligan said. “And now she’s ready to go, and we have confidence in her.”

But the lineup isn’t the only thing different about the floor — its location is different, too.

For the second time this season, the Terps will be competing on podium. With an elevated set up and a hollow underneath, the bounce varies slightly, leading to minor adjustments each gymnast will have to make.

Because of that, each team is allowed a warm-up day, which the Terps will take advantage of on Friday ahead of Saturday’s meet.

Another difference of the afternoon session is that since the meet features six teams, each program will have two rotations off.

The Terps will start on floor, move to vault, then have a bye. Then, they’ll head to bars, finish on beam and sit the last rotation out.

Nelligan has been keen on the Terps using momentum to their advantage, both from a meet-to-meet standpoint and within each rotation. With a bye halfway through, as well as the pressure of postseason conference play, utilizing positive momentum could prove pivotal to the Terps’ success.

Luckily for the Terps, they’ve been on a roll. Nelligan thinks each gymnasts success has been contagious.

It’s certainly possible Nelligan is right, as there’s been an epidemic of high scores. The bars unit has seen five different gymnasts post 9.9+’s in the last two meets.

But even before their recent historic stretch, the Terps felt an explosion was on the horizon.

“This team is super special and this definitely is not our peak yet, so I’m excited,” Glauber said on March 3.

Glauber, a senior and All-Big Ten sportsmanship honoree, was proven right thanks to a barrage of recent high scores. And after hitting their peak, the Terps look to carry their momentum into Columbus as they battle in a historically talented Big Ten Championship.