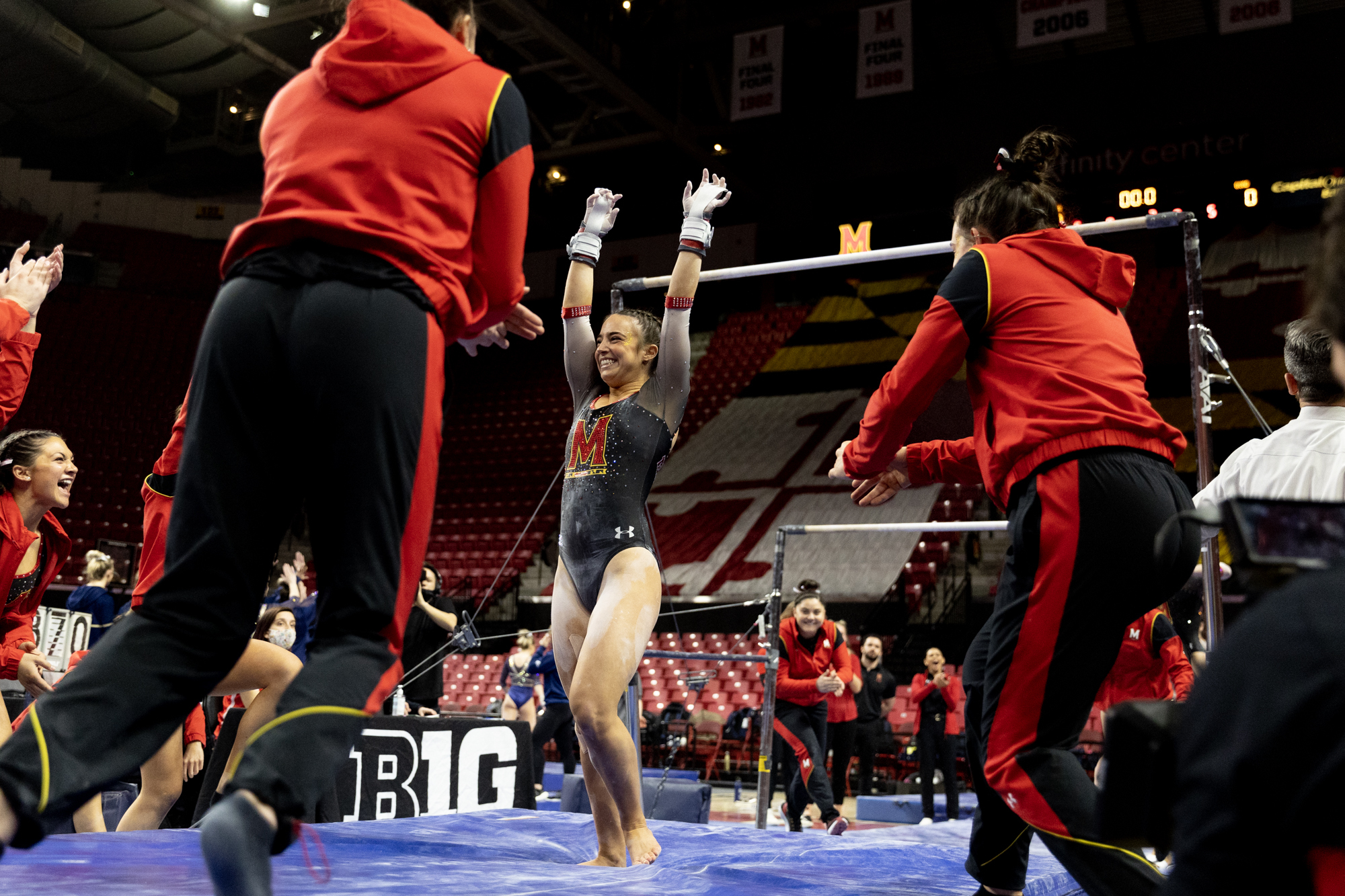 Maryland gymnastics head coach Brett Nelligan knew Maryland would have a really strong bars unit this year. But to reach the record-breaking point the group is at now, it was about his gymnasts knowing just how great their group was as well.

In the Terps’ 197.025-point quad meet victory over George Washington, Penn and Bridgeport on senior day, the unit scored 49.475 on bars with 9.9+’s from Elizabeth DeBarberie, Emma Silberman and Audrey Barber — breaking the record of 49.450 set just two days prior.

And within the bars team’s program record, there was an individual one, too. That came from Emma Silberman, who led the charge with 9.950, tying the program-high bars routine.

“’I’m so glad that I could produce that score for my team. But it just felt amazing after that routine, I’ve never felt like I’d hit a routine just like that. So it was just so exciting,” Silberman said.

But Silberman’s bars performance wasn’t the only 9.950 of the day for the Terps.

In her last career routine in Xfinity Center, Audrey Barber did exactly what has made her one of the most successful gymnasts to ever come out of College Park.

It’s uncommon for a gymnast to stick a landing on floor — but Barber did just that, making it look effortless in the process.

After sticking her last path, Barber took a deep breath and saluted a sea of Maryland faithful in the stands, who greeted the judges by imploring for a perfect score.

And while the judges didn’t give the crowd quite what they wanted, both flashed 9.95.

With that, Barber finished her regular season and Xfinity Center career in fitting fashion, posting 39.575 on the All-Around and elevating her All-Around rank to No. 11 in the country.

“Honestly, [the ending] was amazing. Last time I was in Xfinity Center, I stepped out [of bounds], so I really wanted to make an emphasis on this last routine, and last pass,” Barber said. “I was really happy when I stuck it and emotions took over that I’ve been holding back all meet.”

And although Sunday marked the last time Barber took the Xfinity Center floor, the post-season awaits. That’s where the fifth-year senior has made a name for herself on the national stage.

“I’m excited for postseason. This team has only been getting better, and I’m just excited for what we can do,” Barber said. “We’re pretty amazing right now.”

[With momentum on its side, Maryland gymnastics prepares for final regular season slate]

Within the last two weeks, the Terps have moved up 14 spots in the rankings, moving from No. 33 to No. 19 after three consecutive 197-point outings.

“I’ve been out of words for a long time with this group, because every day in the gym, and every week coming out, [they’re] competing. They’re endlessly amazing us,” Nelligan said.

Of the things that continue impressing Nelligan, the team’s collective success stands toward the top.

Proving the team effort was the bars performance not just on Sunday, but throughout the weekend. With Senior Day and Towson’s quad meet combined, five different bars gymnasts scored 9.9’s.

After its last hurrah, No. 19 Maryland boasts a program-record NQS of 196.665 — over a full point higher than what it was two weeks ago. As they enter the postseason, the Terps look to carry the momentum of their best stretch in program history with them.