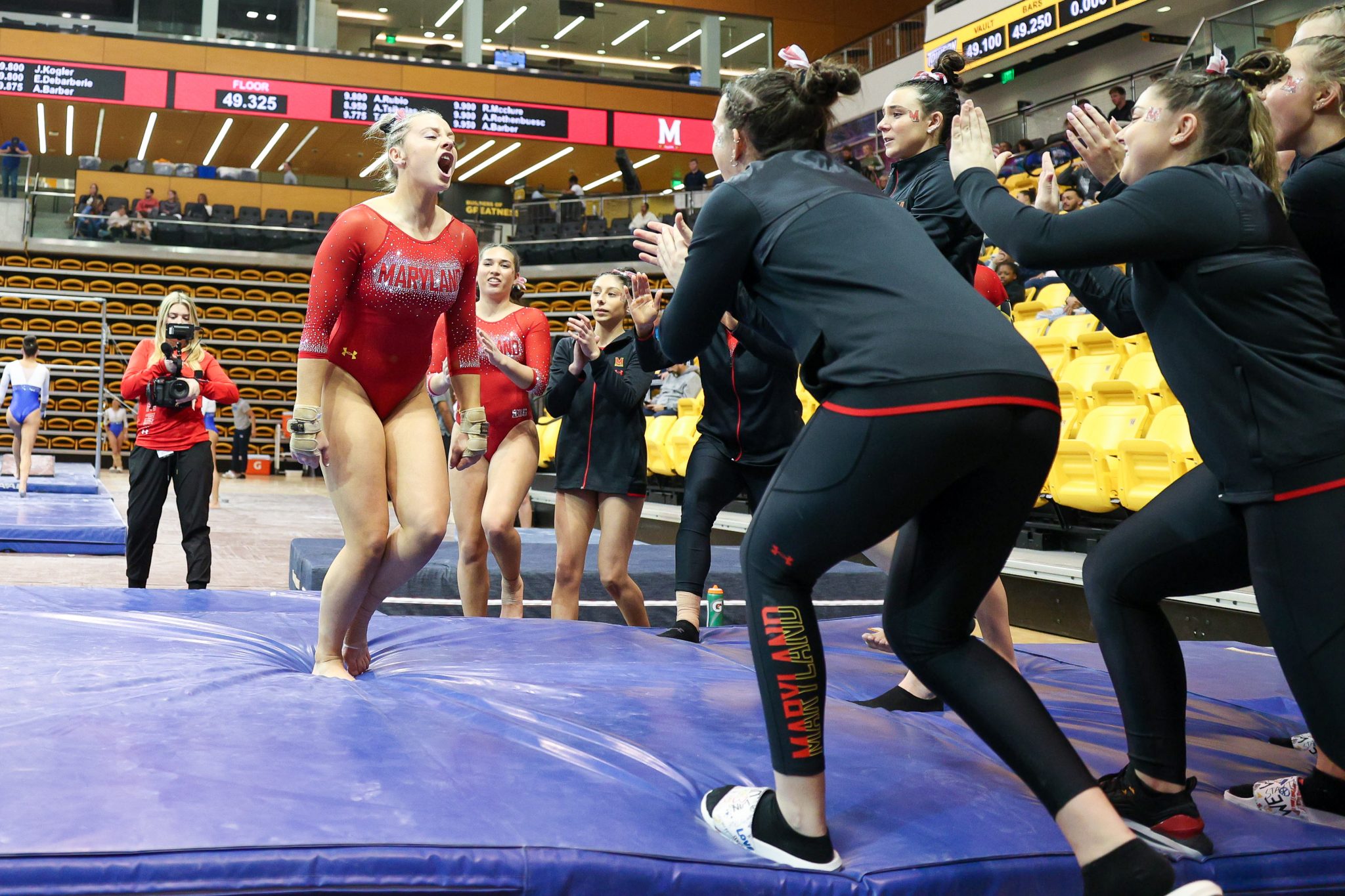 TOWSON, Md. — Maryland gymnastics started in Towson’s quad meet on its two lowest-scoring events this year — beam and floor. Coming out of those first two rotations, though, Maryland held a score of 98.500.

Headlining that was three-straight consecutive 9.9’s to end the floor rotation from Reese McClure, Alexa Rothenbuescher and a 9.950 from Audrey Barber.

And the Terps were just getting started.

The Terps finished with their second-highest score in program history and a season-high 197.175 en route to victories over Towson, George Washington and Southern Connecticut State.

“I told them in the huddle at the end for the first time in my career that I’m out of words,” Nelligan said. “I’m so proud of them. They’re so incredible, I’ve run out of ways to tell them how much I care about them… So I just kind of left it at that.”

[With momentum on its side, Maryland gymnastics prepares for final regular season slate]

Of all things to be impressed with, Nelligan, who is also the teams’ bars coach, said he couldn’t be more pleased with that group’s record-breaking performance.

The performance was started by Kondo, who has excelled as a bars specialist in her freshman season in the lead-off spot each meet.

Nelligan has honed in on not losing tenths — in Kondo’s 9.925-point routine, she had two fully vertical handstands and a stuck dismount, and as a result earned her career-high.

“It was an absolutely amazing feeling. My favorite [thing] is sticking that bars dismount. It’s just like a cherry on top of a great routine and I was glad to get the movement going for the rest of the rotation,” Kondo said.

And getting the rest of the rotation going it did.

Tsiknias tied her career-high with a 9.925, marking her third consecutive meet posting at least 9.9.

And while Tsiknias ended her night on a sweet note by continuing her dominance on bars, she didn’t get the start she was hoping for. The junior competed on floor for the first time since tearing her achilles a year ago, but struggled and scored 8.950.

“I was really proud of her, you know, she wasn’t happy with the way floor went and I told her to leave it behind. We need her on bars, we need her to put up a big number. And she delivered for us, and that’s the kind of competitor she is,” Nelligan said.

After Tsiknias came Barber, whose 9.900 on the last routine of the night gave Maryland its season-high and the shared record of the single-meet All-Around score. It’s another accolade for the highly-decorated fifth-year senior.

“I’m excited to get it and tie it, it’s definitely been a goal of mine that I’ve been shooting for ever since I started my freshman year,” Barber said.

After knocking that off her check-list in the same week that she became Maryland’s all-time leading scorer, Barber has just one regular season meet left. She will take the Xfinity Center floor for the final time on Sunday.

“Gymnastics as a whole has been my favorite thing ever. So for it to be winding down is super sad. But to have an amazing team and pull off what we did today, I’m just super excited to get back out there again,” Barber said.

And although Sunday marks the final regular season meet of the season, Nelligan and the Terps aim to do severe damage in the postseason.

“It’s incredible that this team, they continue to amaze, they have levels that I don’t even think they knew that they had,” Nelligan said. “For them to reach these numbers and these scores, these program records, it’s incredible.”