With momentum on its side, Maryland gymnastics prepares for final regular season slate 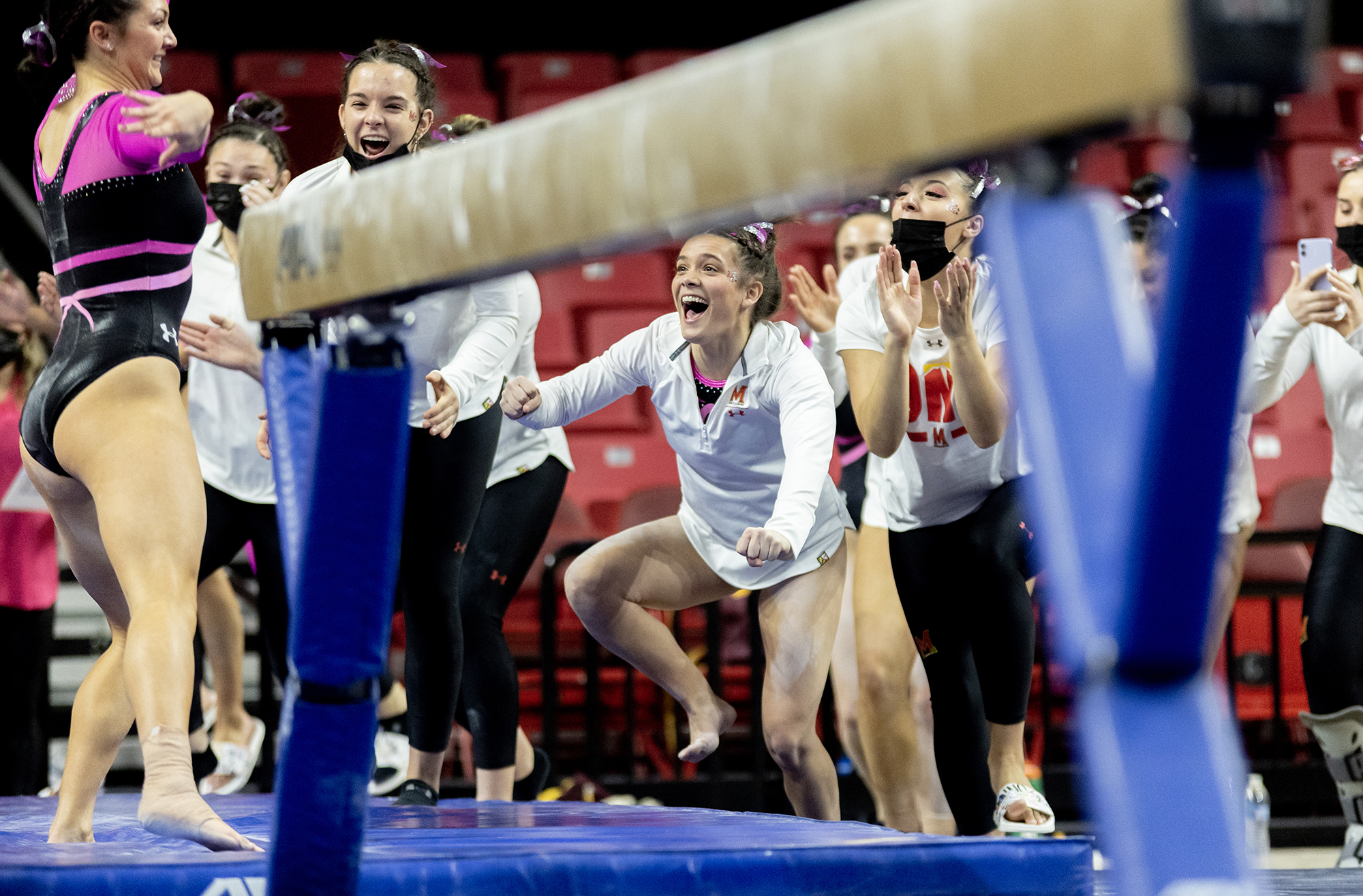 Maryland gymnastics is in the final week of the regular season with its second consecutive two-meet weekend, as the Terps travel to compete in the Towson Tri on Friday and return home for the Terp Quad on Sunday.

With the physical demand of the sport and the toll it takes on a gymnasts body, having two meets in three days at the tail-end of the season may appear daunting.

But the Terps have found their groove.

So despite all the bumps and bruises that have come along the way, Maryland still has two chances to improve its NQS of 196.210, already the highest in program history.

“When it’s go time, it’s kind of just more of like mind over matter. So I put the heel in the back of my mind and just go out there and do what I need to do,” Audrey Barber said.The fifth-year senior, who just became Maryland’s all-time leading scorer, is at the top of her game. Barber ranks No. 15 nationally in the All-Around and has put up scores above 39.400 in five of the last six meets, including her career-high of 39.575.

And while Barber has led the charge, she’s far from the only Terp at the top of her game. The Terps are entering this weekend coming off complete performances, something coach Brett Nelligan foresaw, but also longed for.

“I thought this was a complete meet for us. They did everything that we’ve been asking them to do in practice, and kind of put it all together,” Nelligan said following Maryland’s Temple Quad victory. “They’re ready to handle anything that comes their way the rest of the season.”

Nelligan has described his group as special throughout the entirety of the season — with complete performances pieced together, it’s now clear why. But despite a program-high NQS, the Terps still sit outside the top 25, ranking No. 28, albeit just a tenth of a point in their NQS behind No. 25 Illinois.

With having the advantage of two meets to improve its NQS this weekend, Maryland has a solid chance of finishing as a Top 25 team for the first time since 2013. In 2013, the No. 22 Terps finished with an NQS of 195.810. If that were their score now, they’d be ranked outside the top 40, showing the vast improvement of NCAA gymnastics in recent years.

“This year is the most talented year in NCAA gymnastics history across the country,” Nelligan said. “What an incredible product we have in NCAA women’s college gymnastics. For us to be doing so well while the talent level is so high also speaks volumes about how strong our team is.”

As most teams’ scores have risen this year, the Terps look to out-rise the rest and continue climbing the rankings, where they jumped five spots forward following last weekend’s scores.

Now, with two more chances to stay on track, Nelligan’s squad enters the weekend with loads of momentum that they hope will transition into more big scores.