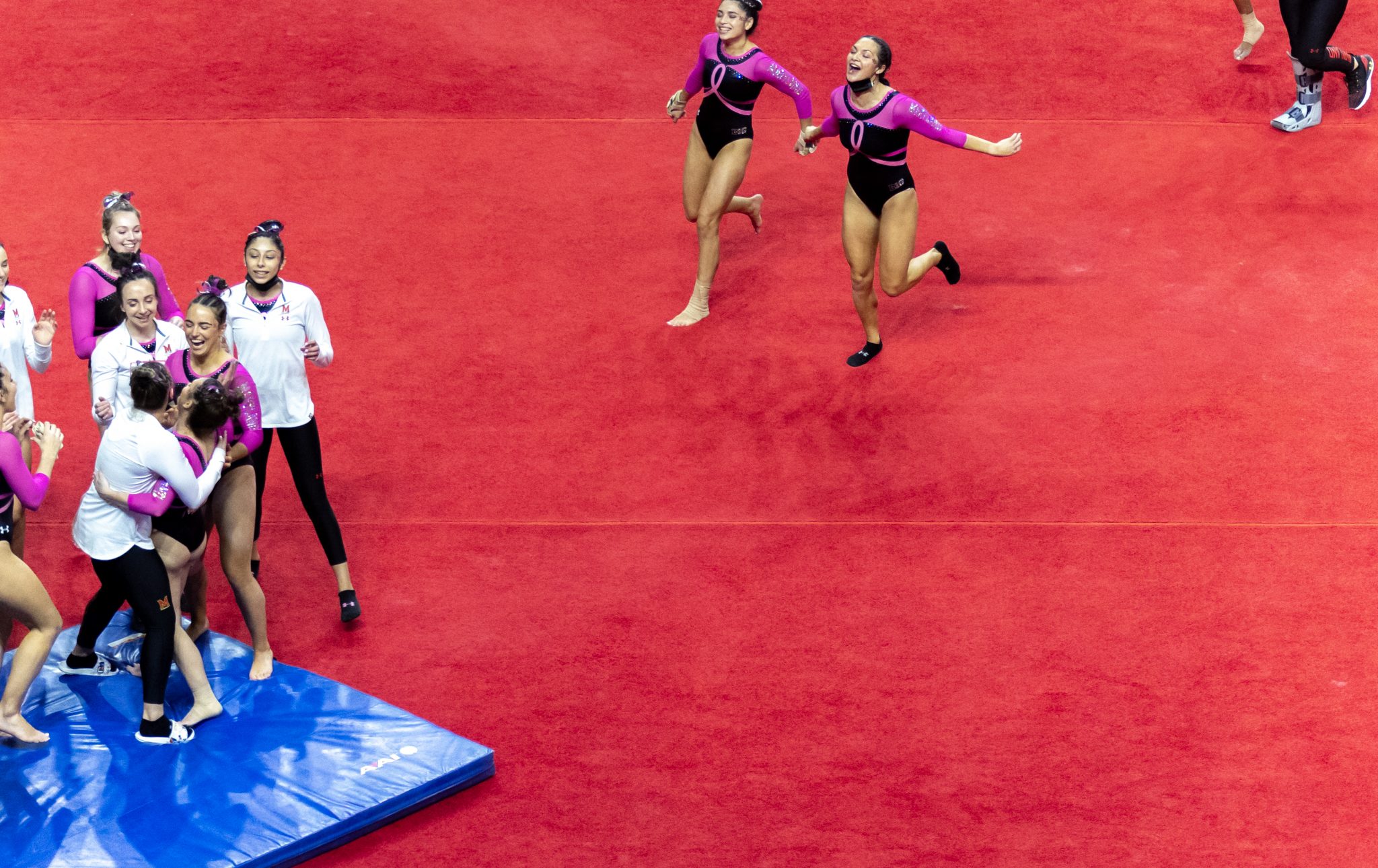 But that was far from the Terps’only feat — Maryland posted a season-high score of 197.100, which is also its third-highest in program history.

The score gave Maryland victories over NC State, Yale and William & Mary and elevated its NQS to 196.210, the first time it has ever passed the 196 mark.

The Terps’ energy was high from the start. On top of Barber clinching the scoring record, all six Maryland gymnasts scored 9.800 or above, four of which were 9.850 or above.

Rather than feel pressure to match its 49.325-point rotation, Maryland rode the wave and used the momentum to their advantage.

“When we get that momentum, that’s when we’re really hard to stop,” coach Brett Nelligan said. “We had an incredible vault rotation, we have the emotion of Audrey breaking the record and we say put the pedal down even further, we don’t want to slow them down.”

The Terps certainly didn’t slow down — even with its second bars gymnast Sanya Glauber making an awkward transition down to the lower bar to earn 9.325, Maryland kept rolling.

Nelligan often praises his team’s ability to bounce back, and for good reason. Glauber’s hiccup was followed by three consecutive stuck dismounts, and four scores ranging from 9.825-9.900.

After the 49.250-point rotation on bars, Maryland moved on to beam. Heading into the Maryland Quad, the Terps went three straight meets without scoring 49 or more.

In their record-breaking win, the Terps put up 49.375 points on beam, the highest score they’ve earned in any single-event this season.

“We see them do that every week in the gym, so I’ve been waiting and waiting for that moment where they break through. And today was the day they put it all together, they looked calm and confident out there, and the scores reflected that,” Nelligan said.

Leading the charge on beam was Reese McClure, who tied her career-high of 9.925. Despite a rough start to the season coming off of a severe ankle sprain, the former All-Big Ten selection has turned things around.

McClure also led Maryland on floor, where she put up 9.875 in her second meet back competing in her favorite event.

“It was pretty tough in the beginning of this season, like not really, being able to contribute to the team.” McClure said. “These last two meets, being able to hit like I was last year is super great and it makes it feel a lot better, and definitely raises our team to the next level.”

On floor, the Terps scored 49.150, their lowest total of the day, but it was the teams’ second-highest floor outing of the season.

Sunday’s historic victory was the second time this season where the Terps put up 49+ in each rotation. Heading into the weekend, Nelligan mentioned that he thought his team would put it all together and put up big scores — it turned out that he couldn’t have been more correct.