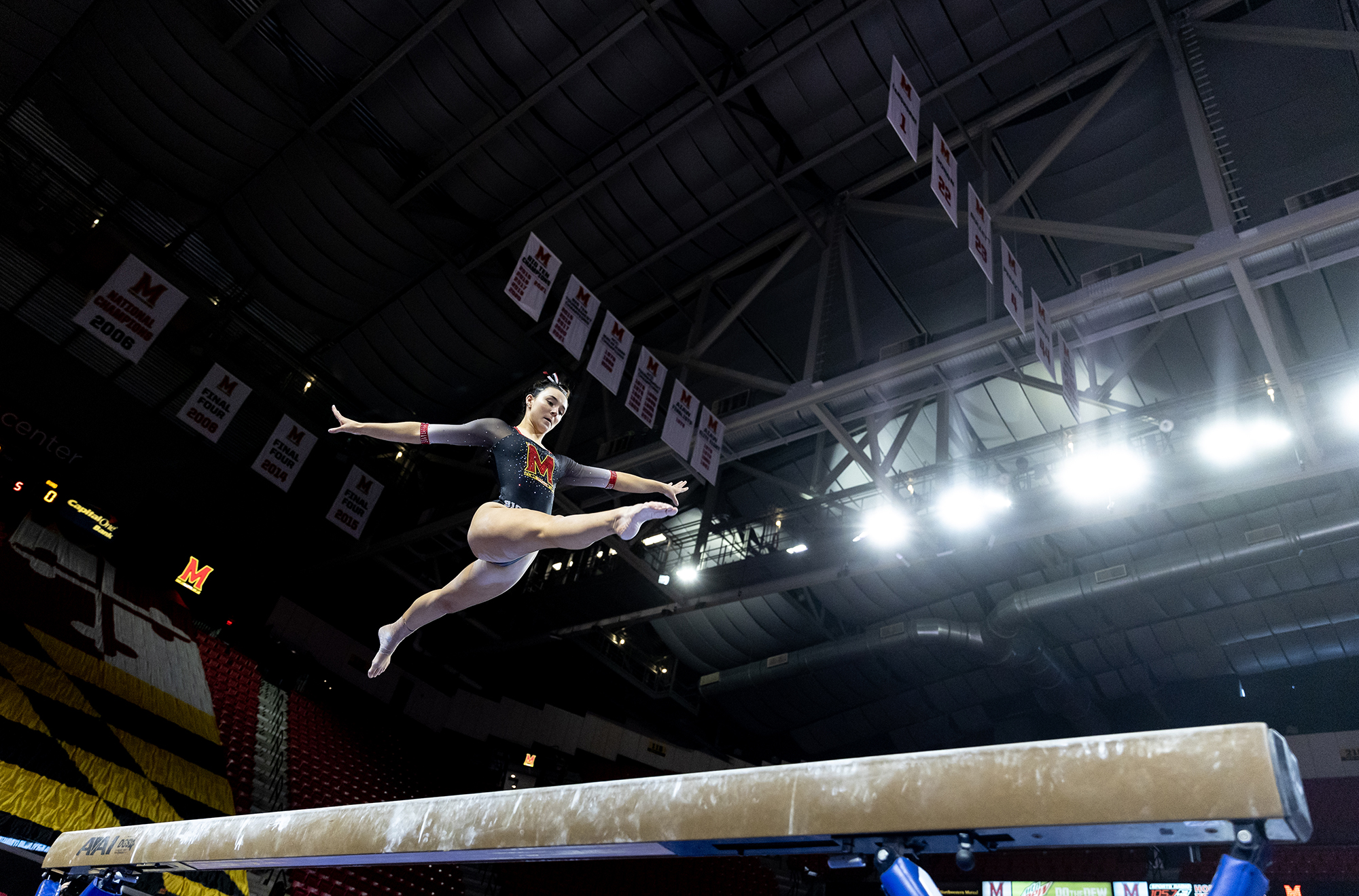 Maryland gymnastics is looking to continue its best stretch in program history.

In the last two weekends, the Terps have put up three of their top five all-time scores and are coming off of three consecutive scores above 197.

And in less than a week, Maryland will hit the road to deal damage in the Big Ten Championships in Columbus, Ohio.

Much of the success can be attributed to several gymnasts returning to peak form after recovering from injuries — in a sport determined by tenths, every skill and sequence in a meet matters. Even if just a few competitors aren’t quite at full strength, the achievement of the team changes greatly.

Luckily for the Terps, they are healthy and putting up big numbers. And Reese McClure and Aleka Tsiknias are perfect examples.

McClure has competed in all but the first two meets, while Tsiknias has been on bars for the entire season. Despite being in the lineup since the beginning of the season, they’ve only recently began putting up the big scores Nelligan and his squad expect from them.

In the last four meets — all of which were quads Maryland took the top spot in — McClure and Tsiknias have been at the top of their game.

Tsiknias tore her achilles at the end of last season, but you’d never know by watching her bars routine. In the last four meets, the junior has averaged 9.900, with three of her scores being at or above that mark.

McClure, who suffered what was described as a badly sprained ankle while warming up for a December intrasquad meet, struggled in her return. In her first five meets, McClure competed on only beam and averaged an underwhelming 9.480.

Still, she had full support from the team and Nelligan, who praised her toughness for getting up on the four-inch wide beam amid injury.

“I have a lot more confidence and I’m starting to hit my routines how I’d like to, and it’s radiating throughout the team,” McClure said on March 6.

But McClure and Tsiknias are far from the only big contributors who’ve stepped up for Nelligan’s squad.

The entire bars unit — who broke the program’s single-meet record at Towson, scoring 49.450, just to break that mark three days later on Sunday — is on fire.

On top of Tsiknias, the other four bars gymnasts who’ve competed in all of the last four meets have put up scores of a 9.9 or greater and are averaging at least 9.850 over that span. Within that time frame, Maryland’s bars unit has jumped from No. 26 to No. 13 in the nation.

Like Tsiknias, Emma Silberman is also coming off severe injury, having torn her ACL and meniscus last season. On top of Silberman’s program-record-tying 9.950 on bars, the junior has significantly improved her beam performance as of late.

In the last two weekends, Silberman averaged 9.850 on beam, compared to 9.657 in the Terps’ first seven meets.

Silberman, who competed in the All-Around in each meet prior to injury last season, returned to competing in every event for Maryland midseason. However, she was later taken out of the floor lineup with McClure in her stead.

And on top of McClure’s big numbers, several other Terps improved their floor scores.

Alexa Rothenbuescher averaged 9.875 over the last four meets compared to 9.739 in the previous seven.

Alongside Rothenbuescher and McClure on floor, Audrey Barber has seen increased scores, putting up 9.950 in back-to-back meets. The latter was on the final routine of Maryland’s regular season, ending her Xfinity Center career in a picture perfect manner with a stick on the last pass.

And although it may not have seemed possible, Barber’s All-Around scores have improved to an all-time high, putting up the best and second-best scores of her career in her final two regular season meets.

But what Barber’s done for the university and program might not be quite over yet — the postseason is just starting, and she and the Terps could bring the heat.

“I feel like finally, for once, I just got to sit back and watch it. I just tried to be a fan today on [Barber’s] last event and did my best not to get emotional,” Nelligan said. “I’m so thankful that I got to be a part of her journey, and I’m thankful for everything she’s done for the University of Maryland.”