Maryland gymnasts Silberman, Tsiknias leaned on one another throughout injury rehab 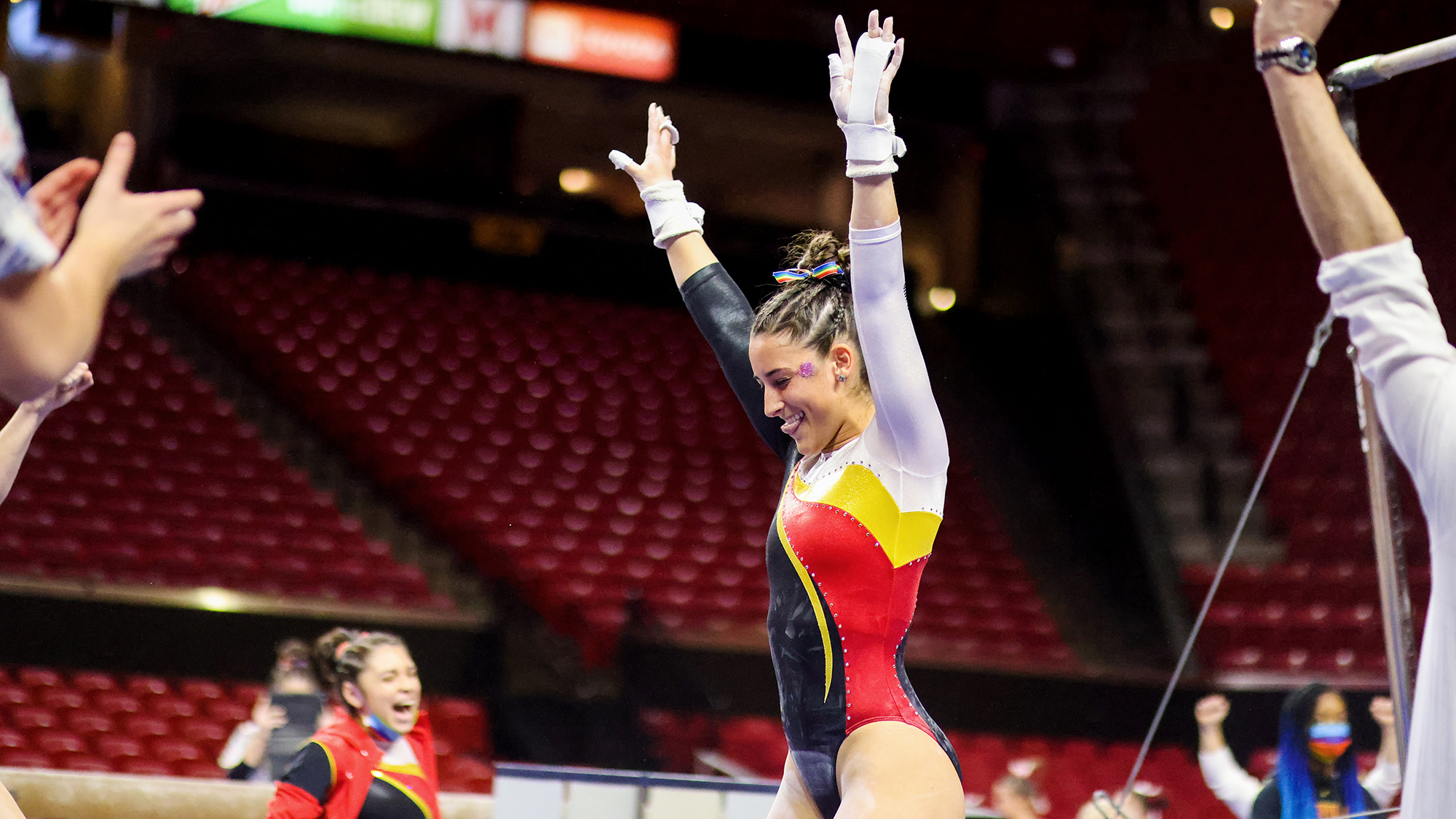 Returning from severe injuries, juniors Emma Silberman and Aleka Tsiknias were in for a grueling summer, regardless of how or where they went about it.

But not all options would be as demanding as the one they ultimately both chose to go with — staying in College Park and going all in on their recovery.

As a result, both Silberman and Tsiknias, who’ve been mainstays in coach Brett Nelligan’s lineup since their freshman years, have returned to the mat and put up big numbers for Maryland gymnastics.

“It’s a credit to Emma and Aleka. They committed to staying here this summer so they could do physical therapy and strength. And they just absolutely worked day in and day out tirelessly,” Nelligan said. “You get assigned your treatments together, you get assigned your strength schedule, and they would ask if they could add one extra day … it just really speaks volumes to their character, and their dedication and determination.”

Silberman and Tsiknias could have returned to their permanent homes, found their own physical therapists and rehabbed their injuries three times a week. But in College Park, they had physical therapy five times a week with two different doctors on top of the aforementioned conditioning, with the coaching staff by their side throughout the process.

Silberman’s ACL and meniscus tears came in February 2021 and Tsiknias’ Achilles tear in March. After both had surgery in March, they made the decision to stay in College Park for the summer.

On top of the physical demand, though, both Silberman and Tsiknias dealt with the mental challenges of the rigorous summer. For Silberman, that included the consequential setbacks from her injury unrelated to gymnastics.

“I couldn’t drive, and I also couldn’t walk, so it honestly left me feeling a little bit trapped,” Silberman said.

Getting her through the challenges, though, was Tsiknias.

“I really obviously didn’t want to see her go down, but having someone there, pretty much in the same situation I was in, was able to make us push each other, and we worked super hard together,” Silberman said. “Even though we did have different injuries, we had pretty much the same timeline. And that’s why we’re at where we are today, because we were able to push each other.”

The sentiment of Silberman was nearly identical to that of Tsiknias, who felt that despite their individual differences, their chemistry in recovery was quintessential to their return.

“Emma and I are very different personalities, but we push each other, we help each other,” Tsiknias said. “It was definitely great to have someone by my side to go to PT with because some days, there weren’t such easy days, and she was always there to uplift my spirits. And I’m sure I did the same for her. It was just a really great experience, and it brought us both closer, as friends.”

For Tsiknias, many of the struggles were the smaller things that come along with returning from a severe injury.

“The biggest thing … that was a challenge for me, was being able to overcome little things that would happen. So like, as I was ramping up running again, I had little issues and like other pains in my foot that really kind of like, frustrated me, because I was already out with such a big injury, but just like coming back, you’re gonna have little issues that come along,” Tsiknias said.

Despite all of the obstacles along the way, Silberman and Tsiknias’ dedication throughout the summer has been evident on the scoresheet.

Through the Terps’ first two meets, Tsiknias has competed on bars in both, scoring 9.725 in the season opener and tied the team-high against Rutgers, scoring 9.825.

Silberman has been Maryland’s second leading scorer this season and has averaged a score of 9.796 while competing in six events and has yet to score below 9.775.

Despite their success, both Silberman and Tsiknias are still working their way back to full strength, which would entail them participating on floor.

Tsiknias, who said she hopes to return to competing on floor soon, competed on floor and bars in each meet of her freshman and sophomore years, as well as competing on vault occasionally.

Silberman is currently eying a return to floor and is considered week-to-week, per a team spokesperson. When she does return, she will be one of two all-around competitors, alongside Audrey Barber. Silberman competed all-around in seven of 10 meets her freshman year, and in each meet prior to injury last season.

The floor unit is dealing with a substantial amount of injuries, as on top of Silberman and Tsiknias, Tayler Osterhout and Reese McClure have yet to compete this season.

Per a team spokesperson, Osterhout is getting closer, but not ready to return for the Terps’ meet on Saturday at Michigan State. McClure is slated to make her season-debut on beam, presumably easing her way back onto floor and vault throughout the season.

With several key pieces out, the consistency from Silberman and Tsiknias has been all-the-more valuable for the Terps, who look to keep improving their scores each week.

The Terps appreciate the work of strength and conditioning coach Lorenzo Tomasiello, as well as the two physical therapists, Mike Zarro and Rob Rowland. But just as significant as anything else is the credit that Silberman and Tsiknias gave each other for going through everything together side-by-side.