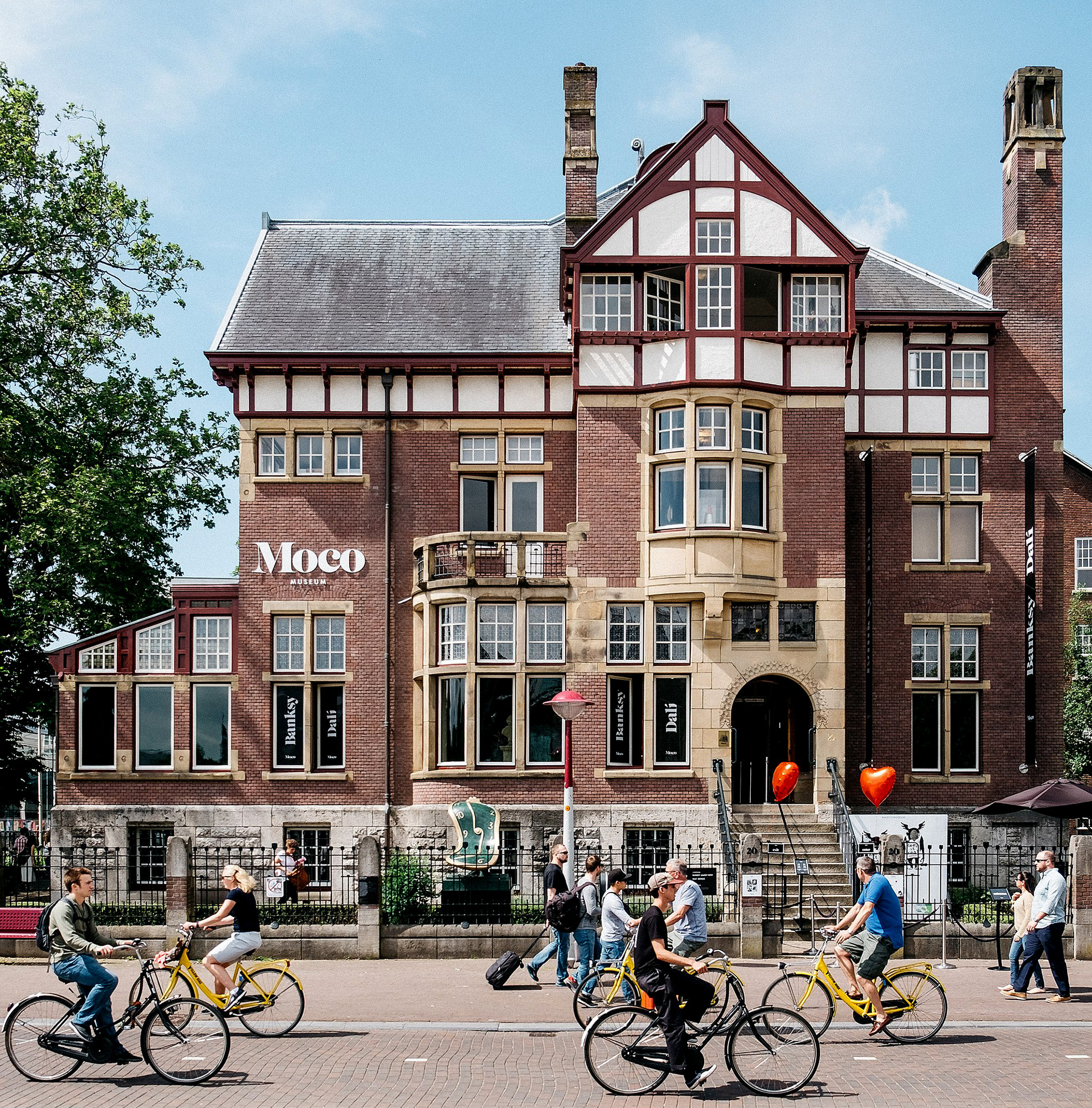 AMSTERDAM, Netherlands — Five police officers clothed in riot gear frolic through a grassy meadow as their bulletproof helmets flap in the air and their batons swing from their belts. Spray painted atop a lime green background, this large scale work from the renowned street artist Banksy serves as an ironic commentary on police violence in England.

Banksy’s piece, titled Bean Field, is one of many poignant installations at The Moco Museum in Amsterdam. Like its predecessor — the MOCO Museum Barcelona — the independent museum is home to iconic modern and contemporary artwork from world renowned artists, such as Andy Warhol, Jean-Michel Basquiat and Keith Haring, according to its website.

Artists represented throughout the museum call attention to systematic political issues in an effort to present new, underrepresented perspectives. In all, the museum enables visitors to zoom out of the reality we live in.

Banksy depicts the officers prancing, carefree on the otherwise empty canvas, with two figures holding hands as if to emphasize the foolishness of violence. Combining the lifestyle of the New Age travelers with the battle-ready robe of the police officers, Banksy exemplifies the drastic degree to which these parties clash.

While Banksy’s subversive commentary highlights the idiocy embedded in certain social events, other artists such as Robin Kid, also known as The Kid, allude to the social friction that stems from dissent in democracy. More specifically, The Kid reimagines polarizing social issues to illustrate the thin and progressively blurring line between innocence and corruption facing youth.

In I Saw The Sun Begin To Dim, The Kid extracts new meaning from the tale of Pinocchio, a coming of age story where Pinocchio is punished for his childish mistakes. Pinocchio is painted face down, drowning in a pool of water. Two images of the same person from different angles are layered just over one another on the left side of Pinocchio. The images show an exhausted teenager with the American flag weighing on his shoulders.

The Kid also calls to attention the double standard for those imposing the rules while illustrating the hypocrisy of punishing someone who is trying to learn the ropes of life. The oil painting, in its collage-like composition, depicts a teen burdened and fatigued by societal expectations of perfection. This underscores the disproportionate weight put on today’s youth compared to those in power who often go unscathed for their mistakes.

Artistic commentaries are not only subject to people-versus-power narratives. French photographer and filmmaker JR focuses on portraying new perspectives around complex social issues that plague various communities. His work serves as a conversation starter for building awareness around global injustices.

In one piece, titled The Gun Chronicles: A Story of America, JR cuts out a print of a conference table surrounded by political officials. Gun control advocates are stacked like bleachers behind the left side of the table as gun rights supporters stand on the right with rifles aimed in the air.

[The oldest gallery in Spain offers a renewed look at reality]

It wouldn’t be the Moco Museum without also dedicating a section to NFT installations. A non-fungible token is a digital asset that represents real-world objects such as art, but are bought and sold online, according to Forbes.

Mike Winkelmann, a computer science programmer better known as Beeple, transformed his hobby of drawing into a multimillion-dollar digital art career through these very creations. As one of the developers of the “everyday” movement in 3D graphics, Beeple has created a digital art piece daily for the last thirteen years, titling it The First Five Thousand Days. Sold for $69 million, this JPEG compilation shatters notions of fixed art while corrupting traditional schools of thought with his apocalyptic visions.

Beeple depicts greedy naked presidents, evil cartoons and gory science experiments that all illustrate a fictional future destroyed by society and politics. Climbing into viewers’ minds, in the darkest and most unsettling corners of our own apocalyptic fantasies, Beeple brings to life the mental mayhem society has endured throughout the pandemic.

For instance, in one piece of the Everydays – Raw collection, a naked Donald Trump with a baby’s body is bent over the knee of Abraham Lincoln, with his red bottom pointed upward. Lincoln, with his right hand raised to spank Trump, furs his eyebrows in disgust as he punishes the seemingly unbothered former president.

In another piece, President Joe Biden’s head appears atop a toned, curved upper body with large breasts held up by a blue bikini top. Emerging from a red, white and blue triple tier cake, Biden’s portrayal in the work seems to serve as a comical commentary on the laughability that has become the American election system.

Whether underscoring hypocrisy or spotlighting systematic political issues, the Moco Museum features a wide array of subversive commentary on current social issues. Pulling viewers away from their own perspectives, these pieces give museum visitors a zoomed-out view of the reality we live in.