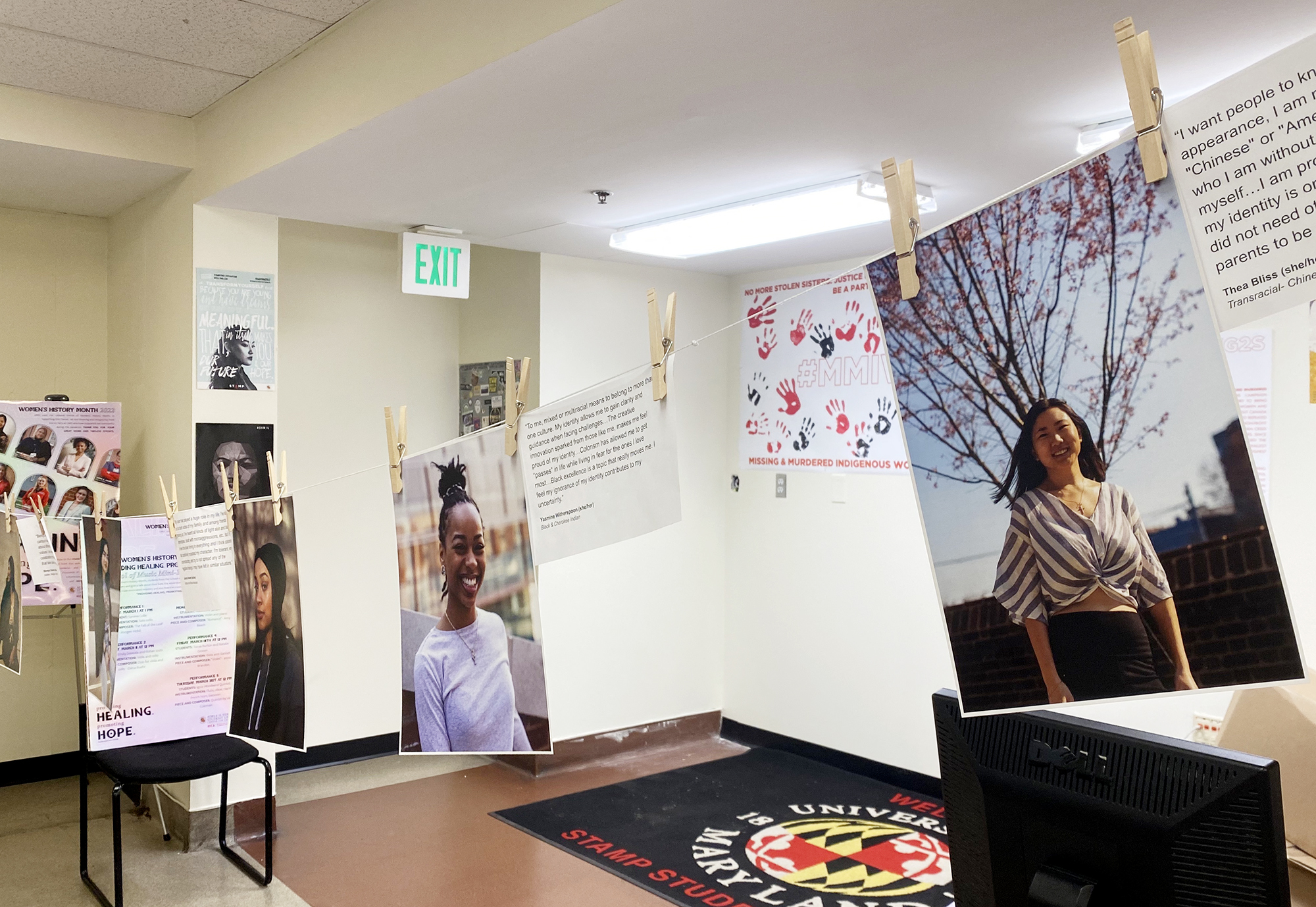 Printed portraits of 29 multiracial University of Maryland community members are strung along the walls of the MICA office’s Cozy Corner in Stamp Student Union.

They are all distinct in clothing, posture and physique. Clothespinned next to these photographs are their stories, which bring meaning beyond their appearances and bring light to their individual identities.

One of the gallery’s subjects, Alexander Pryor, appears with a printed quote that says, “I’m Black + Korean, period. I am not “half” anything. No numbers are needed.”

“I am proud to be adopted and know that my identity is one that I’ve molded on my own. I did not need others to tell me who I was, nor birth parents to be raised in the image of,” Bliss’ quote reads.

In celebration of the university’s Multiracial Heritage Month, the Multicultural Involvement Community Advocacy office opened its annual “Mixrepresented” photo gallery Monday night. The exhibition, which will run through March 31, aims to debunk the assumption that multiracial and biracial people are a monolith, according to MICA’s promotion materials.

The gallery was organized with input from the Multiracial Biracial Student Association.

“We’re giving agency back to folks that actually identify as multiracial,” said Ghonva Ghauri, the MICA coordinator for multiracial and Native American/Indigenous student involvement and advocacy.

The “Mixrepresented” exhibition is part of MICA’s monthlong program centered on the theme of “Interwoven Identities: Navigating the Intersections Within Yourself and in Your Community.” The theme focuses on the intersectional experiences of multiracial communities, according to Ghauri.

“Interwoven implies that it’s not just parts and fractions coming together. It’s literally tied together,” Ghauri said. Ghauri added that the theme not only interrogates the complexity of personal identity, but also how it relates to being in broader communities.

The 2022 exhibit comes after two years of postponement due to the COVID-19 pandemic limiting in-person gatherings, according to MICA staff members. The exhibit combines unreleased photographs taken in 2020 by Heather Kim and photographs taken about two weeks ago by Alex Mullen, the graduate student coordinator for Latinx student involvement at MICA.

Mullen said he wanted the individual stories in the exhibit to help visitors learn about a diverse array of experiences.

“What I hope is that people really look at the stories that people tell and see how being multiracial is its own experience, and that not everybody experiences it in the same way,” Mullen said.

The opening night event included a roundtable discussion, where participants shared reflections and discussed themes such as colorism, immigration and media representation.

Rishidev Khatak, a junior government and politics major, recognized the importance of personal agency from the discussion.

“Individuals should have the autonomy to be known from their own backgrounds, experiences or identities that they inherited … or have taken throughout their life,” Khatak said.