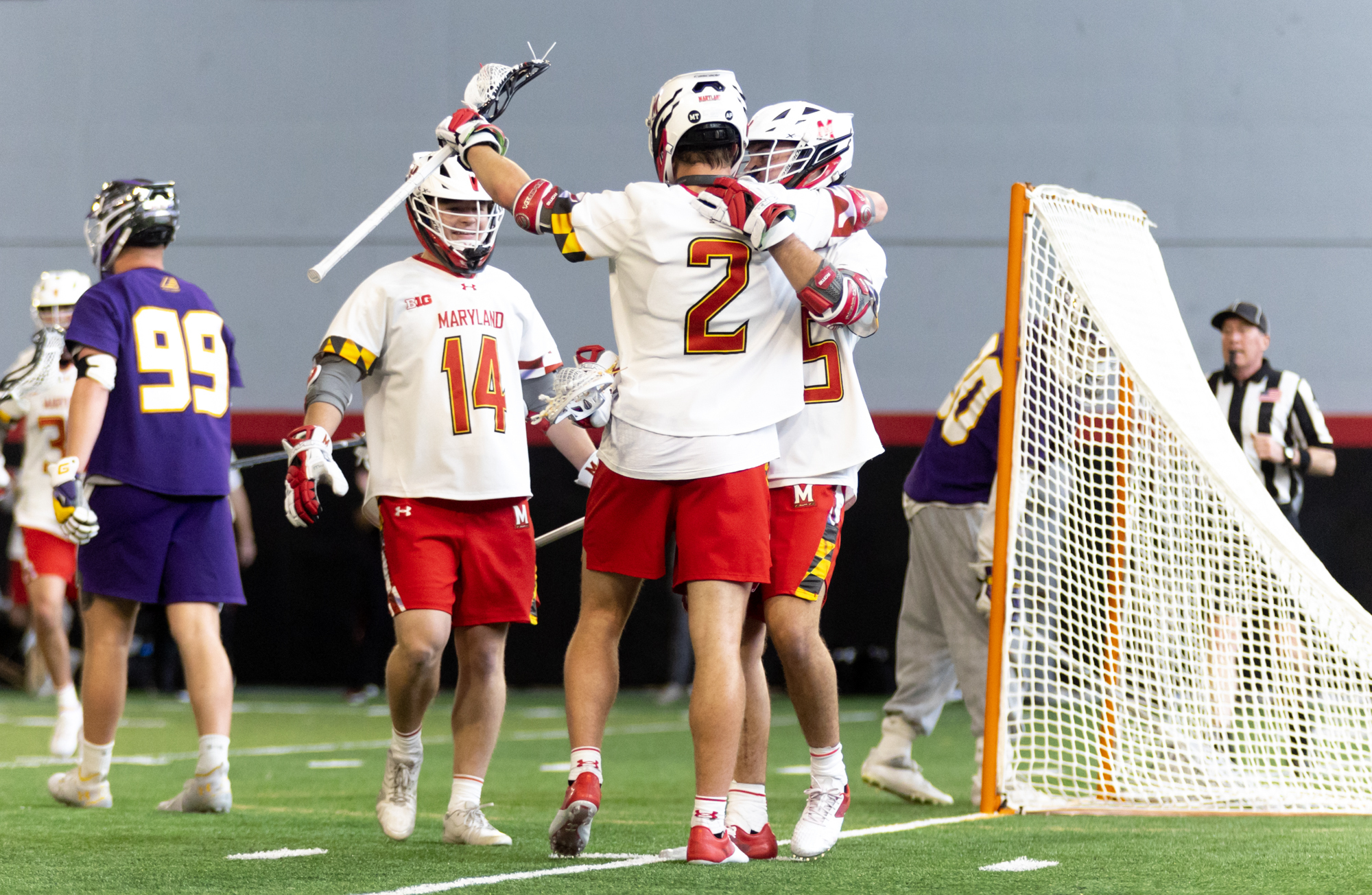 A rip from Owen Murphy to start the game began a run of 11 unanswered first-quarter goals for Maryland, as it quickly ran away from Albany.

An all-time performance from the Terps propelled No. 1 Maryland to a 24-6 trouncing of the Great Danes on senior day.

Despite building an early lead, the Terps put on their best offensive and defensive performance of the season, limiting Albany to only six goals.

Coach John Tillman was pleased with his team’s sharpness throughout the match despite holding a large lead for most of the game.

“I thought our guys were able to stay focused and dialed in instead of relaxing, and that’s a credit to our leadership,” Tillman said.

Maryland scored the most goals in a game in program history since a 26-3 win over Radford in 1995.

Due to impending inclement weather, the game was held inside the Jones-Hill House, making it the first sporting event to be held in the venue formerly known as Cole Field House since March 2002.

It was also the first indoor home game in Maryland men’s lacrosse history.

Murphy started off the game with a scorching shot that beat Albany goalkeeper Tommy Heller.

Two Jonathan Donville goals from Logan Wisnauskas assists sandwiched an Eric Malever goal as the Terps raced out to a 4-0 lead.

Maryland scored three times in the last 38 seconds of the quarter, as Anthony DeMaio and Wisnauskas got on the board before John Geppert won the ball off Albany’s goalkeeper and scored to cap off the first quarter.

The 11-0 run in the first quarter gave the Terps an insurmountable lead after just 15 minutes.

“I thought we shot incredibly well,” Tillman said. “[We] put the ball in really good spots against a good goalie, which created some momentum.”

It was the second time the Terps shutout a team through the first quarter this season, after holding Syracuse to zero goals through 15 minutes in Maryland’s first away game of the year.

Albany got on the board before Daniel Maltz scored his first goal of the game, cutting to the net and finishing a pass from Koras to make it 12-1.

Bubba Fairman and Corey Yunker traded goals before a powerful Geppert goal began a 5-0 run for the Terps to finish off the first half.

Daniel Kelly grabbed his first two career goals for the Terps in that run, capping off the half with a simple goal right in front of the crease to send Maryland into the break with an astounding 18-2 lead.

The Terps dominated all across the field in the opening half, winning the faceoff battle 16-6 and converting on 18 of its 25 shots on target.

Gavin Tygh won the faceoff to begin the second half and found Maltz, who dished it to Kelly for his first career hat trick just nine seconds into the third quarter.

Maryland got lots of young faces onto the field in the third quarter, as Justin Sherrer, Kevin Tucker  and Garrett Gibbons all bagged their first career goals for the Terps in the quarter.

Gabe Goforth also scored his first career goal, the only goal from either team in the fourth quarter as Maryland rode out the game to a commanding victory, 24-6.

The Terps dominated all over the statsheet, picking up 49 groundballs and winning 23 of 34 faceoffs. Fifteen different goalscorers found the back of the net for Maryland as it cruised to 6-0.

On top of the incredible win and senior day celebrations, Tillman was excited to get lots of different players on the field as the Terps approach the business end of its regular season schedule.

“Obviously on senior day, to get a win for the seniors including [Jonathan Donville] and all those guys that mean so much to us, really happy for them,” Tillman said. “On top of that, to get so many guys in… and I thought a lot of them showed very well, just an awesome day.”