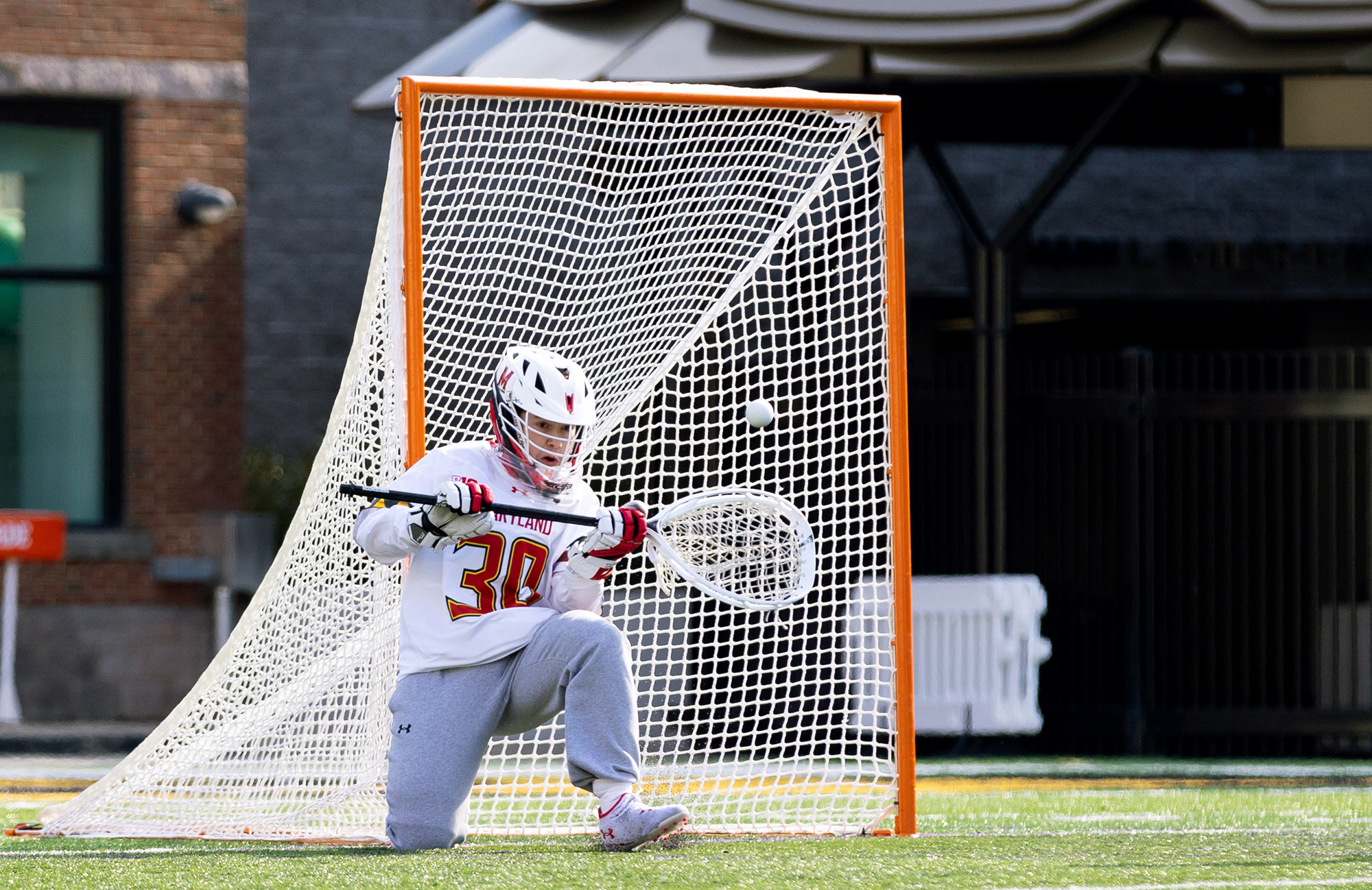 Logan McNaney kneels to make a save during Maryland men's lacrosse's 15-10 win over Princeton on Feb. 26, 2022. (Cam Andrews/The Diamondback)

Logan McNaney saved a shot from Notre Dame’s Eric Dobson, but faced pressure to clear the ball as he was hounded by two Fighting Irish players.

His attempted pass was caught by Pat Kavanagh, who immediately looked to go to the vacant net.

With the goal wide open, it looked certain that Kavanagh would score.

That was before McNaney raced back in front of the net and blocked Kavanagh’s shot on the doorstep.

McNaney wasn’t the only one to step up to the task against Notre Dame. Maryland’s entire defense stood firm as the Terps held the Fighting Irish to only nine goals in No. 1 Maryland men’s lacrosse’s 11-9 win over the No. 7 team in the nation.

The Terps’ defense has played a major role in Maryland’s unbeaten start to the season and held a ranked team to 10 goals or less for the fourth straight game on Saturday.

McNaney tied his season-high in saves with 12, including the incredible point-blank save from Kavanagh along with other impressive stops from close-range opportunities. Both 12-save games have come away from home.

“Logan bailed us out a lot,” midfielder Roman Puglise said. “With some of those one-on-one saves, he really helped us.”

Maryland defensive midfielders limited Notre Dame’s midfield to only one goal through the first three quarters, although midfielder Wheaton Jackoboice was able to get on the board twice in the final 15 minutes.

Puglise was pleased with how Maryland practiced to adapt to the weapons in the midfield of the Fighting Irish, mentioning that the Terps’ experience playing Notre Dame last year helped preparations.

“A lot of dodging this week and guarding guys that are similar statures on our team, trying to get ready,” Puglise said. “I think we had a good game plan.”

Puglise also contributed with a goal on offense in transition, scoring in his third consecutive game.

Even when the defensive midfielders were beaten, the Terps stayed solid with the starting backline of Brett Makar, Matt Rahill and Ajax Zappitello holding the Kavanagh brothers to a combined four points — their lowest total this season.

Maryland’s defense also kept Notre Dame from gaining momentum throughout the game, preventing the Fighting Irish from going on many runs.

Apart from a three-goal run from the end of the third quarter into the beginning of the fourth quarter, Notre Dame didn’t score any consecutive goals, preventing them from getting into a flow offensively throughout most of the game.

“I felt like [our defenders] did a good job of defending the knowns and sliding when we needed to and recovering,” coach John Tillman said. “And then at times when we made a mistake, Logan [McNaney] kind of bailed us out.”

After losing all four faceoffs in the first quarter, the junior won 18 of the 20 remaining to finish 18-for-24 on the day.

Wierman has impressed throughout Maryland’s first five games of the season, winning faceoffs at a 66.7 percent clip so far. Tillman was pleased with his performance once again on Saturday, as Wierman won 75 percent of faceoffs against the Fighting Irish.

“Luke did an unbelievable job after the first quarter and kind of really tilted possessions in our favor,” Tillman said. “So even when things were not going well, we would get possessions back.”