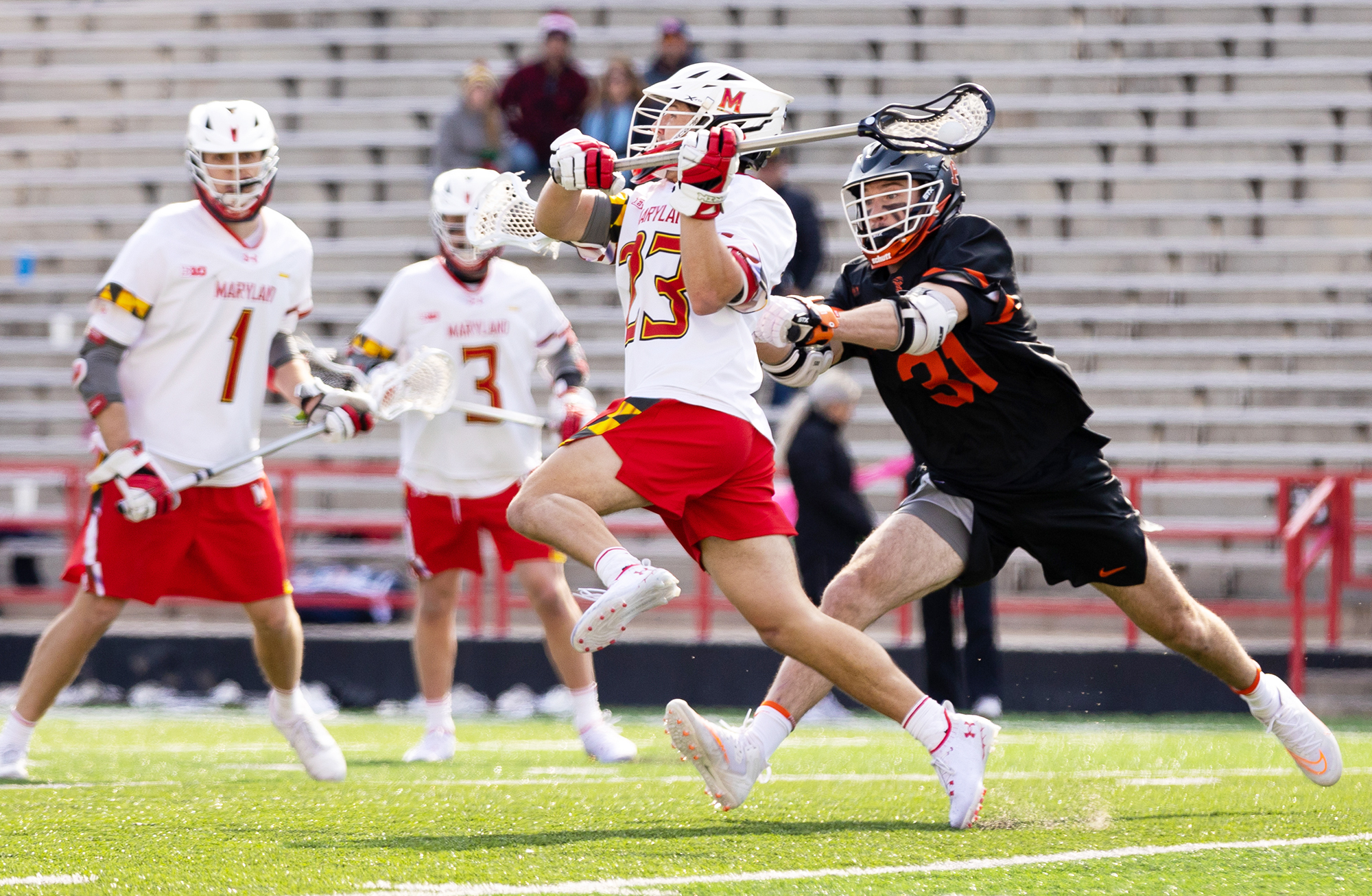 Kyle Long runs past a defender during Maryland men's lacrosse's 15-10 win over Princeton on Feb. 26, 2022. (Cam Andrews/ The Diamondback)

After Maryland men’s lacrosse led by as many as four goals in the second half, the Fighting Irish fought back to cut the Terps’ lead to one.

That was before Kyle Long received a pass from Jonthan Donville, setting himself and powering a shot past Liam Entenmann and into the top corner.

The goal gave Maryland the cushion it needed to hold on to defeat No. 7 Notre Dame, 11-9, in a rematch of last year’s NCAA tournament quarterfinal.

Both teams traded goals and runs throughout the intense game, which coach John Tillman likened to a boxing match.

“It’s round after round and blow after blow, you just gotta keep kind of punching and scrapping,” Tillman said. “Happy for the guys. I think they showed a lot of grit and heart and toughness.”

The win is the Terps’ fourth-straight win over a ranked opponent, as Maryland remains undefeated to begin its 2022 season.

Griffin Westlin scored the opening goal for the Fighting Irish after being left wide open on the doorstep before Maryland responded through a Logan Wisnauskas rip on a man-up opportunity inside the first three minutes of the game.

After a long scoring drought from both sides, Maryland native Will Angrick gave Notre Dame the lead with about five minutes left in the first half.

The Terps struggled to create opportunities in the first quarter. Maryland was outshot 13-5 by the Fighting Irish in the first 15 minutes, and went 0-for-4 on faceoffs to begin the game.

But the Terps bounced back to begin the second quarter, winning two consecutive faceoffs and scoring two straight goals.

Eric Malever found the back of the net for the first time since Maryland’s game against Loyola before Wisnauskas scored his second to give the Terps their first lead of the game.

Pat Kavanaugh wrapped around the goal and rocketed a shot past Logan McNaney, finding his first score of the game. Jack Koras immediately responded for the Terps, cutting to the middle of the field and firing a shot past Entenmann to make it 4-3.

Maryland extended its lead after taking advantage of a Notre Dame turnover, with Wisnauskas quickly spotting Roman Puglise in transition.

Westlin would capitalize off of a man-up opportunity to end the half, scoring his second goal with 16 seconds left in the second quarter to cut the Terps’ lead to one at halftime.

Maryland couldn’t miss at the beginning of the second half.

Long found the net first, wrapping around and firing past Entenmann just 31 seconds into the half.

Long then found Anthony DeMaio, who extended the Terps’ lead to three.

But after Walker and Brennan traded goals, Notre Dame went on a run of its own.

Both Kavanaugh brothers — Chris and Pat — scored within the final minute of the third quarter before Wheaton Jackoboice cut into the middle of the field and drove past multiple Maryland defenders to pull the Fighting Irish within one.

The late third-quarter run was similar to Syracuse’s against Maryland on Feb. 20, when the Orange scored twice in the final 33 seconds to cut the Terps’ lead to one.

While Maryland’s defense was impressive throughout the game — holding Notre Dame to single-digit goals — Tillman hopes to see an improvement closing out quarters.

“I think we were a little bit gassed and unfortunately they made a play,” Tillman said. “So definitely something that we want to be better at, kind of finishing quarters a little bit better.”

After a scrum in front of Notre Dame’s goal, Malever picked the ball up and fired a low bouncing shot past Entenmann to make it 10-8 to the Terps.

The Terps’ defense held strong through the rest of the game, keeping the Fighting Irish off the scoreboard in the final five minutes in their 11-9 win.

The final defensive stands were key as the Terps came out on top of a challenging game.

“Obviously, how it went last year, they have that on their mind and they have that vengeance coming back at us,” Puglise said. “We were able to just kind of keep it level headed and stay simple with our system and our sets and really lean on each other.”