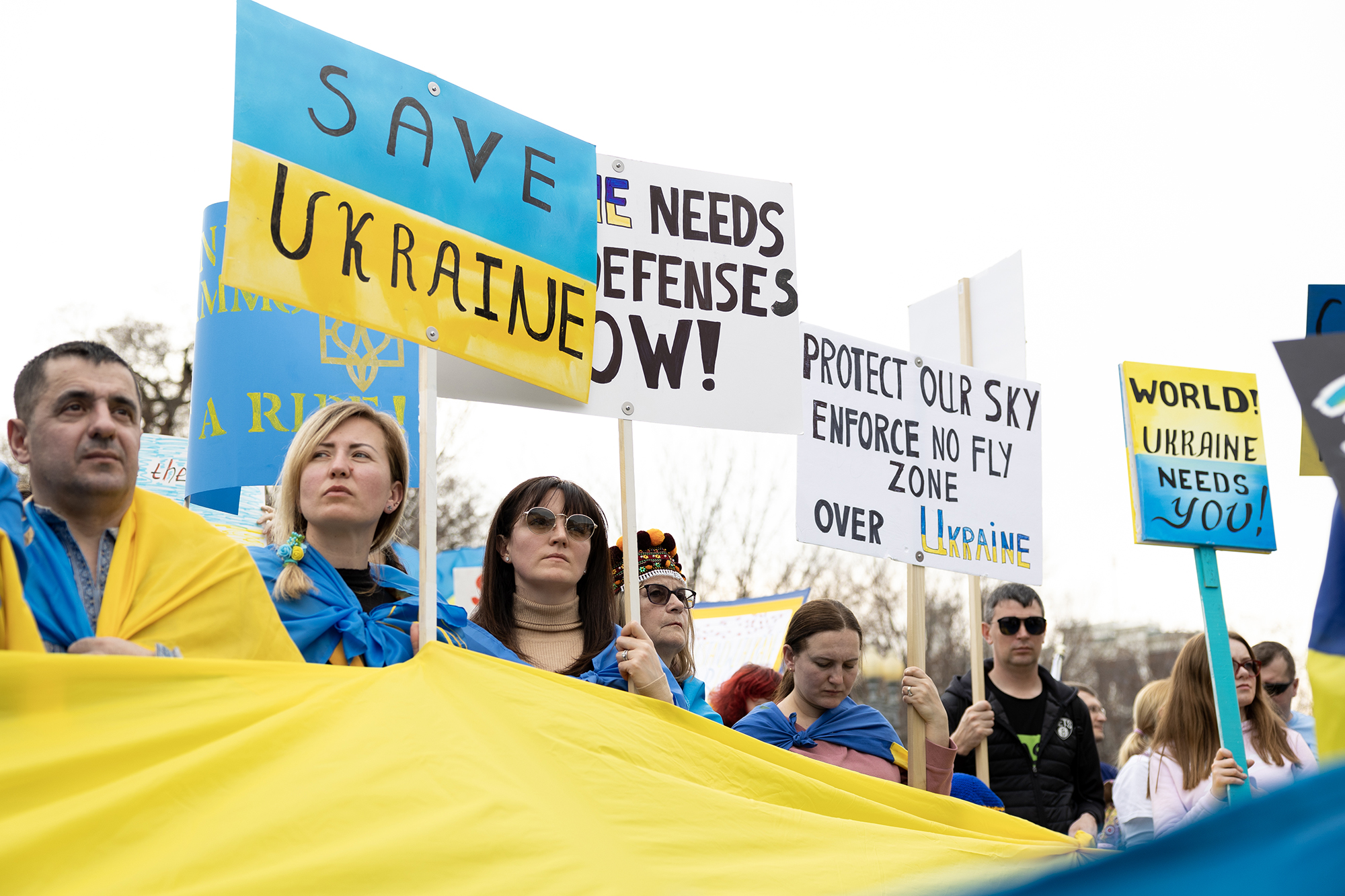 Viktoriia Savchuk, a communication doctoral student at the University of Maryland, lived in Ukraine for 27 years before moving to Washington, D.C.

Savchuk was getting ready for bed when she received a message from her classmate: “You probably want to check the news.”

“I was just crying, and I just couldn’t believe that it started happening,” Savchuk said, adding that her entire family lives in Ukraine.

Her brother was in Kyiv, Ukraine’s capital, when there were explosions, Savchuk said. She tried calling, but he was asleep and didn’t answer the phone.

“It was the most terrible hour,” Savchuk said, until she heard back from him.

Her brother gathered his documents and went to a metro station, where many Ukranians have been seeking shelter during the invasion.

What would normally take five hours to drive took more than 12 hours for her brother to travel  to their hometown of Lutsk in northwestern Ukraine, Savchuk said. She was checking on him and checking the news the whole time.

Savchuk said it might have been the happiest moment of her life when her brother called to say he had finally reunited with their parents in Lutsk.

But being home didn’t guarantee safety — it just meant Savchuk’s family would be together while Russia began its attack on Ukraine with shellings, bombings and air raids.

“Then in the morning I went to class, and I listened to students’ presentations,” said Savchuk, who teaches a class at this university on presentational speaking. “In between classes, I was just crying.”

The exact numbers of civilian and military deaths in Ukraine are unknown as of March 6.

As for Putin’s reasons for invading Ukraine, “I think that he sees it as trying to maintain a Russian foothold in … what they see as their sphere of influence,” said Sarah Croco, a government and politics professor at this university whose research interests include international conflict.

Ukrainian President Volodymyr Zelensky “has been a thorn in Putin’s side for a while, because he represents this kind of democratic alternative to the Russian people,” Croco added.

“We haven’t been in something kind of this tense or this potentially high stakes in a long time,” Croco said. “This is a nuclear state threatening other nuclear states.”

Gregory Kramida, a computer science doctoral student at this university, said he grew up in Russia and the U.S.

“Of course I root for Ukraine,” Kramida said. “I’m very upset, disheartened, and I think Russia is being a total bully.”

Thousands of people across Russia have protested the war, and many have been arrested by Russian police, Kramida added.

More than 4,000 protesters in Russia were arrested on Sunday, according to OVD-Info, an independent human rights media project.

Anton Goretsky, a computer science doctoral student at this university, said their parents were born and raised in Kyiv before moving to the U.S. in the 1990s.

Goretsky has never lived in Ukraine, but they have family there and in Russia, they said. Their family has had to figure out how to protect themselves during the ongoing invasion.

“My family in Kyiv, they’ve made a bomb shelter out of their home just outside the city and are hiding there,” Goretsky said.

They added that having family in both countries is a “pretty common experience” for Russians and Ukrainians.

“By [Russia’s] autocrat’s decision making, you have people that are going to die, and you have hatred that will seriously build. And it really complicates the relationship between two places that … have a lot of ties to each other,” Goretsky said.

They had dreams for Ukraine to become a more open and integrated country — with better opportunities for all Ukrainian people — by moving toward Europe and away from authoritarian Russia. With the war, that dream “feels ripped out from under me,” Goretsky said.

“Emotionally, psychologically, I’m not OK. But physically, I’m safe,” Savchuk said. “I’m here in the U.S., and I’m not in a shelter [in Ukraine], and I have access to [the] internet and everything, so I know that I can work more. And I feel like I need to do that — like I need to be involved.”

She has been volunteering with United Help Ukraine — a nonprofit providing medical aid and humanitarian relief to Ukrainian citizens — by helping with communications and translations.

Savchuk also helped organize a vigil for Ukraine at this university, picked up suitcases for donations and attended rallies near the White House to express demands that would help Ukrainians.

Some demands include the U.S. establishing a no fly zone over Ukraine, providing more weapons and personal protective equipment and imposing stricter sanctions on Russia’s energy and banking sectors, Savchuk said.

“We want to ask people for more support — addressing politicians here specifically in the U.S. and asking them for more bold actions to help us respond and defend ourselves from Russian aggression,” Savchuk said.

CORRECTION: A previous version of this story misstated that Russian President Vladimir Putin declared war on Ukraine. Putin launched an invasion of Ukraine, but did not officially declare war. This story has been updated.