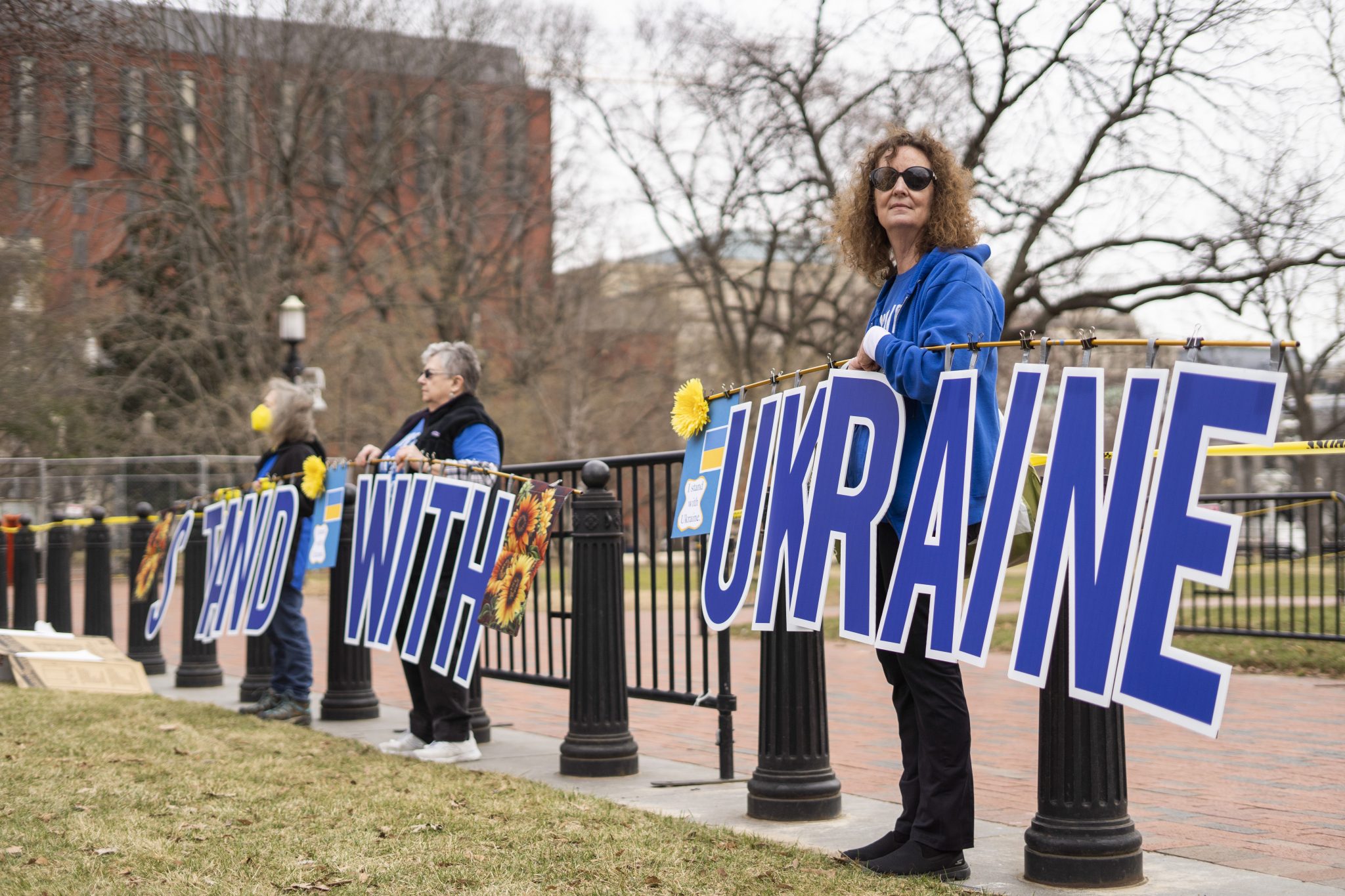 Ukrainian supporters rally near the White House on March 1, 2022. Members of the group have been protesting every day since the invasion and plan to continue, according to the organizer's, United Help Ukraine, Facebook page. (Taneen Momeni/The Diamondback)

Experts from the University of Maryland’s history department unpacked Russia’s ongoing invasion of Ukraine and placed the war within a historical context in a discussion hosted Wednesday.

Russian President Vladimir Putin has asserted that his country’s incursion into Ukraine is an effort to “denazify” the country, according to The Washington Post. By referring to Ukraine as a nation of Nazis, Putin provided a “deathblow” to the meaning of anti-fascism in Europe, said distinguished university history professor Jeffrey Herf.

“To declare a country a Nazi country is another way of saying you plan to engage in mass murder,” said Herf, whose research specializes in twentieth-century Germany. “The stench of antisemitism is very much present in this attack on Ukraine.”

Sarah Cameron, a professor in the history department who specializes in Russia and the Soviet Union, added Russia is playing into its contributions in the World War II to foster nationalism. The Soviet Union lost more than 24 million people during the war.

“Putin is really channeling and clinging to that deep sense of sacrifice that many Russians have during the Second World War,” Cameron said.

She added that assumptions from political leaders — including U.S. President Joe Biden — about Russia attempting to reform the Soviet Union do not match Putin’s current ideology in attacking Ukraine.

“This is a very different project that arguably draws upon … ideas of nationalism, of orthodoxy and of empire,” Cameron said.

This attachment to the Soviet Union’s World War II sacrifices, as well as misinformation campaigns accusing Ukraine of being a Nazi state, has led to widespread information warfare across Russia, panelists agreed.

The panelists also voiced speculations on the global implications of Russia’s invasion. History professor Piotr Kosicki addressed how many historians view the Russian invasion as the death of the post-Cold War world order and “liberal peace” — the idea the basic values and ethics of liberal democracy had won against threats from dictatorships.

Kosicki, a specialist in the transnational history of modern Europe, added in the past decade of Russian interference in other countries’ democratic processes, it was “remarkable” that so many European leaders came together and chose to take action when the nation targeted Ukraine.

Just as remarkable was the United Nations General Assembly’s denouncement of the Russian invasion Wednesday, Herf said. But the global response to Russian aggression comes too late, he added.

Herf equated the last two decades of Western response to Russia’s political endeavors as an era of appeasement similar to that of the United States’ response to Hitler in the 1930s.

“Russia did not become a pariah in world politics as a result of its aggressions of recent years,” Herf said. “When [Putin] looked at the world outside … he thought, ‘This is a great moment, this is a splendid opportunity. The West is divided. And now is the time to strike.’”

Cameron emphasized a major turning point of this conflict is that neither the United States’ military prowess nor the United Nations’ were able to deter Russia as it pursued military action in Ukraine.

This failure of the global order made the swiftness of sanctions from Western nations against Russia surprising, Cameron said.

In the first week of the war, Russia has already been taken aback by the strength of Ukrainian resistance, Cameron said. She added that the invasion has played a major role in establishing a sense of Ukrainian nationalism.

But for Herf, Russia’s history of invasion in other countries means a stark future for the war in Ukraine.

“To defeat [Ukrainian] resistance, Putin is going to have to engage in massive violence that Europe has not seen since World War II,” Herf said. “Let’s be frank, peace in Europe is going to require the end of the Putin regime.”