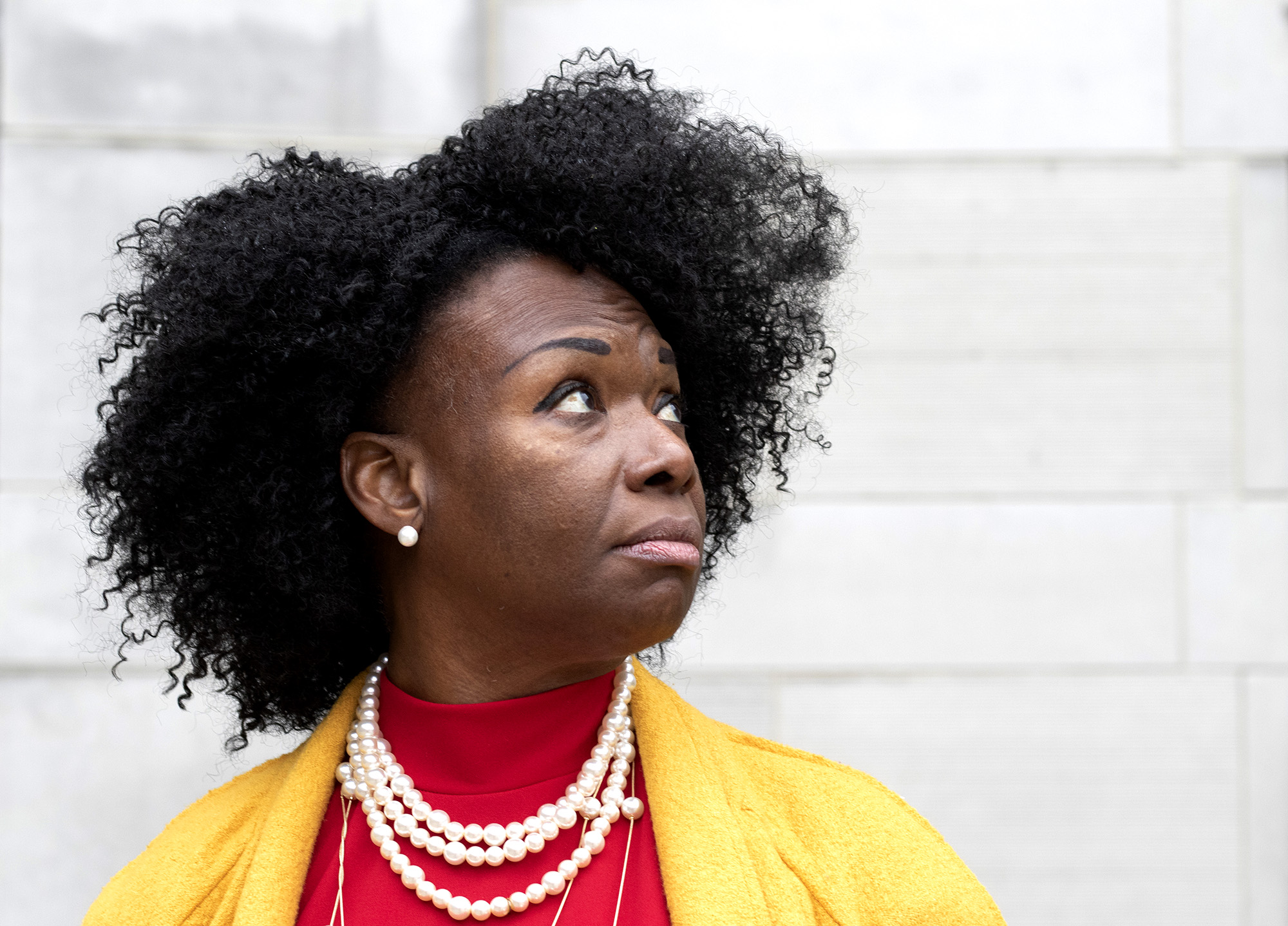 Associate journalism professor DeNeen Brown poses for a portrait on Feb. 24, 2022. The "Facing the Truth of History" discussion focused on Brown's work on two documentaries about the Red Summer of 1919 and the Tulsa Massacre of 1921 in addition to her journalistic work on the "Printing Hate" project. (Daryl Perry/The Diamondback)

DeNeen Brown, an associate professor at the University of Maryland’s journalism college, held a discussion Thursday about her experience uncovering the history of the Tulsa Massacre of 1921 as a reporter for The Washington Post.

The public policy school hosted “Facing the Truth of History: A Discussion with DeNeen Brown” at the Howard Frank Auditorium in this university’s business school.

Brown’s journey to report on Tulsa began while she was covering another story.

She had traveled to Montgomery, Alabama, in 2018 to write about the opening of the Equal Justice Initiative’s Legacy Museum and The National Memorial for Peace and Justice. Before returning to Maryland, she stopped in Tulsa to visit her father.

As they ate lunch together on Black Wall Street in Greenwood, a historically Black neighborhood in Tulsa, she realized the modern surroundings around her did not match the violent history.

“This is the site of the Tulsa Race Massacre, and it’s being gentrified,” Brown said.

An inflammatory headline in the Tulsa Tribune on May 31, 1921, sparked the massacre. The headline accused a Black teenager of sexually assaulting a white woman and acted as a “whistle call” to white Americans to descend on the courthouse and attack him, according to Brown. Over the next two days, Greenwood was looted and destroyed, and hundreds of Black Americans were killed.

Brown’s findings led to a series of stories centered on Tulsa. She sought out to research the historical context of racism and oppression, the covered mass grave sites and ultimately, the truth.

“This is the driving force behind my reporting,” Brown said. “I want people to know that real people, Black Americans, citizens of this country, were killed in our history not that long ago.”

Since 2018, Brown has influenced multiple projects with her findings.

“Printing Hate” is a project Brown inspired at the Howard Center for Investigative Journalism. The project aims to show how newspapers incited massacres and lynchings in the U.S. and relies on a team of editors, students and faculty from this university, as well as historically Black colleges and universities around the country.

Brown’s sphere of influence extends past print stories — she worked on documentaries that address not only the Tulsa Massacre, but also other violent racial tensions such as the Red Summer, a period of white terrorism and racial riots in 1919. Thursday’s event started with a clip from Rise Again: Tulsa and the Red Summer, the National Geographic documentary for which Brown is a contributing reporter.

“I feel that I was part of that process of helping to uncover a piece of the truth of what happened in the massacre,” Brown said in the documentary. “The survivors of the race massacre and activists in Tulsa have been telling their stories for 20 years, 30 years … I’m just adding a piece of the story to the narrative.”

Dr. Alana Hackshaw, an associate clinical professor and the chief diversity and inclusion officer for the public health school, was inspired to have Brown speak after seeing the Tulsa Race Massacre Traveling Exhibit in the business school last fall.

Hackshaw said that this event was largely an opportunity for Brown to showcase her research to students and faculty.

“Her work is so important right now, and not just for Black history,” Hackshaw said. “[It’s important] at a time when we are in a particular space where people are actively working to discourage people from learning about these episodes of history that help us to understand the different experiences that groups have had in this country.”

Throughout the discussion, attendees were given the opportunity to share their thoughts and ask Brown questions.

Senior public policy major and president of Black Students in Public Policy Joshua Winston shared that he was shocked to learn about the existence of internment camps for Black survivors of the massacre. He said that the importance of pursuing knowledge beyond what one already knows was his biggest takeaway.

“Pose the hard questions with the research that you’ve done, and make sure that no story and no stone is left unturned or untold,” Winston said.

For Sydney Neal, a junior public policy major and member of the public policy school’s Diversity, Equity, Inclusion and Belonging Task Force, being a person of color makes these conversations hit closer to home.

“It’s hard to hear these stories because they impact you in a different way,” Neal said. “It’s easier to picture these things happening to your family member, to your brother, or sister, someone you love.”

Ultimately, Brown shared that her goal is to inspire people to pursue the truth through her work. She says that while the truth can be painful, it is important to tell.

“I think the most important thing that I’ve tried to do in my research and my reporting is to bring humanity to Black Americans,” Brown said. “To tell their stories in a way that paints a picture of them to pursue the truth of their stories, to present the truth of history.”

CORRECTION: A previous version of this story misstated that Dr. Alana Hackshaw is the chief diversity and inclusion officer and an associate clinical professor in the public health school. Hackshaw holds these positions in the public policy school. This story has been updated.