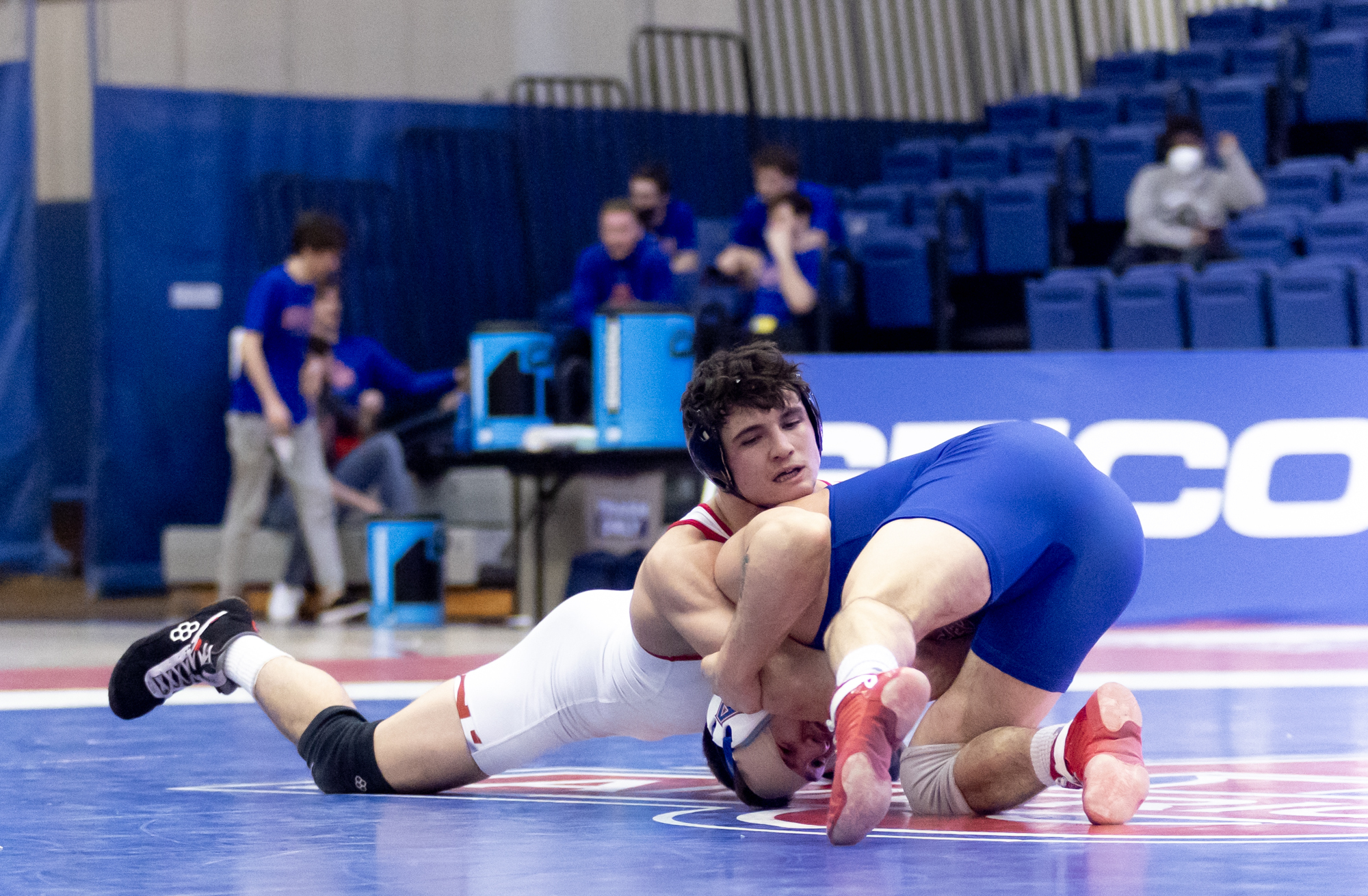 When the clock hit zero and the referee raised his hand, Solis flexed to the crowd and high-fived assistant coach Nick Brascetta as he walked off the mat to celebrate.

Solis finished in seventh place at 174 to get a spot on the podium alongside No. 8 Kyle Cochran — their podium finishes were highlights for Maryland wrestling at the 2022 Big Ten championships.

‘I’m really proud,” coach Alex Clemsen said. “Anybody that places in this tournament is a threat to be an All-American.”

Coming into the weekend, Solis was the nine seed and there were 10 qualifying spots available at 174.

In the consultation bracket, Solis and DJ Shannon (Illinois) were tied 1-1 late in the third period. There was little room for error knowing there was a berth on the line.

Solis flipped Shannon onto the mat to earn the two points and winning takedown. He held off Shannon’s comeback attempt to earn the qualifying spot.

“It’s the greatest feeling in the world,” Solis said.

It wasn’t the only time Solis had to dig deep to find a win.

In the first round of the championship bracket, he was locked in a tied 1-1 matchup with Gerit Nijenhuis (Purdue) in the closing seconds of the third period.

Solis locked Nijenhuis’s body throwing him to the mat. In the scramble, Solis kept his two feet in bounds to get the takedown and earn a 3-1 decision win — after, he pointed over to his corner in celebration.

The seventh place match at 174 was a rematch from eariler in the season. Solis faced a little adversity early after being down 4-2 in the first period against Connor O’Neill (Rutgers).

Then, after a quick escape and one takedown, Solis was in control. He used an offensive flurry to score eight unanswered points to win by decision, 10-4, to cap off an important weekend.

“This is a dream come true,” Solis said. “[Clemsen] keeps saying, ‘peak in March,’ and being able to beat some pretty good guys that I’m not expected to beat at this tournament feels amazing.”

Cochran’s path to the podium began with a comeback.

Cochran was down 6-0 to DJ Washington (Indiana) in the first round of the 184 Big Ten championship bracket.

But the Terps top wrestler racked up eight straight points without giving up another offensive point. Cochran’s five-point third period earned him a 9-7 decision win over Washington to advance.

The win by Cochran officially clinched his berth to the NCAA Championships for his weight class.

After the first round of the championship bracket was complete, only Cochran and Solis were able to advance to the quarterfinals.

Both had tough competition in No.1 Aaron Brooks and No. 1 Carter Starocci in rematches from Maryland’s dual with Penn State. And both struggled against the two NCAA Champions, giving up first-period falls to fall into the consolation bracket.

Rather than losing their momentum, Cochran and Solis made runs in their consolation brackets.

Against No. 9 John Pozanski (Rutgers), Cochran dominated from the top position en-route to a 4-0 decision win.

Cochran continued his run through the consolation bracket, beating Abe Assad (Iowa) by decision, 4-3. He finished with a winning takedown in the third period and held off a rally from Assad.

“The match in general was just a grind,” Cochran said. “It took a lot for me to get that takedown and secure that victory.”

Cochran’s second day of the tournament was less successful than the first. He lost to No. 6 Kaleb Romero (Ohio State) by decision and No. 19 Taylor Venz (Nebraska). But, he was the highest-placed Terp at a Big Ten Championships since 2019 — he finished in sixth place.

“It means a lot,” Cochran said. “It shows the work that we’re putting in the practice room.”

While Cochran and Solis thrived, their teammates had lackluster performances.

No. 29 Jaron Smith, Zach Schrader, King Sandoval all needed successful outings to clinch berths in the 2022 NCAA Championships. But all four fell through.

While Smith may make the NCAA Championships with an at-large bid, poor results hurt Schrader and Sandoval’s chances. Sandoval may even be out of the running for the Schalles Award.

Despite not getting all the wrestlers they hoped for into the NCAA Championships, the Terps clocked their best finish at the Big Ten championships since Clemsen took over the program. Two wrestlers placed on the podium and Maryland finished 13th the team score with 15.5 points — its most since 2018.