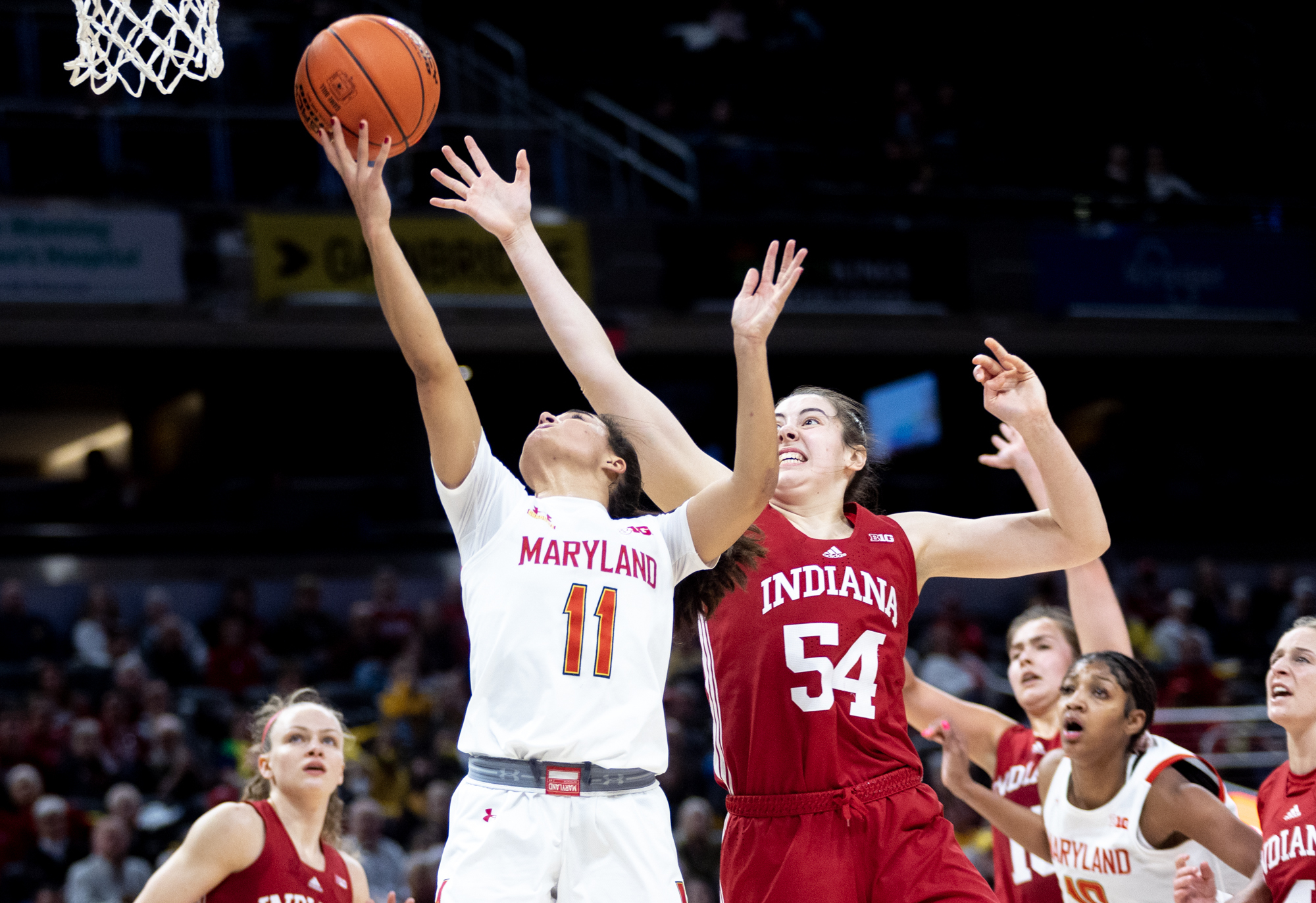 INDIANAPOLIS— Maryland women’s basketball struggled from start to finish in its quarterfinal matchup against Indiana. The one area in which the Terps thrived in, however, was on the offensive glass.

Twenty second chance points kept the game within reach, but when it mattered most, the same reason for the nail-biting finish came to be the downfall for the Terps.

Facing a seven-point deficit with just under five minutes left to play, Indiana was able to eat away at a significant chunk of time thanks to two timely offensive rebounds.

The first came from Nicole Cardano-Hillary, who crept down the baseline to gather the missed shot from Grace Berger. The second came a possession later, with Aleksa Gulbe collecting the back iron ricochet. In total, those two possessions from Indiana ate up just under two minutes.

While Maryland still had opportunities to close the gap, Indiana’s clock management was emblematic of the one-sided affair of the outing. The Terps exited the Big Ten Tournament in disappointing fashion, 62-51.

“This is a feeling for us that we’re not used to, but I think it shows you just how tremendous the league has been all season,” coach Brenda Frese said. “All the credit goes to Indiana. I thought they were the tougher team.”

The first of many marquee matchups in the Big Ten Tournament fit the billing early on, with both teams showing off their grit.

Aggressive defense set the tone for both sides, with the combined shooting percentage sitting at 31.3 percent by the first media timeout. When enough room was given, it was the Hoosiers who capitalized.

Berger took advantage of the size mismatch against Katie Benzan, sinking two mid-range jumpers over the smaller defender. Although Maryland fell behind, second chance opportunities came in abundance — albeit due to the 5-for-17 showing from the field.

“We shot really bad today, but you got to make layups, you got to find other ways,” Bibby, who shot 2-for-11, said. “We just didn’t have that flow in our offense. We were driving the lane with four people and we didn’t find the open person.”

The Terps’ offense wasn’t clicking in the first quarter, resulting in a deafening Hoosier rally. But Shyanne Sellers stymied the momentum dead in its tracks with a mid-range shot to end the period.

Despite the buzzer-beater, Maryland fell back into hard times. Angel Reese was particularly unable to combat the Hoosier defense. Her visible frustration following an 0-for-5 start led to a brief benching.

“That’s just [a part of] her maturation process,” Frese said. “She got caught up in the physicality, the lack of calls that she perceived that needed to be there.”

But upon her return to the floor, the sophomore layed the ball in through contact after collecting the Terps’ seventh offensive board, making it 24-17.

Two possessions later, she pulled off a beautiful euro-step — much to the chagrin of Hoosier fans wanting a travel call.

Facing a nine-point deficit with four minutes to go, Maryland began to gain some consistency on offense, only for it to quickly evaporate. Indiana ended the half on a frenetic 4-0 run. There was no last-second shot to save the Terps this time, leaving them with more questions than answers heading into the locker room in a 34-25 hole.

The defensive energy continued out of the intermission, with Maryland holding a slim 4-3 advantage through the first four minutes of the third quarter.

Ashley Owusu showed flashes of being the aggressor in the first half. And on back-to-back possessions in the third, the powerful guard took on Berger and Chloe Moore-McNeil — the latter of which resulted in two free throws.

The four-point run by Owusu ignited the rest of the lineup thereafter. Mimi Collins hit a long two with 4:05 left to cut the deficit to four. A steal by Katie Benzan then set up the fast break layup for Owusu, making it a 41-39 game.

Despite all the momentum built by the Terps in the quarter, it ended on a sour note. Berger stripped Owusu with seconds left on the clock, just enough time for her to go the length of the court and lay in a buzzer beater. The play capped off a 6-2 run to end the third for Indiana.

“Our mentality was one, to be aggressive and two, to take some calculated risk in terms of blitzing and trying to get in gaps,” Indiana coach Teri Moren said.

Moore-McNeil hit an emphatic three to kick off the fourth, which the Hoosiers used to build up its lead to seven at the midway point of the quarter.

Maryland was playing Indiana’s game throughout the contest, but no time was it more prominent than in the final quarter of action.

“Maryland has always been the bar. They tell you ‘they’re not’ and I think ‘they’re lying,'” Moren said. “A team that has all the pieces to get to the Final Four.”

On twelve attempts, the Terps failed to connect on a single three-point field goal. They will now have to wait to see if it will host any NCAA Tournament games.