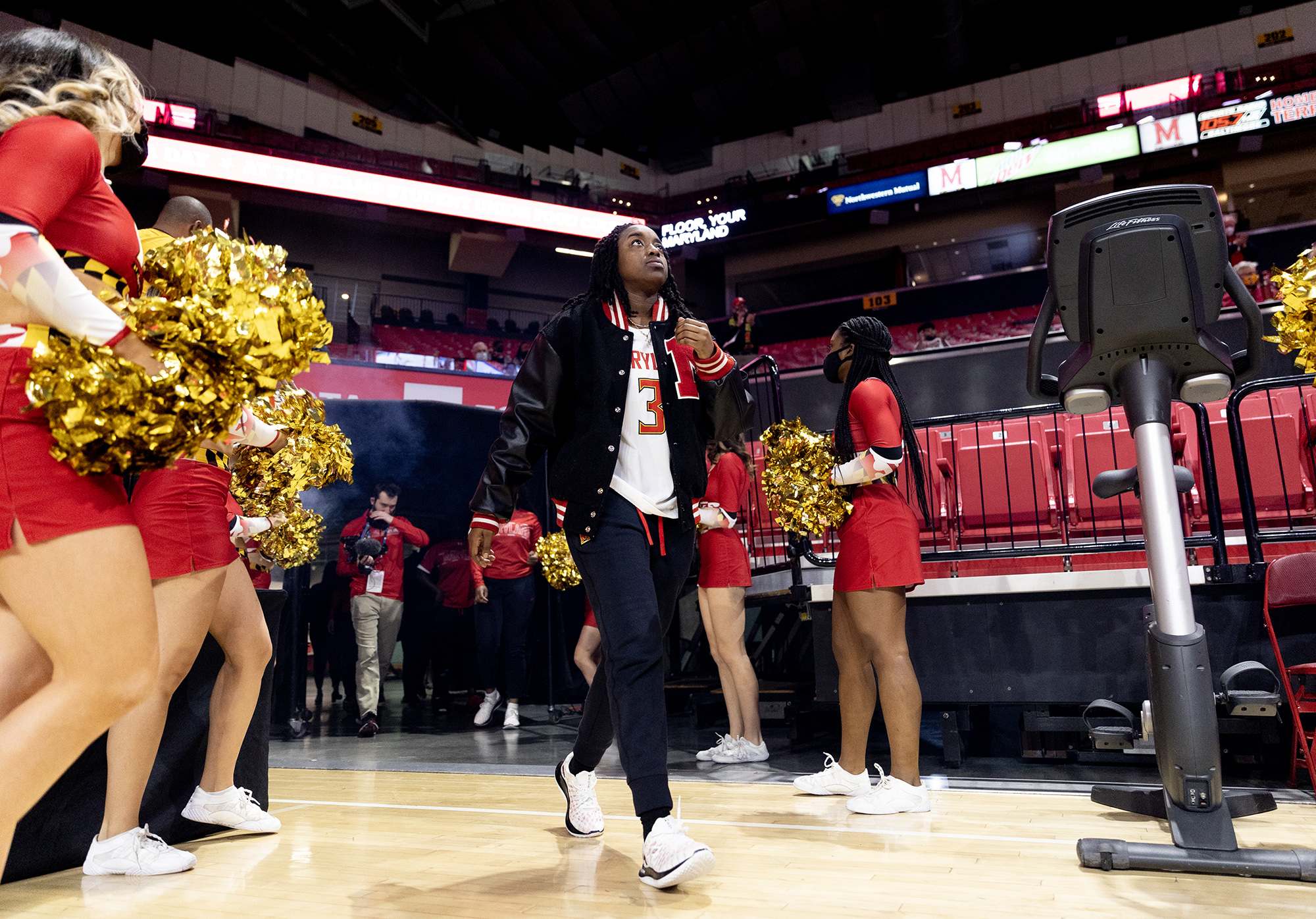 On Feb. 2, Maryland women’s basketball guard Channise Lewis took to Instagram to announce she was going to sit out for the remainder of the season. The fifth year floor general was recovering from a season-ending knee injury suffered on Jan. 7, 2021, against Michigan State.

The decision to call it a season — and ultimately a collegiate career — was all about prioritizing her health. The Miami product leaned on guidance from her mother, Ivy, throughout not just the most recent recovery process, but also her first knee injury back in October 2019.

“Attacking the day no matter what the situation is,” Lewis said. “Her not seeing me on the court anymore was tough, but she also saw the game from a different perspective.”

Seeing things from a new point of view runs in the family.

Throughout this season, Lewis has occupied a key advisory role on the bench. Her unique perspective from the sidelines has resulted in her maturity and wisdom blossoming. With complete trust and leeway from coach Brenda Frese and the rest of the coaching staff, Lewis has impacted individuals on the court in ways others can’t.

With Frese and the rest of the coaching staff needing to address the team as a whole during games and practices, Lewis finds the time to speak with individuals behind the scenes and build relationships off the court.

“Channise is always in my ear, definitely like a big sister to me,” freshman Shyanne Sellers said. “She’s not very loud, but she definitely has the best advice.”

This coaching approach has been the most rewarding part of her time away from the court — she chooses to credit all the coaches as opposed to one particular mentor.

“I took something away from [each of the coach’s] coaching style,” Lewis said. “Seeing them during games like during timeouts and how they look at the game, totally different from each other. That’s what balanced the coaching staff out here.”

This lead-by-example approach has paid significant dividends for the Terps this season.

After stumbling to start Big Ten play, Maryland rattled off eight consecutive wins, including nine of its last 10 regular season games, to reestablish itself as a perennial threat in the conference.

Lewis’ approach wasn’t the sole contributor to the team’s string of success, but the personal advice distributed to each player served a pivotal role in the team’s turnaround.

“For example, I’ll go to Angel and say, ‘You need to box out better,’ or ‘You need to set screens better,’” Lewis said. “‘Chloe, hey, use your advantage of your length to shoot over the smaller defenders.’ ‘Ashley you need to attack. Watch the charges, slow up a little bit.’”

Lewis’ leadership is unique because she can approach each and every player with helpful advice, regardless of position. The valuable extra set of eyes is a result of the role Lewis held during her playing career at Maryland.

“As a point guard, you have to see the game as a whole, so you’re pretty much playing every position,” Lewis said

Through surveying the court and understanding each position’s tendencies, Lewis developed rapport with the entire lineup. This further established Lewis as a vital piece for the team despite not logging any minutes.

“She has always continued to stay that steady, consistent leader for us, and honestly we need that experience, that leadership, that maturity, that she continues to bring,” Frese said. “She has been a big influence day in and day out on our players.”

Bibby added, “Just her basketball IQ and her wisdom of the game … it’s a great asset to our team.”

The ability to connect with her teammates and coaches has given Lewis several paths to choose from upon leaving College Park.

The options are endless. From building on her experience this season and getting into coaching, continuing to pursue a playing career overseas, or even expanding her cooking company, Ary’s Trin-Lu Kitchen.

Ary’s Trin-Lu Kitchen is a self-started fusion of Trinadadian and St. Lucian cuisine, rooted within her mother’s and father, Carlisle’s, heritage. Lewis has always had a fondness for being creative in the kitchen, but during the COVID-19 pandemic, she expanded her area of expertise to new heights.

Specialties such as oxtail and jerk shrimp pasta (a.k.a. Rasta Pasta) have reached the masses, with her company’s Instagram having surpassed 150 followers. Lewis catered her brother’s wedding and has even indulged her fellow teammates.

It’s clear that Lewis is as selfless as they come. In the kitchen, as a facilitating point guard, and now as an extra assistant coach in Frese’s arsenal.

“I can’t say enough about her loyalty,” Frese said. “Everyday comes in the same mood and gives great nuggets, great pieces of advice.”

Whichever road Lewis chooses to embark down next, she is primed to make a monumental impact on the people around her. For now, however, her veteran leadership for the national title-hopeful Terps will only gain importance down the stretch.