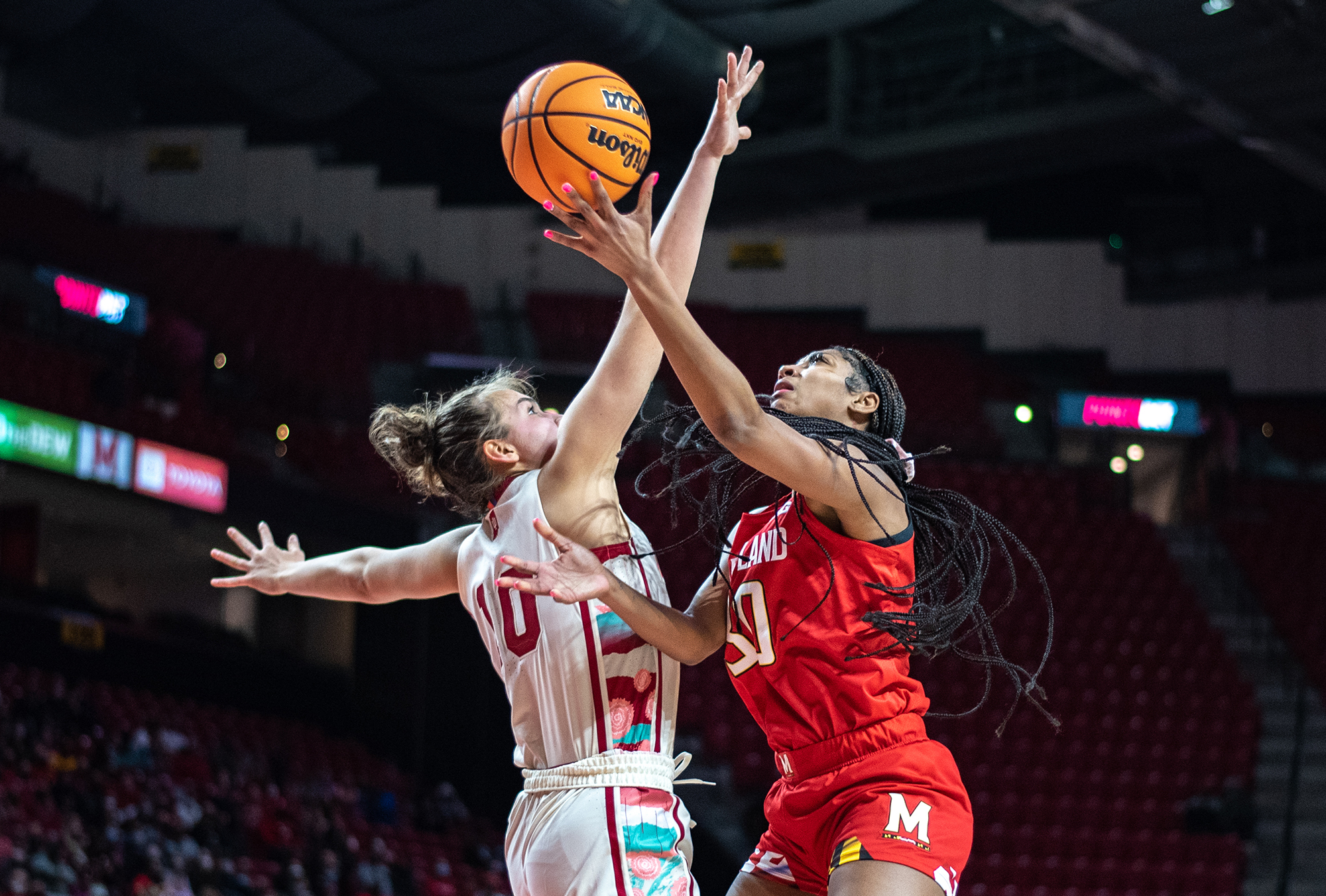 Angel Reese lunged toward Caitlin Clark. Her hand darted out and knocked the Iowa guard’s dribble off her own thigh and out of bounds.

As the referee pointed toward her team’s basket, Reese sprinted in elation. Her right arm extended in the air in a moment the Maryland women’s basketball sophomore cites as her favorite plays from her favorite win of the season.

It’s also a play that may have sealed her case as the Terps’ best two-way player. Heading into the Big Ten tournament, Reese leads Maryland in a host of statistical categories and was the lone Terp on the All-Big Ten first-team.

Defense has become Reese’s calling card — and with good reason. The Baltimore native was named to the All-Big Ten All-Defensive Team and is one of ten finalists for the Naismith Defensive Player of the Year award.

Reese has been stealing basketballs since elementary school. At that point she hadn’t hit her growth spurt, so she found her game as a scrappy guard.

“I used to play with boys,” Reese said. “So I have to be aggressive with them and playing even with my brother, I tried to do that too.”

Even now, Reese calls herself a “big guard.”

On the surface, the claim seems a bit outrageous for a player who’s scored many of her points as putbacks after offensive rebounds. However, for Reese, there are parts of her game that still fit under that title.

“Right now I’m playing a position where I’m just doing my job and doing whatever is best for the team,” Reese said. “I consider myself as a big guard … I can guard all five positions, I can see the floor like a point guard, so I think that helps me a lot.”

There are parts of her game that still need to be improved to get to that point. Reese has rarely attempted a shot from outside the paint and she’s just 1-of-9 from behind the three-point line for the entire season. She and coach Brenda Frese have already discussed that as an area for her to work on this summer.

Reese made it clear that her long-term position isn’t the center. She’s got an array of post moves, but she’s similarly adept at taking players off the dribble.

“I am skinny too, so I don’t see myself banging with Elizabeth Cambage, that’s not my position,” she said. “They’re true fives. I see myself playing the three four when I get to the league.”

Candace Parker was a name Reese brought up as a potential blueprint for her if she fulfills her goal to make the WNBA. Parker and Reese boast similar physical profiles at 6-foot-4 and 6-foot-3 respectively, but their statistical and skill profiles wildly differ.

It’s not going to be easy or immediate for Reese to get there, but summer brings a wealth of opportunities.

A year ago, she was struggling after a broken foot and spent most of the offseason trying to regain her confidence. This year, she can head into the summer with the goal of adding to her skillset.

She’s also in a better space to receive criticism that can help her improve, Frese noted.

“She’s much more coachable, she kind of understands different things. When you’re critiquing her game, it’s not as personal. I think she really understands that coaches are trying to bring out the best of her,” Frese said. “She just really has grown from a maturation level.”

Reese wasn’t surprised when she wasn’t listed for a single preseason award — after all, she barely played her freshman year.

After her performances this year, she’s almost guaranteed to be considered next year, but Reese isn’t done yet; she’s still looking for the next steps in her game.

Even after all her success this season, she was clear that this was just the beginning, a chilling thought for the rest of the Big Ten.