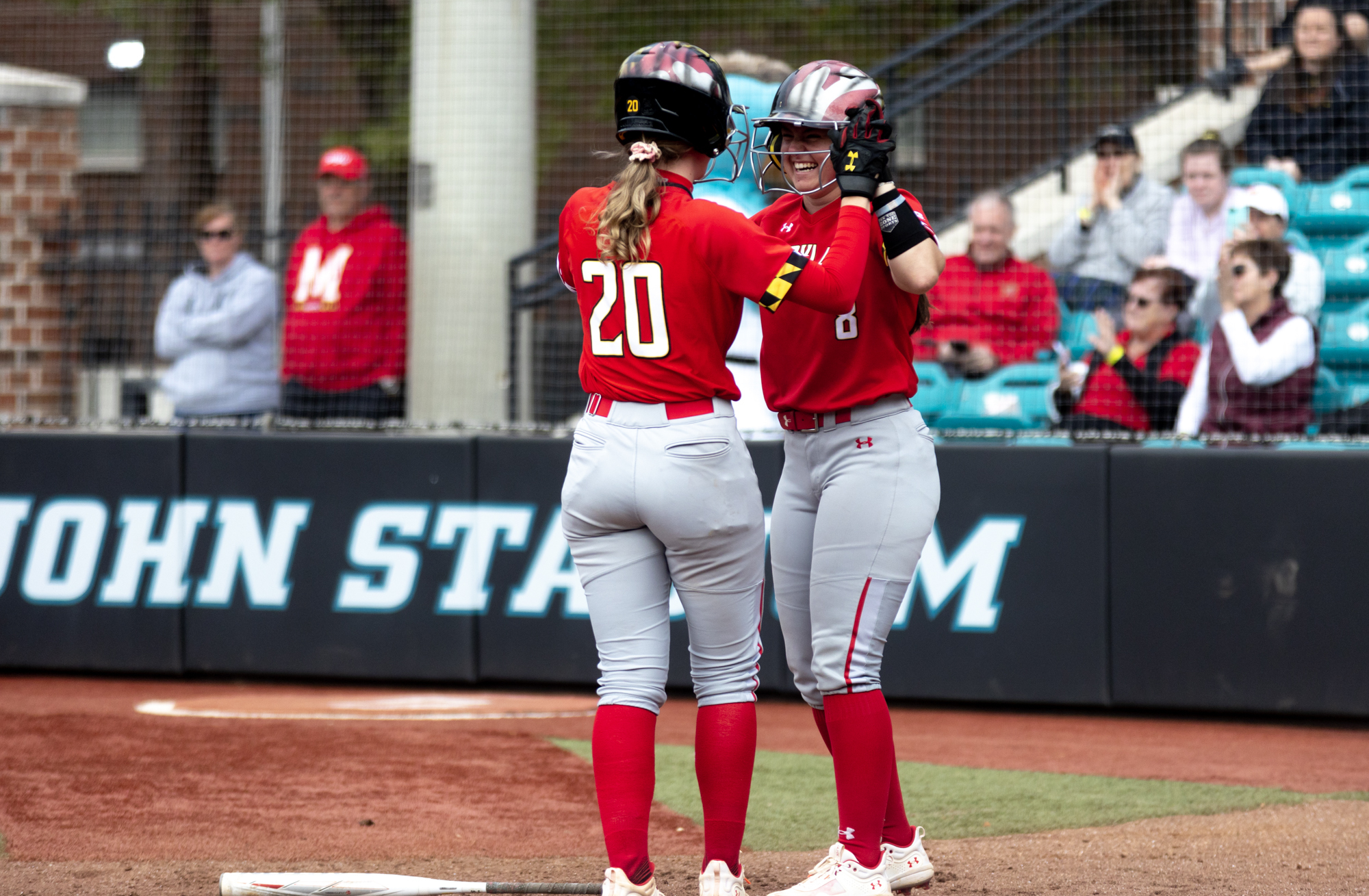 Michaela Jones and Campbell Kline were all smiles as the pair met at home plate for a high five. Jones tapped her foot on the plate and the two celebrated.

A long-shot from Jones notched the first of a three-run inning for Maryland softball that helped deliver the Terps their second victory of the day.

For the first time this season, Maryland won both legs of a doubleheader with triumphs over North Carolina A&T and Coastal Carolina in the Chanticleer Showdown.

The Terps faced the Aggies in the opening game of the day. Haley Ellefson drew the start and pitched the entirety of the matchup, going seven innings while only allowing one run. The senior was able to notch four strikeouts in Maryland’s 7-1 win.

It was coach Mark Montgomery’s squad that struck first with a trio of runs in the third inning. Three straight singles to lead-off the frame loaded the bases for the Terps, and back-to-back sacrifice flies from outfielders Jaeda McFarland and Megan Mikami ended with two runs.

Infielder Mackense Greico knocked the final scorer of the inning in with a two-out single up the middle.

North Carolina A&T pulled one back in the bottom of the fourth after an error from shortstop Ruby Butler, but that was all the Aggies could scrape together. While Ellefson gave up nine hits, Maryland was stingy with runners in scoring position.

The Terps would add two runs a piece in the fifth and sixth innings. Mikami and Greico each had RBI singles on North Carolina A&T’s Marian Headen.

Despite letting two baserunners on in the seventh inning, Ellefson got out of the situation and Maryland rolled onto its second game of the day with a victory in its pocket.

It was the Terps who once again found paydirt first against the Chanticleers, as Greico whacked her third RBI-hit of the day that scored McFarland and Kiley Goff.

Back to the plate in the fourth, Jones got her lead-off home run to left field, putting Maryland up three. A well-worked inning of work from Kline, Butler and Goff set up McFarland for an RBI-single.

Goff found her way home off of a groundout by Mikami, but the Terps had already rushed out to a five-run lead.

[Maryland softball has struggled at the plate this season. Its speed makes up for it.]

Even the Chanticleers who made it on base were quickly sent back to the dugout — the junior kept runners out of scoring position until the fifth inning.

Coastal Carolina found its first run in the fifth, advancing Maddy Jennings around the bases. The following inning saw a solo shot from Abbey Montoya that put the Chanticleers within striking distance.

However, Schlotterback forced three pop outs to close out the sixth inning. She came back in to retire Jay Wrightsman in the seventh before giving way to Ellefson.

Ellefson struck out her first batter before allowing a hit to left field. But her next opponent, in Montoya, flew out to left and Maryland secured its second win of the day, 5-2.

The wins push the Terps to a winning record for the first time all season, at 7-6. Maryland will face North Carolina A&T one more time Sunday, but with two wins Saturday, the Terps will already exit the Chanticleer Showdown with a positive record.