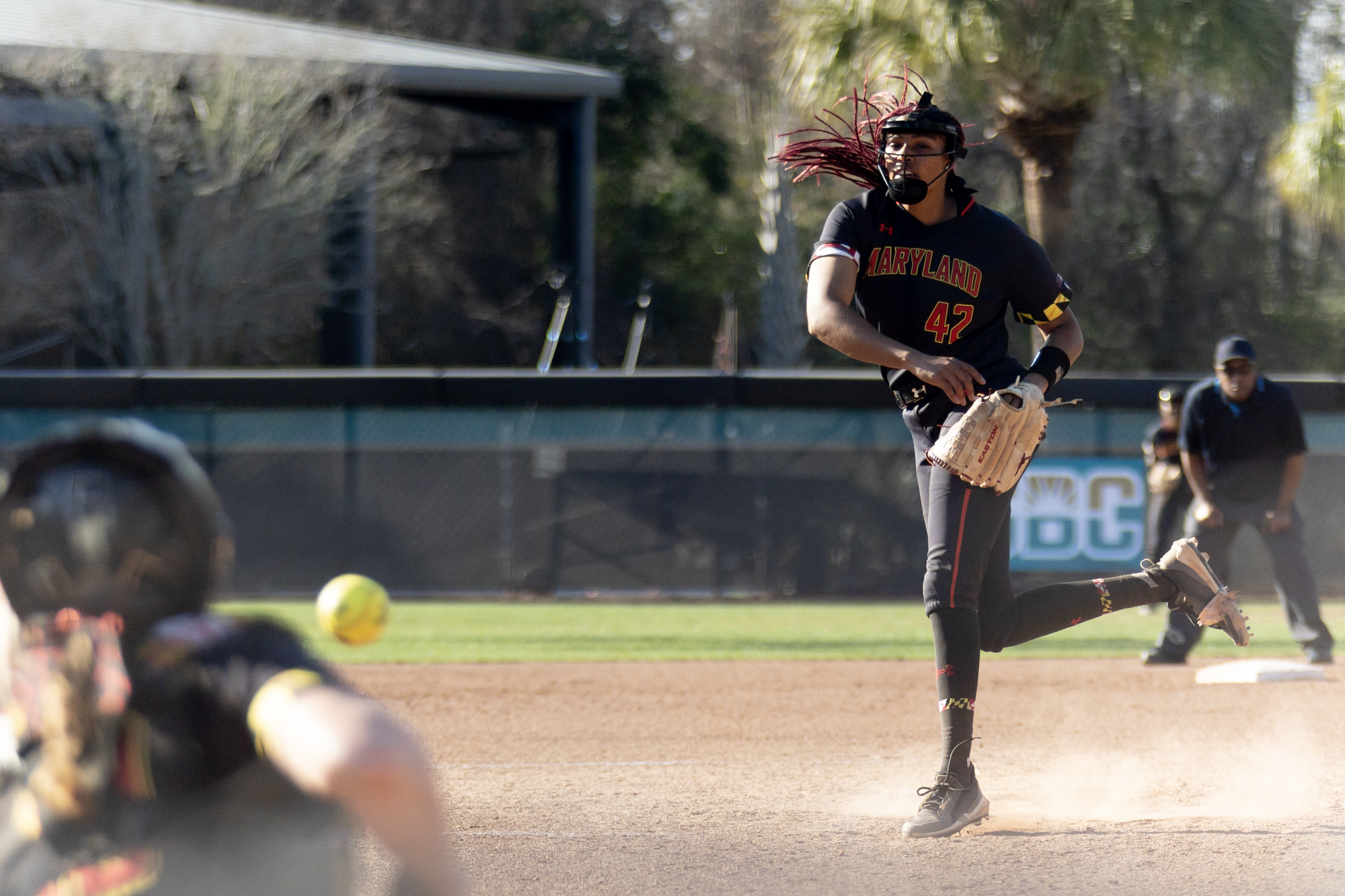 With two runs already scored in the top of the sixth, Mackense Greico stepped into the batter’s box looking to do more damage to Monmouth. Greico blasted one to left field for a two-run home run to extend Maryland’s lead to seven, 9-2.

Greico, who already homered once in the Terps’ match with Monmouth, smacked their third home run of the day. And Maryland wasn’t done. It added five runs to its lead in the seventh inning to beat the Hawks in dominant fashion.

In Maryland’s first game of the day against Central Michigan, the Terps got on the board first.

Jaeda McFarland led off in the bottom of the first inning with a hit by pitch, and then displayed her speed as she stole her fourth base of the season and advanced to third on the throw. Megan Mikami followed with a sac-fly, bringing home McFarland for the first run of the game.

The Chippewas responded in the top of the third with a bang. After Abbey Tolmie reached base on an error by Michaela Jones, Shannon Stein crushed one over the center field wall for a two-run homer.

Maryland quickly tied the game in the bottom half of the third. With two runners on and only one out, Mikami singled to score Jones from second and tie the game at two apiece.

In the top of the fourth, Central Michigan regained its lead. Tolmie stepped into the batter’s box with runners on the corners and two outs. She singled to short to give the Chippewas their third run of the game and the lead, 3-2. Stein scored her team’s fourth run of the game on an RBI double to left field.

[Maryland softball has struggled at the plate this season. Its speed makes up for it.]

The Terps started the bottom of the fourth with back-to-back singles and a walk to load the bases. Taylor Liguori, who pinch hit for Campbell Kline, struck out for the first out. That sent Michaela Jones up to bat looking to do damage.

During Jones’ at-bat, a throwing error by Central Michigan’s catcher, Samantha Mills, allowed leading runner Kamryn Davis to score from third. Right after, Jones flied out to right field for a sac-fly, tying the game at four.

The Chippewas responded with a run on an RBI flyout in the top of the fifth frame to regain the lead, 5-4.

Neither team scored again and Maryland started its weekend with a 5-4 loss.

Trinity Schlotterbeck picked up another loss for the Terps after giving up all five runs (four earned) in four innings.

Like in its earlier game, Maryland took an early lead.

With one out in the bottom of the first, Mikami walked and came around to score without the ball ever being put in play. Mikami stole second, advanced to third on a wild pitch and then scored from third on a separate wild pitch to put Maryland in front, 1-0.

Right after Mikami scored, Greico blasted a homer over the fence to give Courtney Wyche a two run cushion before stepping foot in the circle.

Monmouth responded quickly in the bottom of the first inning. The first two batters reached base on a walk and an error, then a Julia Thuer RBI single brought home the Hawks first run of the game.

[After a slow start to The Spring Games, Maryland softball’s resilience flipped the script]

Later in the inning, with the bases loaded and two outs, Danielle Dominik singled up the middle with the potential to take the lead. But Devin Coia was thrown out trying to go from second to home, keeping the game tied entering the second.

McFarland broke the tie and put the Terps in front 3-2 in the top of the second frame. McFarland doubled with two outs to score Ruby Butler from second.

The score remained 3-2 until the fifth, when Maryland added a few insurance runs. With one runner on and one out in the inning, Haley Ellefson homered to right center, extending the Terps lead to three, 5-2.

The next inning, the Terps added more runs to their lead. After a leadoff double, McFarland singled to drive home Maryland’s sixth run of the game. The next batter, Mikami, singled to short, scoring McFarland. Greico followed with a two-run blast to left field. Through a span of four batters, Maryland’s lead more than doubled.

But the Terps weren’t content with their large lead. An error by Monmouth, two RBI singles, an RBI groundout, and a wild pitch brought home five Terps in the inning. Entering the bottom of the seventh, Maryland led 14-2.

Wyche gave up two runs to the Hawks on a double in the bottom of the seventh, but still closed out Maryland’s victory. Wyche went the distance for the Terps, allowing only 4 runs, none earned, and struck out ten.