Maryland softball has struggled at the plate this season. Its speed makes up for it. 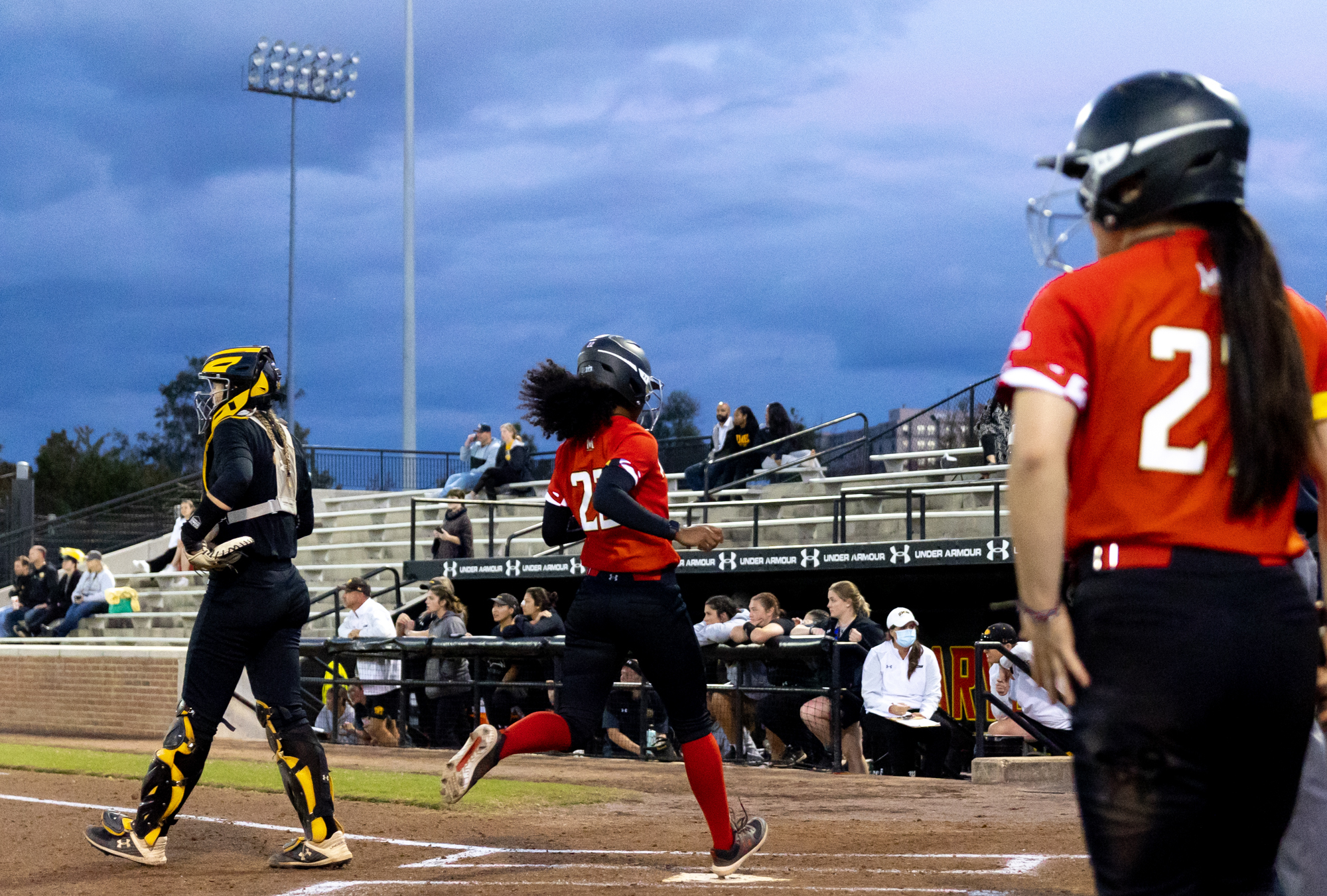 Maryland softball has struggled with its power early in the season. The Terps are one of two teams in the Big Ten with only one home run thus far, are bottom two in both slugging percentage and total bases and rank last in doubles.

The lack of consistency and power from the Terps’ bats have left their pitchers high and dry in the circle because the offense doesn’t tend to provide much run support. Pitcher Courtney Wyche says the pitching staff’s focus needs to be high “whether [they’re] scoring a lot or a little bit.”

What Maryland has done to counter its lack of pop at the plate has been no secret. The Terps plan to use their speed often and in creative ways to manufacture runs.

Last year, Maryland ranked third in the Big Ten in both steals and steal attempts as its lack of power showed last year as well. Coach Mark Montgomery attempted double-digit steals with three different players in 2021, and he’s continued his aggressive mentality on the bases this season.

It doesn’t matter who is on base for the Terps — the threat of a steal is always imminent, especially when Montgomery feels the need to manufacture a run.

“We try to take extra bases, we try to force the action sometimes and it’s just part of our nature and how we train the program to be,” Montgomery said.

[After a slow start to The Spring Games, Maryland softball’s resilience flipped the script]

Maryland’s speed on the basepaths was displayed in its very first game of the season against No. 18 Tennessee. Montgomery put on a double steal, resulting in Maryland’s lone run of the game.

In the Terps’ second game of their doubleheader against UNC Greensboro, Kline stole second and eventually scored Maryland’s first run of the game. She began the rally that prompted the Terps’ 5-3 win.

Maryland notched six stolen bases and the Terps scored 11 runs against Bethune-Cookman, their highest scoring outcome thus far. Five of the six steals led to runs, and on two occasions, Montgomery called for steals of home. Both attempts were successful, and the Terps manufactured two runs without having to lift the bat off their shoulders.

Overall this season, Maryland has stolen at least one base in all but one game. In both of the Terps’ two games with at least three steal attempts, they’ve scored in the double digits.

This year, the Terps tie for second among Big Ten schools in successful steals and second for stolen base attempts. Maryland has over twice as many steals as doubles. Maryland’s speed is turning singles into doubles with stolen bases, working as a replacement for the lack of pop in the lineup.

One of the ways Montgomery utilizes his squad’s speed is with his “ground ball go” philosophy. In Maryland’s 1-0 win against No. 17 Missouri, the Terps were in “ground ball go” mentality in the final at-bat of the game.

“The ball ended up being hit for a single but [in] the moment we read it down on the ground we were taking off,” Montgomery said. “We were going to force the action at the plate just because we felt like we had a really fast runner at third. We felt like that’s what we needed to do to win that game.”

Stolen bases and Montgomery’s “ground ball go” strategy are not the only ways Maryland is using its speed as an advantage. The Terps are looking to take an extra base at every opportunity.

Maryland has been a team lacking power. The Terps have used their speed to counteract their flaws on offense and, in doing so, have made their speed one of their best strengths and the team’s biggest X-Factor.

“We practice base running every day. It’s part of our practice plan every single day,” Montgomery said.